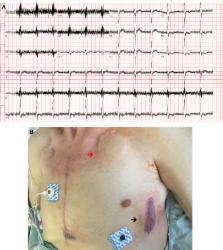 A A Obwegeser,  R Uitti,  M F Turk … (2001)
Thalamic deep brain stimulation is becoming increasingly popular for the control of drug-refractory tremor. Implantable cardiac pacemakers and defibrillators are commonly used therapeutic modalities. Concerns exist about the potential interactions between these 2 devices in the same patient, but no experience has been reported previously. We describe a patient with essential tremor who had a deep brain stimulator implanted into the left ventral intermediate nucleus of thalamus, who subsequently needed an implantable cardioverter-defibrillator. Despite concerns about possible interactions between the 2 types of implanted electrical devices (i.e., a situation similar to drug-drug interactions), the deep brain stimulator and the implanted pacemaker-defibrillator functioned appropriately, and no interaction occurred in our patient.

Implantation of a cardiac resynchronization therapy defibrillator in a patient with bilateral deep brain stimulator: feasibility and technique.

Ashkan Karimi,  Jamie B Conti,  Thomas Beaver (2012)
Uncommonly, a patient with a NeuroStimulator Device (NSD) for a neurologic indication requires a cardiovascular implantable electronic device (CIED) for a cardiac indication. Typically in those with a unilateral pectoral NSD, the contralateral pectoral space is used for CIED implantation; however, in very rare occasions the patient has bilateral pectoral NSDs which makes subsequent implantation of a CIED challenging both because of placement and device interaction. Herein, we introduce the case of a 68-year-old gentleman with bilateral pectoral deep brain stimulators for Parkinsonism who received cardiac resynchronization therapy-defibrillator (CRT-D) for advanced heart failure. The CRT-D generator was implanted in the abdomen and the CRT-D leads were placed through a minimally invasive epicardial approach. Both devices were tested without any evidence of device interaction.