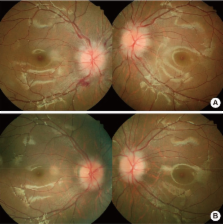 Petrous apicitis is a rare but fatal complication of otitis media. An infection within the middle ear can extend within the temporal bone into the air cells of the petrous apex. With only the thin dura mater separating the trigeminal ganglion and the 6th cranial nerve from the bony petrous apex, they are vulnerable to inflammatory processes, resulting in deep facial pain, lateral rectus muscle paralysis, and diplopia. In 1904, Gradenigo described a triad of symptoms related to petrous apicitis, including acute suppurative otitis media, deep facial pain resulting from trigeminal involvement, and abducens nerve palsy. It has traditionally been treated with surgery, but recent advances in imaging, with improved antibiotic treatment, allow conservative management. In this case report, we describe a clinical and neuroradiological evolution of a child with a petrous apicitis after acute otitis media, which was managed medically with a positive outcome.

Intratemporal complications of acute otitis media in infants and children.

M Casselbrant,  M Kurs-Lasky,  Charles Bluestone … (1998)
We reviewed our experience with 100 children admitted to Children's Hospital of Pittsburgh between 1980 and 1995 with an intratemporal complication of acute otitis media. Seventy-two patients were treated for acute mastoiditis. Of these 72 children, 54 (75.0%) were treated conservatively with broad-spectrum intravenous antibiotics and myringotomy. Eighteen (25.0%) required mastoidectomy for treatment of a subperiosteal or Bezold's abscess or cholesteatoma, or because of poor response to conservative therapy. Twenty-two children presented with facial paralysis, complete in 5 (22.7%) and incomplete in 17 (77.3%). Eighteen (81.8%) were treated conservatively, but four required mastoid surgery. Nineteen patients had adequate follow-up; of these, 15 recovered normal facial function but 4 were left with partial paralysis. Three patients presented with serous labyrinthitis and recovered completely with conservative therapy. Of the two patients who presented with suppurative labyrinthitis, one was treated conservatively, but the other required tympanomastoidectomy with cochleotomy; both patients had permanent, profound sensorineural hearing loss in the affected ear. Four patients presented with acute petrositis, and in all four it resolved with mastoidectomy. In the antibiotic era, intratemporal complications of acute otitis media still occur in otherwise healthy children, often after inadequate treatment of acute otitis media.

Cause and prognosis of nontraumatic sixth nerve palsies in young adults.

George Peters,  Sophie Bakri,  Gregory B. Krohel (2002)
To review the causes and prognosis of sixth nerve palsies in patients who are 20 to 50 years of age. Retrospective, noncomparative case series. All patients aged 20 to 50 years with a nontraumatic sixth nerve palsy seen in a neuro-ophthalmic practice from 1994 to 2000. Diagnostic testing to determine the cause of the palsy and surgical intervention to correct persistent stable strabismus. Cause of the palsy. The patients' clinical courses were reviewed. The most common cause for a sixth nerve palsy in this age group was a central nervous system (CNS) mass lesion, although the most common cause for an isolated sixth nerve palsy in this age group was multiple sclerosis. Patients with a CNS mass lesion responsible for their palsy had the highest rate of nonresolution requiring strabismus surgery. Sixth nerve palsies are unusual in young adults, but in the practice of author (GBK) most are secondary to CNS mass lesions and, when isolated, multiple sclerosis. Deferring neuroimaging or other appropriate investigations presuming a microvascular cause for the palsy in this age group is not recommended.

MRSA with progression from otitis media and sphenoid sinusitis to clival osteomyelitis, pachymeningitis and abducens nerve palsy in an immunocompetent 10-year-old patient.

This is an open-access article distributed under the terms of the Creative Commons Attribution Non-Commercial License ( http://creativecommons.org/licenses/by-nc/3.0/) which permits unrestricted non-commercial use, distribution, and reproduction in any medium, provided the original work is properly cited.