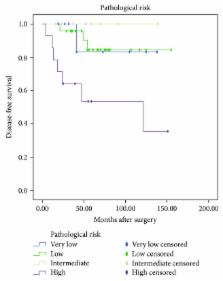 Prognosis for DGIST treated by R0 resection is favorable. High level of Ki-67 can be an independent risk factor of DGIST prognosis. Adjuvant imatinib therapy for patients with tumor recurrence could probably lead to prolonged survival.

Markku Miettinen,  Jerzy Lasota (2006)
Gastrointestinal (GI) stromal tumors (GISTs) are the most common mesenchymal tumors specific to the GI tract, generally defined as KIT (CD117)-positive tumors with a characteristic set of histologic features. These tumors, derived from Cajal cells or their precursors, most commonly occur at the age >50 years in the stomach (60%), jejunum and ileum (30%), duodenum (4-5%), rectum (4%), colon and appendix (1-2%), and esophagus ( 5 per 50 HPFs and >5 cm in diameter have a high risk for metastasis. In contrast, all intestinal GISTs >5 cm independent of mitotic rate have at least moderate risk for metastases, and all >5 mitoses per 50 HPFs have a high risk for metastases. Intestinal GISTs < or =5 cm with < or =5 mitoses per 50 HPFs have a low risk for metastases. Gastric GISTs can be divided into histologic subgroups including 4 spindle cell and 4 epithelioid variants. Intestinal GISTs are a histologically more homogeneous group and often contain distinctive extracellular collagen globules, skeinoid fibers. Immunohistochemical demonstration of KIT, CD34, or protein kinase theta positivity helps to properly identify these tumors.

Ronald DeMatteo,  Karla V. Ballman,  Cristina R Antonescu … (2009)
Gastrointestinal stromal tumour is the most common sarcoma of the intestinal tract. Imatinib mesylate is a small molecule that inhibits activation of the KIT and platelet-derived growth factor receptor alpha proteins, and is effective in first-line treatment of metastatic gastrointestinal stromal tumour. We postulated that adjuvant treatment with imatinib would improve recurrence-free survival compared with placebo after resection of localised, primary gastrointestinal stromal tumour. We undertook a randomised phase III, double-blind, placebo-controlled, multicentre trial. Eligible patients had complete gross resection of a primary gastrointestinal stromal tumour at least 3 cm in size and positive for the KIT protein by immunohistochemistry. Patients were randomly assigned, by a stratified biased coin design, to imatinib 400 mg (n=359) or to placebo (n=354) daily for 1 year after surgical resection. Patients and investigators were blinded to the treatment group. Patients assigned to placebo were eligible to crossover to imatinib treatment in the event of tumour recurrence. The primary endpoint was recurrence-free survival, and analysis was by intention to treat. Accrual was stopped early because the trial results crossed the interim analysis efficacy boundary for recurrence-free survival. This study is registered with ClinicalTrials.gov, number NCT00041197. All randomised patients were included in the analysis. At median follow-up of 19.7 months (minimum-maximum 0-56.4), 30 (8%) patients in the imatinib group and 70 (20%) in the placebo group had had tumour recurrence or had died. Imatinib significantly improved recurrence-free survival compared with placebo (98% [95% CI 96-100] vs 83% [78-88] at 1 year; hazard ratio [HR] 0.35 [0.22-0.53]; one-sided p<0.0001). Adjuvant imatinib was well tolerated, with the most common serious events being dermatitis (11 [3%] vs 0), abdominal pain (12 [3%] vs six [1%]), and diarrhoea (ten [2%] vs five [1%]) in the imatinib group and hyperglycaemia (two [<1%] vs seven [2%]) in the placebo group. Adjuvant imatinib therapy is safe and seems to improve recurrence-free survival compared with placebo after the resection of primary gastrointestinal stromal tumour. US National Institutes of Health and Novartis Pharmaceuticals.

Gastrointestinal stromal tumors of the stomach: a clinicopathologic, immunohistochemical, and molecular genetic study of 1765 cases with long-term follow-up.

Jerzy Lasota,  Markku Miettinen,  Leslie Sobin (2004)
Gastrointestinal (GI) stromal tumors (GISTs), the specific KIT- or PDFGRA-signaling driven mesenchymal tumors, are the most common mesenchymal tumors of the GI tract. In this study, we analyzed 1869 cases originally classified as smooth muscle tumors of the stomach and found that 1765 (94%) of these were GISTs. The GISTs had a slight male predominance (55%) with a median age of 63 years. Only 2.7% of tumors occurred before the age of 21 years and 9.1% before the age of 40 years. The tumors varied from 0.5 to 44 cm (median, 6.0 cm) and most commonly presented with GI bleeding; 12% were incidentally detected. Several histologic variants were recognized among the spindle cell tumors (sclerosing, palisaded-vacuolated, hypercellular, and sarcomatous) and of epithelioid tumors (sclerosing, dyscohesive, hypercellular, and sarcomatous). Outcome was strongly dependent on tumor size and mitotic activity. Only 2% to 3% of tumors 10 cm and >5 mitoses/50 HPFs metastasized. However, tumors >10 cm with mitotic activity 5/50 HPFs had a relatively low metastatic rate (11% and 15%). A small number of patients survived intra-abdominal metastasis up to over 20 years. Tumor location in fundus or gastroesophageal junction, coagulative necrosis, ulceration, and mucosal invasion were unfavorable factors (P <0.001), whereas tumor location in antrum was favorable (P <0.001). KIT expression was detected in 91% of the cases, CD34 in 82%, smooth muscle actin in 18%, and desmin in 5%; the latter two were favorable (P <0.001). KIT exon 11 mutations were detected in 119 cases; patients with point mutations fared better than those with deletions (P <0.01). PDGFRA exon 18 mutations (total 86 cases) were common in epithelioid GISTs and most commonly represented a D842V point mutation; none of these was prognostically significant. The above results may be helpful for setting the criteria for adjuvant treatment such as Gleevec.