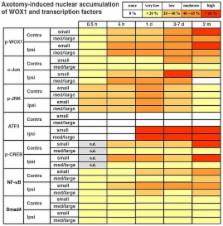 Tumor suppressor WOX1 (also named WWOX or FOR) is known to participate in neuronal apoptosis in vivo. Here, we investigated the functional role of WOX1 and transcription factors in the delayed loss of axotomized neurons in dorsal root ganglia (DRG) in rats.

Sciatic nerve transection in rats rapidly induced JNK1 activation and upregulation of mRNA and protein expression of WOX1 in the injured DRG neurons in 30 min. Accumulation of p-WOX1, p-JNK1, p-CREB, p-c-Jun, NF-κB and ATF3 in the nuclei of injured neurons took place within hours or the first week of injury. At the second month, dramatic nuclear accumulation of WOX1 with CREB (>65% neurons) and NF-κB (40–65%) occurred essentially in small DRG neurons, followed by apoptosis at later months. WOX1 physically interacted with CREB most strongly in the nuclei as determined by FRET analysis. Immunoelectron microscopy revealed the complex formation of p-WOX1 with p-CREB and p-c-Jun in vivo. WOX1 blocked the prosurvival CREB-, CRE-, and AP-1-mediated promoter activation in vitro . In contrast, WOX1 enhanced promoter activation governed by c-Jun, Elk-1 and NF-κB. WOX1 directly activated NF-κB-regulated promoter via its WW domains. Smad4 and p53 were not involved in the delayed loss of small DRG neurons.

Rapid activation of JNK1 and WOX1 during the acute phase of injury is critical in determining neuronal survival or death, as both proteins functionally antagonize. In the chronic phase, concurrent activation of WOX1, CREB, and NF-κB occurs in small neurons just prior to apoptosis. Likely in vivo interactions are: 1) WOX1 inhibits the neuroprotective CREB, which leads to eventual neuronal death, and 2) WOX1 enhances NF-κB promoter activation (which turns to be proapoptotic). Evidently, WOX1 is the potential target for drug intervention in mitigating symptoms associated with neuronal injury.

Function and regulation of CREB family transcription factors in the nervous system.

Bonnie Lonze, David D. Ginty (2002)
CREB and its close relatives are now widely accepted as prototypical stimulus-inducible transcription factors. In many cell types, these factors function as effector molecules that bring about cellular changes in response to discrete sets of instructions. In neurons, a wide range of extracellular stimuli are capable of activating CREB family members, and CREB-dependent gene expression has been implicated in complex and diverse processes ranging from development to plasticity to disease. In this review, we focus on the current level of understanding of where, when, and how CREB family members function in the nervous system.

Osuke Iwata, David Wolfer, Maria Hristova … (2004)
Nerve injury triggers numerous changes in the injured neurons and surrounding nonneuronal cells that ultimately result in successful target reinnervation or cell death. c-Jun is a component of the heterodimeric AP-1 transcription factor, and c-Jun is highly expressed in response to neuronal trauma. Here we have investigated the role of c-jun during axonal regeneration using mice lacking c-jun in the central nervous system. After transection of the facial nerve, the absence of c-Jun caused severe defects in several aspects of the axonal response, including perineuronal sprouting, lymphocyte recruitment, and microglial activation. c-Jun-deficient motorneurons were atrophic, resistant to axotomy-induced cell death, and showed reduced target muscle reinnervation. Expression of CD44, galanin, and alpha7beta1 integrin, molecules known to be involved in regeneration, was greatly impaired, suggesting a mechanism for c-Jun-mediated axonal growth. Taken together, our results identify c-Jun as an important regulator of axonal regeneration in the injured central nervous system.

These authors also contributed equally to this work.