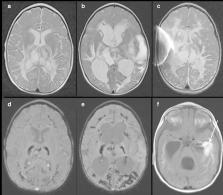 Revesz syndrome (RS) is an extremely rare variant of dyskeratosis congenita (DKC) with only anecdotal reports in the literature.

To further characterize the typical features and natural course of the disease, we screened the English literature and summarized the clinical and epidemiological features of previously published RS cases. In addition, we herein describe the first recorded patient in central Europe.

The literature review included 18 children. Clinical features are summarized, indicating a low prevalence of the classical DKC triad. All patients experienced early bone marrow failure, in most cases within the second year of life (median age 1.5 years; 95% CI 1.4–1.6). Retinopathy occurred typically between 6 and 18 months of age (median age 1.1 years; 95% CI 0.7–1.5). The incidence of seizures was low and was present in an estimated 20% of patients. The onset of seizures was exclusively during early childhood. The Kaplan–Meier estimate of survival was dismal (median survival 6.5 years; 95% CI 3.6–9.4), and none of the patients survived beyond the age of 12 years. Stem cell transplantation (SCT) was performed in eight children, and after a median of 22 months from SCT four of these patients were alive at the last follow up visit.

RS is a severe variant of DKC with early bone marrow failure and retinopathy in all patients. Survival is dismal, but stem cell transplantation may be performed successfully and might improve prognosis in the future.

Ken Nischal,  Caterina Garone,  Katrin Õunap … (2012)
Coats plus is a highly pleiotropic disorder particularly affecting the eye, brain, bone and gastrointestinal tract. Here, we show that Coats plus results from mutations in CTC1, encoding conserved telomere maintenance component 1, a member of the mammalian homolog of the yeast heterotrimeric CST telomeric capping complex. Consistent with the observation of shortened telomeres in an Arabidopsis CTC1 mutant and the phenotypic overlap of Coats plus with the telomeric maintenance disorders comprising dyskeratosis congenita, we observed shortened telomeres in three individuals with Coats plus and an increase in spontaneous γH2AX-positive cells in cell lines derived from two affected individuals. CTC1 is also a subunit of the α-accessory factor (AAF) complex, stimulating the activity of DNA polymerase-α primase, the only enzyme known to initiate DNA replication in eukaryotic cells. Thus, CTC1 may have a function in DNA metabolism that is necessary for but not specific to telomeric integrity.

Telomere length is associated with disease severity and declines with age in dyskeratosis congenita.

Amanda Walne,  Tom Vulliamy,  Richard Beswick … (2008)
Dyskeratosis congenita (DC) is a multisystem bone marrow failure syndrome characterized by a triad of mucocutaneous abnormalities and a predisposition to cancer. The genetic basis of DC remains unknown in more than 60% of patients. Mutations have been identified in components of the telomerase complex (dyskerin, TERC, TERT, NOP10, and NHP2), and recently in one component of the shelterin complex TIN2 (gene TINF2). To establish the role of TINF2 mutations, we screened DNA from 175 uncharacterised patients with DC as well as 244 patients with other bone marrow failure disorders. Heterozygous coding mutations were found in 33 of 175 previously uncharacterized DC index patients and 3 of 244 other patients. A total of 21 of the mutations affected amino acid 282, changing arginine to histidine (n = 14) or cysteine (n = 7). A total of 32 of 33 patients with DC with TINF2 mutations have severe disease, with most developing aplastic anaemia by the age of 10 years. Telomere lengths in patients with TINF2 mutations were the shortest compared with other DC subtypes, but TERC levels were normal. In this large series, TINF2 mutations account for approximately 11% of all DC, but they do not play a significant role in patients with related disorders. This study emphasises the role of defective telomere maintenance on human disease.