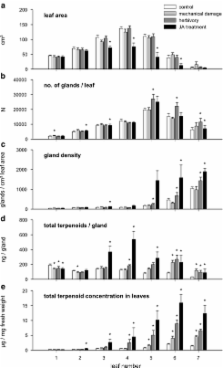 The subepidermal pigment glands of cotton accumulate a variety of terpenoid products, including monoterpenes, sesquiterpenes, and terpenoid aldehydes that can act as feeding deterrents against a number of insect herbivore species. We compared the effect of herbivory by Spodoptera littoralis caterpillars, mechanical damage by a fabric pattern wheel, and the application of jasmonic acid on levels of the major representatives of the three structural classes of terpenoids in the leaf foliage of 4-week-old Gossypium hirsutum plants. Terpenoid levels increased successively from control to mechanical damage, herbivory, and jasmonic acid treatments, with E-β-ocimene and heliocide H 1 and H 4 showing the highest increases, up to 15-fold. Herbivory or mechanical damage to older leaves led to terpenoid increases in younger leaves. Leaf-by-leaf analysis of terpenes and gland density revealed that higher levels of terpenoids were achieved by two mechanisms: (1) increased filling of existing glands with terpenoids and (2) the production of additional glands, which were found to be dependent on damage intensity. As the relative response of individual terpenoids did not differ substantially among herbivore, mechanical damage, and jasmonic acid treatments, the induction of terpenoids in cotton foliage appears to represent a non-specific wound response mediated by jasmonic acid.

The function of terpene natural products in the natural world.

Jonathan Gershenzon,  Natalia Dudareva (2007)
As the largest class of natural products, terpenes have a variety of roles in mediating antagonistic and beneficial interactions among organisms. They defend many species of plants, animals and microorganisms against predators, pathogens and competitors, and they are involved in conveying messages to conspecifics and mutualists regarding the presence of food, mates and enemies. Despite the diversity of terpenes known, it is striking how phylogenetically distant organisms have come to use similar structures for common purposes. New natural roles undoubtedly remain to be discovered for this large class of compounds, given that such a small percentage of terpenes has been investigated so far.

BIOSYNTHESIS AND ACTION OF JASMONATES IN PLANTS.

John E. Mullet,  Robert A. Creelman (1997)
Jasmonic acid and its derivatives can modulate aspects of fruit ripening, production of viable pollen, root growth, tendril coiling, and plant resistance to insects and pathogens. Jasmonate activates genes involved in pathogen and insect resistance, and genes encoding vegetative storage proteins, but represses genes encoding proteins involved in photosynthesis. Jasmonic acid is derived from linolenic acid, and most of the enzymes in the biosynthetic pathway have been extensively characterized. Modulation of lipoxygenase and allene oxide synthase gene expression in transgenic plants raises new questions about the compartmentation of the biosynthetic pathway and its regulation. The activation of jasmonic acid biosynthesis by cell wall elicitors, the peptide systemin, and other compounds will be related to the function of jasmonates in plants. Jasmonate modulates gene expression at the level of translation, RNA processing, and transcription. Promoter elements that mediate responses to jasmonate have been isolated. This review covers recent advances in our understanding of how jasmonate biosynthesis is regulated and relates this information to knowledge of jasmonate modulated gene expression.

Variation of glucosinolate accumulation among different organs and developmental stages of Arabidopsis thaliana.