Upregulation of STC2 in colorectal cancer and its clinicopathological significance 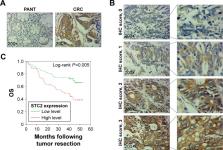 Stanniocalcin 2 (STC2) is a glycoprotein hormone involved in many biological processes and a secretory protein that regulates malignant tumor progression. The aim of the present study was to further explore the clinicopathological significance and prognostic role of STC2 in colorectal cancer (CRC).

In this study, STC2 expression was first investigated in Gene Expression Omnibus and The Cancer Genome Atlas, and then validated with the data from our medical center. Univariate and multivariate analyses were performed to assess the association between prognostic factors and survival outcome.

In Gene Expression Omnibus and The Cancer Genome Atlas databases, bioinformatics analysis confirmed that STC2 was significantly increased in CRC compared with that in normal tissues ( P<0.01), and CRC patients with high STC2 expression had a shorter overall survival. By analyzing data from our medical center, the results also showed that STC2 expression of CRC tissues was higher than that in normal tissues, whether the transcriptional or protein levels. In the CRC tissues, high STC2 expression was significantly correlated with lymph node metastasis ( P=0.047), distant metastasis ( P=0.040), and advanced clinical stage ( P=0.047). Moreover, Kaplan–Meier analyses indicated that high STC2 expression predicted a worse prognosis, and multivariate Cox regression analysis revealed that STC2 was an independent prognostic factor for overall survival (HR =1.976, 95% CI: 1.092–3.576, P=0.024) in patients with CRC.

Our results suggested that STC2 played an important role in CRC progression and prognosis, and could be a useful biomarker for survival prediction.

Kaoru Mogushi,  Toshiaki Ishikawa,  Hiroyuki Uetake … (2011)
This study aimed to identify a novel biomarker or a target of treatment for colorectal cancer (CRC). The expression profiles of cancer cells in 104 patients with CRC were examined using laser microdissection and oligonucleotide microarray analysis. Overexpression in CRC cells, especially in patients with distant metastases, was a prerequisite to select candidate genes. The mRNA expression of candidate genes was investigated by quantitative reverse transcriptase PCR (RT-PCR) in 77 patients as a validation study. We analyzed the protein expression and localization of the candidate gene by immunohistochemical study and investigated the relationship between protein expression and clinicopathologic features in 274 CRC patients. Using microarray analysis, we identified 6 candidate genes related to distant metastases in CRC patients. Among these genes, osteoprotegerin (OPG) is known to be associated with aggressiveness in several cancers through inhibition of apoptosis via neutralization of the function of TNF-related apoptosis-inducing ligand. The mRNA expression of OPG in cancer tissues was significantly higher in patients with distant metastases than those without metastases. Overexpression of OPG protein was associated with significantly worse overall survival and relapse-free survival. Moreover, overexpression of the OPG protein was an independent risk factor for CRC recurrence. Overexpression of OPG may be a predictive biomarker of CRC recurrence and a target for treatment of this disease. ©2011 AACR.

Evolution and roles of stanniocalcin.

B.H.Y. Yeung,  A.Y.S. Law,  Chris Wong (2012)
In fish, stanniocalcin-1 (STC1) is a key endocrine factor that acts on gill, intestine and kidney to regulate serum calcium and phosphate homeostasis. The recent identification and study of mammalian STCs (STC1 and STC2) revealed that the hormones are made in virtually all tissues and they act primarily as paracrine/autocrine factors to regulate various biological functions. Based on their ubiquitous expression patterns and generally undetectable levels in blood serum, it is unlikely that the mammalian STCs play important roles in serum Ca(2+)/P(i) homeostasis. However current evidences still support the local action of STCs in Ca(2+) and P(i) transport, probably via their action on Ca(2+)-channels and Na(+)/P(i) co-transporter. At present, information about the sequence, expression and distribution of the STC receptor(s) is lacking. However, recent emerging evidence hints the involvement of STC1 and STC2 in the sub-cellular functions of mitochondria and endoplasmic reticulum respectively, particularly responding to oxidative stress and unfolded protein response. With increasing evidence that demonstrates the local actions of STCs, the focus of the research has been moved to cellular inflammation and carcinogenesis. This review integrates the information available on STCs in fish and mammals, focusing mainly on their embryonic origin, tissue distribution, their potential regulatory mechanisms and the modes of action, and their physiological and pathophysiological functions, particularly in cancer biology. Copyright © 2011 Elsevier Ireland Ltd. All rights reserved.

Min Sun,  Haibin Song,  Shuyi Wang … (2017)
Background With persistent inconsistencies in colorectal cancer (CRC) miRNAs expression data, it is crucial to shift toward inclusion of a “pre-laboratory” integrated analysis to expedite effective precision medicine and translational research. Aberrant expression of hsa-miRNA-195 (miR-195) which is distinguished as a clinically noteworthy miRNA has previously been observed in multiple cancers, yet its role in CRC remains unclear. Methods In this study, we performed an integrated analysis of seven CRC miRNAs expression datasets. The expression of miR-195 was validated in The Cancer Genome Atlas (TCGA) datasets, and an independent validation sample cohort. Colon cancer cells were transfected with miR-195 mimic and inhibitor, after which cell proliferation, colony formation, migration, invasion, and dual luciferase reporter were assayed. Xenograft mouse models were used to determine the role of miR-195 in CRC tumorigenicity in vivo. Results Four downregulated miRNAs (hsa-let-7a, hsa-miR-125b, hsa-miR-145, and hsa-miR-195) were demonstrated to be potentially useful diagnostic markers in the clinical setting. CRC patients with a decreased level of miR-195-5p in tumor tissues had significantly shortened survival as revealed by the TCGA colon adenocarcinoma (COAD) dataset and our CRC cohort. Overexpression of miR-195-5p in DLD1 and HCT116 cells repressed cell growth, colony formation, invasion, and migration. Inhibition of miR-195-5p function contributed to aberrant cell proliferation, migration, invasion, and epithelial mesenchymal transition (EMT). We identified miR-195-5p binding sites within the 3’-untranslated region (3′-UTR) of the human yes-associated protein (YAP) mRNA. YAP1 expression was downregulated after miR-195-5p treatment by qRT-PCR analysis and western blot. Conclusions Four downregulated miRNAs were shown to be prime candidates for a panel of biomarkers with sufficient diagnostic accuracy for CRC in a clinical setting. Our integrated microRNA profiling approach identified miR-195-5p independently associated with prognosis in CRC. Our results demonstrated that miR-195-5p was a potent suppressor of YAP1, and miR-195-5p-mediated downregulation of YAP1 significantly reduced tumor development in a mouse CRC xenograft model. In the clinic, miR-195-5p can serve as a prognostic marker to predict the outcome of the CRC patients. Electronic supplementary material The online version of this article (doi:10.1186/s13045-017-0445-8) contains supplementary material, which is available to authorized users.