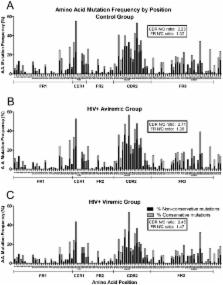 We compared utilization of genes in the most prominent V H family (V H3) and mutation frequencies and patterns of cDNA from V H3-IgG genes from 10 seronegative control subjects and 21 patients with HIV-1 infection (6 without and 15 patients with detectable plasma viremia).

Mutation frequencies in the antigen-binding hypervariable complementarity determining regions (CDR1/2) of IgG class-switched B cells were lower among viremic HIV-1-infected patients vs. controls for nucleotides (CDR1/2: 10±5% vs. 13.5±6%, p = 0.03) and amino acids (CDR: 20%±10 vs. 25%±12, p = 0.02) and in structural framework regions. Mutation patterns were similar among groups. The most common V H3 gene, V H3-23, was utilized less frequently among viremic HIV-1-infected patients (p = 0.03), and overall, mutation frequencies were decreased in nearly all V H3 genes compared with controls.

B cells from HIV-1-infected patients show decreased mutation frequencies, especially in antigen-binding V H3 CDR genes, and selective defects in gene utilization. Similar mutation patterns suggest defects in the quantity, but not quality, of mutator activity. Lower levels of SHM in IgG class-switched B cells from HIV-1-infected patients may contribute to the increased risk of opportunistic infections and impaired humoral responses to preventative vaccines.

A simple method for displaying the hydropathic character of a protein.

B cells in HIV infection and disease.

A Fauci,  Susan Moir (2009)
In recent years, intense research efforts have been dedicated to elucidating the pathogenic mechanisms of HIV-associated disease progression. In addition to the progressive depletion and dysfunction of CD4(+) T cells, HIV infection also leads to extensive defects in the humoral arm of the immune system. The lack of immune control of the virus in almost all infected individuals is a great impediment to the treatment of HIV-associated disease and to the development of a successful HIV vaccine. This Review focuses on advances in our understanding of the mechanisms of B-cell dysfunction in HIV-associated disease and discusses similarities with other diseases that are associated with B-cell dysfunction.

Abnormalities of B-cell activation and immunoregulation in patients with the acquired immunodeficiency syndrome.

A Fauci,  Joanne Edgar,  Robert G. Whalen … (1983)
We studied B-lymphocyte function in 12 homosexual male patients with the acquired immunodeficiency syndrome, 5 healthy homosexual men, and 12 heterosexual controls. In comparison with the heterosexual controls, the patients were found to have elevated numbers of cells spontaneously secreting immunoglobulin, decreased B-cell proliferative responses to T-cell-independent B-cell mitogens, and qualitatively deficient helper T cells. The hyperactive spontaneous B-cell responses as well as the refractoriness to signals for T-cell-independent B-cell activation were highly suggestive of an in vivo polyclonal activation of B cells and may have been responsible for the manifestations of B-cell hyperreactivity, such as hypergammaglobulinemia, seen in these patients. We conclude that the scope of immune dysfunction in the acquired immunodeficiency syndrome involves B cells as well as T cells.

This work has been supported by the Veterans Affairs Research Service and the University of Colorado Denver Mucosal and Vaccine Research Program Colorado (MAVRC) (ENJ) and facilitated by the infrastructure and resources provided by the Colorado Center for AIDS Research Grant (P30 AI054907), the University of Colorado Cancer Center Core Sequencing Facility (P30CA046934), a grant from “Conseil Régional Rhône-Alpes” (Recontres Régionales de la Recherche) (LB) and National Institutes of Health (NIH) grants F32DE005703-01 and RO1A10495752-01 (RWS). The funders had no role in study design, data collection and analysis, decision to publish, or preparation of the manuscript.