Verbal autopsy interpretation: a comparative analysis of the InterVA model versus physician review in determining causes of death in the Nairobi DSS 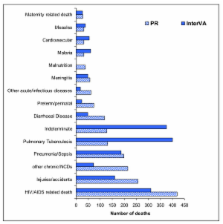 Developing countries generally lack complete vital registration systems that can produce cause of death information for health planning in their populations. As an alternative, verbal autopsy (VA) - the process of interviewing family members or caregivers on the circumstances leading to death - is often used by Demographic Surveillance Systems to generate cause of death data. Physician review (PR) is the most common method of interpreting VA, but this method is a time- and resource-intensive process and is liable to produce inconsistent results. The aim of this paper is to explore how a computer-based probabilistic model, InterVA, performs in comparison with PR in interpreting VA data in the Nairobi Urban Health and Demographic Surveillance System (NUHDSS).

Between August 2002 and December 2008, a total of 1,823 VA interviews were reviewed by physicians in the NUHDSS. Data on these interviews were entered into the InterVA model for interpretation. Cause-specific mortality fractions were then derived from the cause of death data generated by the physicians and by the model. We then estimated the level of agreement between both methods using Kappa statistics.

The level of agreement between individual causes of death assigned by both methods was only 35% (κ = 0.27, 95% CI: 0.25 - 0.30). However, the patterns of mortality as determined by both methods showed a high burden of infectious diseases, including HIV/AIDS, tuberculosis, and pneumonia, in the study population. These mortality patterns are consistent with existing knowledge on the burden of disease in underdeveloped communities in Africa.

The InterVA model showed promising results as a community-level tool for generating cause of death data from VAs. We recommend further refinement to the model, its adaptation to suit local contexts, and its continued validation with more extensive data from different settings.

WHO estimates of the causes of death in children.

Jennifer Bryce,  Cynthia Boschi-Pinto,  Kenji Shibuya … (2005)
Child survival efforts can be effective only if they are based on accurate information about causes of deaths. Here, we report on a 4-year effort by WHO to improve the accuracy of this information. WHO established the external Child Health Epidemiology Reference Group (CHERG) in 2001 to develop estimates of the proportion of deaths in children younger than age 5 years attributable to pneumonia, diarrhoea, malaria, measles, and the major causes of death in the first 28 days of life. Various methods, including single-cause and multi-cause proportionate mortality models, were used. The role of undernutrition as an underlying cause of death was estimated in collaboration with CHERG. In 2000-03, six causes accounted for 73% of the 10.6 million yearly deaths in children younger than age 5 years: pneumonia (19%), diarrhoea (18%), malaria (8%), neonatal pneumonia or sepsis (10%), preterm delivery (10%), and asphyxia at birth (8%). The four communicable disease categories account for more than half (54%) of all child deaths. The greatest communicable disease killers are similar in all WHO regions with the exception of malaria; 94% of global deaths attributable to this disease occur in the Africa region. Undernutrition is an underlying cause of 53% of all deaths in children younger than age 5 years. Achievement of the millennium development goal of reducing child mortality by two-thirds from the 1990 rate will depend on renewed efforts to prevent and control pneumonia, diarrhoea, and undernutrition in all WHO regions, and malaria in the Africa region. In all regions, deaths in the neonatal period, primarily due to preterm delivery, sepsis or pneumonia, and birth asphyxia should also be addressed. These estimates of the causes of child deaths should be used to guide public-health policies and programmes.

A scandal of invisibility: making everyone count by counting everyone.

HIV infection and tuberculosis in South Africa: an urgent need to escalate the public health response.

Salim S Abdool Karim,  Gavin Churchyard,  Quarraisha Karim … (2009)
One of the greatest challenges facing post-apartheid South Africa is the control of the concomitant HIV and tuberculosis epidemics. HIV continues to spread relentlessly, and tuberculosis has been declared a national emergency. In 2007, South Africa, with 0.7% of the world's population, had 17% of the global burden of HIV infection, and one of the world's worst tuberculosis epidemics, compounded by rising drug resistance and HIV co-infection. Until recently, the South African Government's response to these diseases has been marked by denial, lack of political will, and poor implementation of policies and programmes. Nonetheless, there have been notable achievements in disease management, including substantial improvements in access to condoms, expansion of tuberculosis control efforts, and scale-up of free antiretroviral therapy (ART). Care for acutely ill AIDS patients and long-term provision of ART are two issues that dominate medical practice and the health-care system. Decisive action is needed to implement evidence-based priorities for the control of the HIV and tuberculosis epidemics. By use of the framework of the Strategic Plans for South Africa for tuberculosis and HIV/AIDS, we provide prioritised four-step approaches for tuberculosis control, HIV prevention, and HIV treatment. Strong leadership, political will, social mobilisation, adequate human and financial resources, and sustainable development of health-care services are needed for successful implementation of these approaches.