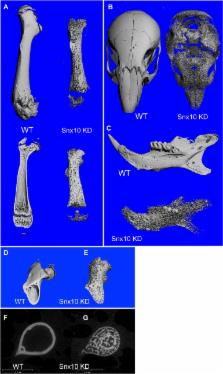 Mutations in sorting nexin 10 (Snx10) have recently been found to account for roughly 4% of all human malignant osteopetrosis, some of them fatal. To study the disease pathogenesis, we investigated the expression of Snx10 and created mouse models in which Snx10 was knocked down globally or knocked out in osteoclasts. Endocytosis is severely defective in Snx10-deficent osteoclasts, as is extracellular acidification, ruffled border formation, and bone resorption. We also discovered that Snx10 is highly expressed in stomach epithelium, with mutations leading to high stomach pH and low calcium solubilization. Global Snx10-deficiency in mice results in a combined phenotype: osteopetrosis (due to osteoclast defect) and rickets (due to high stomach pH and low calcium availability, resulting in impaired bone mineralization). Osteopetrorickets, the paradoxical association of insufficient mineralization in the context of a positive total body calcium balance, is thought to occur due to the inability of the osteoclasts to maintain normal calcium–phosphorus homeostasis. However, osteoclast-specific Snx10 knockout had no effect on calcium balance, and therefore led to severe osteopetrosis without rickets. Moreover, supplementation with calcium gluconate rescued mice from the rachitic phenotype and dramatically extended life span in global Snx10-deficient mice, suggesting that this may be a life-saving component of the clinical approach to Snx10-dependent human osteopetrosis that has previously gone unrecognized. We conclude that tissue-specific effects of Snx10 mutation need to be considered in clinical approaches to this disease entity. Reliance solely on hematopoietic stem cell transplantation can leave hypocalcemia uncorrected with sometimes fatal consequences. These studies established an essential role for Snx10 in bone homeostasis and underscore the importance of gastric acidification in calcium uptake.

We found that Snx10, a molecule expressed in osteoclasts, was also expressed in the stomach. Studies in tissue specific or global knock-down mice showed that Snx10 deficiency resulted in a phenotype that was a consequence of deficiencies in both osteoclasts and gastric zymogenic cells. Our studies add to a growing list of genes, including atp6i ( Tcirg1), whose expression is required both in bone and stomach to maintain normal gastric acidification and calcium absorption. This work provides additional insight into the mechanisms governing the regulation of bone accrual by the gastrointestinal tract. Because osteopetrorickets has not been described clinically in Snx10-related osteopetrosis, these findings highlight the importance of considering impaired acidification in both stomach and bone in osteopetrotic patients with mutations in SNX10 and other genes with similar patterns of expression and activities. Because defects in gastric differentiation and/or gastric acidification may cause or contribute to hypocalcemia, bone insufficiency, and early death, our results suggest that dietary calcium supplementation could be a life-saving intervention in these patients.

Hiroshi Takayanagi,  Katsuhide Igarashi,  Yuuki Imai … (2007)
Estrogen prevents osteoporotic bone loss by attenuating bone resorption; however, the molecular basis for this is unknown. Here, we report a critical role for the osteoclastic estrogen receptor alpha (ERalpha) in mediating estrogen-dependent bone maintenance in female mice. We selectively ablated ERalpha in differentiated osteoclasts (ERalpha(DeltaOc/DeltaOc)) and found that ERalpha(DeltaOc/DeltaOc) females, but not males, exhibited trabecular bone loss, similar to the osteoporotic bone phenotype in postmenopausal women. Further, we show that estrogen induced apoptosis and upregulation of Fas ligand (FasL) expression in osteoclasts of the trabecular bones of WT but not ERalpha(DeltaOc/DeltaOc) mice. The expression of ERalpha was also required for the induction of apoptosis by tamoxifen and estrogen in cultured osteoclasts. Our results support a model in which estrogen regulates the life span of mature osteoclasts via the induction of the Fas/FasL system, thereby providing an explanation for the osteoprotective function of estrogen as well as SERMs.

F Farley,  Alvin Soriano,  L S Steffen … (2015)
As conditional genetic strategies advance, the need for multiple site-specific recombinase systems has emerged. To meet this need in part, we have targeted the constitutive ROSA26 locus to create a mouse strain with generalized expression of the enhanced version of the site-specific recombinase FLP (FLPe). This strain is designated FLPeR ("flipper"). Using this strain, extensive target gene recombination can be achieved in most tissue types, including cells of the developing germ line. FLPeR mice therefore serve two important functions: as a source of many different FLPe-expressing primary cell lines and as a deleter strain. Moreover, because the FLPeR mouse is a 129-derived strain, a 129 genetic background can be preserved when crossed to most ES cell-derived mice. This enables conditional genetic alterations to be maintained on a standard background, a feature important for obtaining reproducible results and genetically defined controls.

Sorting out the cellular functions of sorting nexins.

Carolyn A. Worby,  Nicholas Dixon (2002)
Sorting nexins are a diverse group of cellular trafficking proteins that are unified by the presence of a phospholipid-binding motif - the PX domain. The ability of these proteins to bind specific phospholipids, as well as their propensity to form protein-protein complexes, points to a role for these proteins in membrane trafficking and protein sorting. It will be interesting to determine whether the various sorting nexins have specialized or generalized roles in protein trafficking.

This study was supported by the following grants: Advanced Imaging and Tissue Analysis Core of the Washington University Digestive Diseases Research Core Centers (NIH2P30 DK052574-12) to JCM, NIH R01 DK094989-01 from the National Institute of Diabetes and Digestive and Kidney to JCM, and NIH RO1 AR061504 from the National Institute of Arthritis and Musculoskeletal and Skin Diseases to PRO. The funders had no role in study design, data collection and analysis, decision to publish, or preparation of the manuscript.

Data Availability All relevant data are within the paper and its Supporting Information files.
Data availability:
ScienceOpen disciplines: Genetics