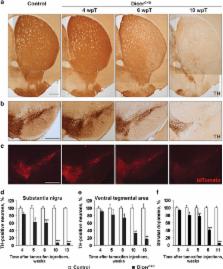 MicroRNAs (miRs) are important post-transcriptional regulators of gene expression implicated in neuronal development, differentiation, aging and neurodegenerative diseases, including Parkinson’s disease (PD). Several miRs have been linked to PD-associated genes, apoptosis and stress response pathways, suggesting that deregulation of miRs may contribute to the development of the neurodegenerative phenotype. Here, we investigate the cell-autonomous role of miR processing RNAse Dicer in the functional maintenance of adult dopamine (DA) neurons. We demonstrate a reduction of Dicer in the ventral midbrain and altered miR expression profiles in laser-microdissected DA neurons of aged mice. Using a mouse line expressing tamoxifen-inducible CreERT2 recombinase under control of the DA transporter promoter, we show that a tissue-specific conditional ablation of Dicer in DA neurons of adult mice led to decreased levels of striatal DA and its metabolites without a reduction in neuronal body numbers in hemizygous mice (Dicer HET) and to progressive loss of DA neurons with severe locomotor deficits in nullizygous mice (Dicer CKO). Moreover, we show that pharmacological stimulation of miR biosynthesis promoted survival of cultured DA neurons and reduced their vulnerability to thapsigargin-induced endoplasmic reticulum stress. Our data demonstrate that Dicer is crucial for maintenance of adult DA neurons, whereas a stimulation of miR production can promote neuronal survival, which may have direct implications for PD treatment.

Elizabeth P. Murchison,  Asa Abeliovich,  Jongpil Kim … (2007)
MicroRNAs (miRNAs) are evolutionarily conserved, 18- to 25-nucleotide, non-protein coding transcripts that posttranscriptionally regulate gene expression during development. miRNAs also occur in postmitotic cells, such as neurons in the mammalian central nervous system, but their function is less well characterized. We investigated the role of miRNAs in mammalian midbrain dopaminergic neurons (DNs). We identified a miRNA, miR-133b, that is specifically expressed in midbrain DNs and is deficient in midbrain tissue from patients with Parkinson's disease. miR-133b regulates the maturation and function of midbrain DNs within a negative feedback circuit that includes the paired-like homeodomain transcription factor Pitx3. We propose a role for this feedback circuit in the fine-tuning of dopaminergic behaviors such as locomotion.

Karine Tréguer,  Joachim R. Ehrlich,  Peter Biliczki … (2013)
Ageing is the predominant risk factor for cardiovascular diseases and contributes to a significantly worse outcome in patients with acute myocardial infarction. MicroRNAs (miRNAs) have emerged as crucial regulators of cardiovascular function and some miRNAs have key roles in ageing. We propose that altered expression of miRNAs in the heart during ageing contributes to the age-dependent decline in cardiac function. Here we show that miR-34a is induced in the ageing heart and that in vivo silencing or genetic deletion of miR-34a reduces age-associated cardiomyocyte cell death. Moreover, miR-34a inhibition reduces cell death and fibrosis following acute myocardial infarction and improves recovery of myocardial function. Mechanistically, we identified PNUTS (also known as PPP1R10) as a novel direct miR-34a target, which reduces telomere shortening, DNA damage responses and cardiomyocyte apoptosis, and improves functional recovery after acute myocardial infarction. Together, these results identify age-induced expression of miR-34a and inhibition of its target PNUTS as a key mechanism that regulates cardiac contractile function during ageing and after acute myocardial infarction, by inducing DNA damage responses and telomere attrition.

Silvia Porta,  Yolanda Espinosa-Parrilla,  Geòrgia Escaramís … (2011)
MicroRNAs (miRNAs) are post-transcriptional gene expression regulators, playing key roles in neuronal development, plasticity and disease. Parkinson's disease (PD) is the second most common neurodegenerative disorder, characterized by the presence of protein inclusions or Lewy bodies and a progressive loss of dopaminergic neurons in the midbrain. Here, we have evaluated miRNA expression deregulation in PD brain samples. MiRNA expression profiling revealed decreased expression of miR-34b and miR-34c in brain areas with variable neuropathological affectation at clinical (motor) stages (Braak stages 4 and 5) of the disease, including the amygdala, frontal cortex, substantia nigra and cerebellum. Furthermore, misregulation of miR-34b/c was detected in pre-motor stages (stages 1-3) of the disease, and thus in cases that did not receive any PD-related treatment during life. Depletion of miR-34b or miR-34c in differentiated SH-SY5Y dopaminergic neuronal cells resulted in a moderate reduction in cell viability that was accompanied by altered mitochondrial function and dynamics, oxidative stress and reduction in total cellular adenosin triphosphate content. MiR-34b/c downregulation was coupled to a decrease in the expression of DJ1 and Parkin, two proteins associated to familial forms of PD that also have a role in idiopathic cases. Accordingly, DJ1 and Parkin expression was reduced in PD brain samples displaying strong miR-34b/c downregulation. We propose that early deregulation of miR-34b/c in PD triggers downstream transcriptome alterations underlying mitochondrial dysfunction and oxidative stress, which ultimately compromise cell viability. A better understanding of the cellular pathways controlling and/or controlled by miR-34b/c should allow identification of targets for development of therapeutic approaches.

Cell Death and Disease is an open-access journal published by Nature Publishing Group. This work is licensed under a Creative Commons Attribution 4.0 International License. The images or other third party material in this article are included in the article’s Creative Commons license, unless indicated otherwise in the credit line; if the material is not included under the Creative Commons license, users will need to obtain permission from the license holder to reproduce the material. To view a copy of this license, visit http://creativecommons.org/licenses/by/4.0/