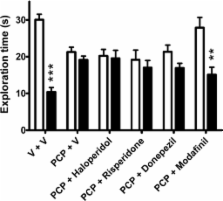 Phencyclidine (PCP) induces a behavioral syndrome in rodents that bears remarkable similarities to some of the core symptoms observed in schizophrenic patients, among those cognitive deficits. The successful alleviation of cognitive impairments associated with schizophrenia (CIAS) has become a major focus of research efforts as they remain largely untreated. The aim of the present study was to investigate the effects of selected antipsychotic and cognition enhancing drugs, namely haloperidol, risperidone, donepezil, and modafinil in an animal model widely used in preclinical schizophrenia research. To this end, the novel object recognition (NOR) task was applied to rats abstinent following sub-chronic treatment with PCP. Rats were administered either PCP (5 mg/kg, i.p.) or vehicle twice a day for 7 days, followed by a 7-day washout period, before testing in NOR. Upon testing, vehicle-treated rats successfully discriminated between novel and familiar objects, an effect abolished in rats that had previously been exposed to PCP treatment. Acute treatment with modafinil (64 mg/kg, p.o.) ameliorated the PCP-induced deficit in novel object exploration, whereas haloperidol (0.1 mg/kg, s.c.), risperidone (0.2 mg/kg, i.p.), and donepezil (3 mg/kg, p.o.) were without significant effect. Given the negligible efficacy of haloperidol and risperidone, and the contradictory data with donepezil to treat CIAS in the clinic, together with the promising preliminary pro-cognitive effects of modafinil in certain subsets of schizophrenic patients, the sub-chronic PCP–NOR abstinence paradigm may represent an attractive option for the identification of potential novel treatments for CIAS.

Jennifer M. Birrell,  Verity J Brown (2000)
If rodents do not display the behavioral complexity that is subserved in primates by prefrontal cortex, then evolution of prefrontal cortex in the rat should be doubted. Primate prefrontal cortex has been shown to mediate shifts in attention between perceptual dimensions of complex stimuli. This study examined the possibility that medial frontal cortex of the rat is involved in the shifting of perceptual attentional set. We trained rats to perform an attentional set-shifting task that is formally the same as a task used in monkeys and humans. Rats were trained to dig in bowls for a food reward. The bowls were presented in pairs, only one of which was baited. The rat had to select the bowl in which to dig by its odor, the medium that filled the bowl, or the texture that covered its surface. In a single session, rats performed a series of discriminations, including reversals, an intradimensional shift, and an extradimensional shift. Bilateral lesions by injection of ibotenic acid in medial frontal cortex resulted in impairment in neither initial acquisition nor reversal learning. We report here the same selective impairment in shifting of attentional set in the rat as seen in primates with lesions of prefrontal cortex. We conclude that medial frontal cortex of the rat has functional similarity to primate lateral prefrontal cortex.

Neurocognitive effects of antipsychotic medications in patients with chronic schizophrenia in the CATIE Trial.

Katherine Gold,  K Hsiao,  Erica E. Davis … (2007)
Neurocognitive impairment in schizophrenia is severe and is an important predictor of functional outcome. The relative effect of the second-generation (atypical) antipsychotic drugs and older agents on neurocognition has not been comprehensively determined. To compare the neurocognitive effects of several second-generation antipsychotics and a first-generation antipsychotic, perphenazine. Randomized, double-blind study of patients with schizophrenia assigned to receive treatment with olanzapine, perphenazine, quetiapine fumarate, or risperidone for up to 18 months as reported previously by Lieberman et al. Ziprasidone hydrochloride was included after its approval by the Food and Drug Administration. Fifty-seven sites participated, including academic sites and treatment mental health facilities representative of the community. From a cohort of 1460 patients in the treatment study, 817 completed neurocognitive testing immediately prior to randomization and then after 2 months of treatment. The primary outcome was change in a neurocognitive composite score after 2 months of treatment. Secondary outcomes included neurocognitive composite score change at 6 months and 18 months after continued treatment and changes in neurocognitive domains. At 2 months, treatment resulted in small neurocognitive improvements of z = 0.13 for olanzapine (P<.002), 0.25 for perphenazine (P<.001), 0.18 for quetiapine (P<.001), 0.26 for risperidone (P<.001), and 0.12 for ziprasidone (P<.06), with no significant differences between groups. Results at 6 months were similar. After 18 months of treatment, neurocognitive improvement was greater in the perphenazine group than in the olanzapine and risperidone groups. Neurocognitive improvement predicted longer time to treatment discontinuation, independently from symptom improvement, in patients treated with quetiapine or ziprasidone. After 2 months of antipsychotic treatment, all groups had a small but significant improvement in neurocognition. There were no differences between any pair of agents, including the typical drug perphenazine. These results differ from the majority of previous studies, and the possible reasons are discussed.

Approaching a consensus cognitive battery for clinical trials in schizophrenia: the NIMH-MATRICS conference to select cognitive domains and test criteria.

Daniel R. Weinberger,  Diane E Stover,  Helena Kraemer … (2004)
To stimulate the development of new drugs for the cognitive deficits of schizophrenia, the National Institute of Mental Health (NIMH) established the Measurement and Treatment Research to Improve Cognition in Schizophrenia (MATRICS) initiative. This article presents an overview of decisions from the first MATRICS consensus conference. The goals of the meeting were to 1) identify the cognitive domains that should be represented in a consensus cognitive battery and 2) prioritize key criteria for selection of tests for the battery. Seven cognitive domains were selected based on a review of the literature and input from experts: working memory, attention/vigilance, verbal learning and memory, visual learning and memory, reasoning and problem solving, speed of processing, and social cognition. Based on discussions at this meeting, five criteria were considered essential for test selection: good test-retest reliability, high utility as a repeated measure, relationship to functional outcome, potential response to pharmacologic agents, and practicality/tolerability. The results from this meeting constitute the initial steps for reaching a consensus cognitive battery for clinical trials in schizophrenia.