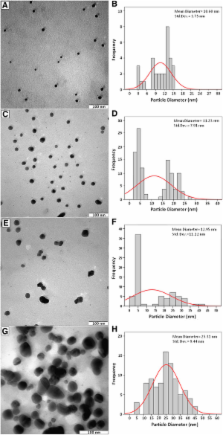 This study aims to investigate the influence of different stirring times on antibacterial activity of silver nanoparticles in polyethylene glycol (PEG) suspension. The silver nanoparticles (Ag-NPs) were prepared by green synthesis method using green agents, polyethylene glycol (PEG) under moderate temperature at different stirring times. Silver nitrate (AgNO 3) was taken as the metal precursor while PEG was used as the solid support and polymeric stabilizer. The antibacterial activity of different sizes of nanosilver was investigated against Gram–positive [ Staphylococcus aureus] and Gram–negative bacteria [ Salmonella typhimurium SL1344] by the disk diffusion method using Müeller–Hinton Agar.

Formation of Ag-NPs was determined by UV–vis spectroscopy where surface plasmon absorption maxima can be observed at 412–437 nm from the UV–vis spectrum. The synthesized nanoparticles were also characterized by X-ray diffraction (XRD). The peaks in the XRD pattern confirmed that the Ag-NPs possessed a face-centered cubic and peaks of contaminated crystalline phases were unable to be located. Transmission electron microscopy (TEM) revealed that Ag-NPs synthesized were in spherical shape. The optimum stirring time to synthesize smallest particle size was 6 hours with mean diameter of 11.23 nm. Zeta potential results indicate that the stability of the Ag-NPs is increases at the 6 h stirring time of reaction. The Fourier transform infrared (FT-IR) spectrum suggested the complexation present between PEG and Ag-NPs. The Ag-NPs in PEG were effective against all bacteria tested. Higher antibacterial activity was observed for Ag-NPs with smaller size. These suggest that Ag-NPs can be employed as an effective bacteria inhibitor and can be applied in medical field.

The study of antimicrobial activity and preservative effects of nanosilver ingredient

N Vigneshwaran,  R Balasubramanya,  P Varadarajan … (2006)
Stable silver nanoparticles have been synthesized by using soluble starch as both the reducing and stabilizing agents; this reaction was carried out in an autoclave at 15 psi, 121 degrees C for 5 min. Nanoparticles thus prepared are found to be stable in aqueous solution over a period of three months at room temperature (approximately 25 degrees C). The size of these nanoparticles was found to be in the range of 10-34 nm as analyzed using transmission electron micrographs. The X-ray diffraction analysis revealed the face-centred cubic (fcc) geometry of silver nanoparticles. Iodometric titration confirmed the entrapment of silver nanoparticles inside the helical amylose chain. These silver nanoparticles embedded in soluble starch produced a typical emission peak at 553 nm when excited at 380 nm. The use of environmentally benign and renewable materials like soluble starch offers numerous benefits of eco-friendliness and compatibility for pharmaceutical and biomedical applications.

Michael F. Rubner,  Daeyeon Lee,  Paula Cohen (2005)
Antibacterial coatings based on hydrogen-bonded multilayers containing in situ synthesized Ag nanoparticles were created on planar surfaces and on magnetic colloidal particles. We report the antibacterial properties of these coatings, determined using a disk-diffusion (Kirby-Bauer) test, as a function of the film thickness and the concentration of Ag nanoparticles in the hydrogen-bonded multilayers. The zone of inhibition (ZoI) determined by the disk-diffusion test increases as the thickness of the multilayer film is increased. Results obtained for the values of the ZoI as a function of film thickness can be described adequately with a simple diffusion model (i.e., the square of the zone of inhibition (ZoI) depended linearly on the logarithm of the thickness of the silver-loaded films). This observation suggests that, in order to incrementally increase the ZoI, an exponentially increasing amount of Ag is required within the multilayers. In general, there was no statistically significant correlation between the zone of inhibition and the number of Ag loading and reduction cycles. The duration of sustained release of antibacterial Ag ions from these coatings, however, could be prolonged by increasing the total supply of zerovalent silver in the films via multiple loading and reduction cycles. These results indicate that the release of silver is controlled by an oxidation mechanism at the surface of the nanoparticles and that repeated loading and reduction of silver leads preferentially to growth of the existing silver nanoparticles in the film as opposed to nucleation of new Ag nanoparticles. We also show that magnetic microspheres coated with silver nanoparticle loaded hydrogen-bonded multilayer thin films can be used to deliver antibacterial agents to specific locations. The minimum inhibitory concentration (MIC) of nanocomposite coated microspheres was determined by the agar dilution technique: antibacterial magnetic microspheres with higher concentrations of Ag nanoparticles exhibited lower MIC values.