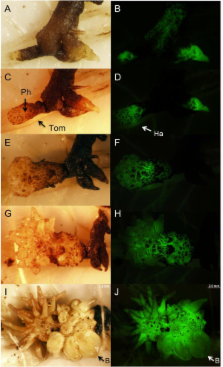 Transformation and subsequent regeneration of holoparasitic plants has never been reported, in part due to challenges in developing transformation protocols, but also because regeneration of obligate parasites is difficult since their survival depends completely on successful haustorium penetration of a host and the formation of vascular connections. The recent completion of a massive transcriptome sequencing project (the Parasitic Plant Genome Project) will fuel the use of genomic tools for studies on parasitic plants. A reliable system for holoparasite transformation is needed to realize the full value of this resource for reverse genetics and functional genomics studies.

Here we demonstrate that transformation of Phelipanche aegyptiaca is achieved by infection of 3 month-old in vitro grown P. aegyptiaca calli with Agrobacterium rhizogenes harboring the yellow fluorescent protein (YFP). Four months later, YFP-positive regenerated calli were inoculated onto tomato plants growing in a minirhizotron system. Eight days after inoculation, transgenic parasite tissue formed lateral haustoria that penetrated the host and could be visualized under UV illumination through intact host root tissue. YFP-positive shoot buds were observed one month after inoculation.

Kaori Yoneyama, Koichi Yoneyama, Xiaonan Xie (2009)
Strigolactones (SLs) were originally isolated from plant root exudates as germination stimulants for root parasitic plants of the family Orobanchaceae, including witchweeds (Striga spp.), broomrapes (Orobanche and Phelipanche spp.), and Alectra spp., and so were regarded as detrimental to the producing plants. Their role as indispensable chemical signals for root colonization by symbiotic arbuscular mycorrhizal fungi was subsequently unveiled, and SLs then became recognized as beneficial plant metabolites. In addition to these functions in the rhizosphere, it has been recently shown that SLs or their metabolites are a novel class of plant hormones that inhibit shoot branching. Furthermore, SLs are suggested to have other biological functions in rhizosphere communications and in plant growth and development.

The evolution of parasitism in plants.

James H Westwood, John Yoder, Michael Timko … (2010)
The multiple independent origins of plant parasitism suggest that numerous ancestral plant lineages possessed the developmental flexibility to meet the requirements of a parasitic life style, including such adaptations as the ability to recognize host plants, form an invasive haustorium, and regulate the transfer of nutrients and other molecules between two different plants. In this review, we focus on the Orobanchaceae, which are unique among the parasitic plants in that extant member species include the full range of host dependence from facultative to obligate parasites. The recent emergence of genomic resources for these plants should provide new insights into parasitic plant evolution and enable the development of novel genetic strategies for controlling parasitic weeds.

John Yoder, Julie Scholes (2010)
Parasitic witchweeds (Striga spp.) and broomrapes (Orobanche and Phelipanche spp.) directly invade the roots of crop plants connecting to the vascular system and abstracting nutrients and water. As a consequence they cause devastating losses in crop yield. Genetic resistance to parasitic weeds is a highly desirable component of any control strategy. Resistance to parasitic plants can occur at different stages of the parasite lifecycle: before attachment to the host, during penetration of the root or after establishment of vascular connections. New studies are beginning to shed light on the molecular mechanisms and signaling pathways involved in plant-plant resistance. The first resistance gene to Striga, encoding a CC-NBS-LRR Resistance protein (R) has been identified and cloned suggesting that host plants resist attack from parasitic plants using similar surveillance mechanisms as those used against fungal and bacterial pathogens. It is becoming clear that the salicylic acid (SA) signaling pathway plays an important role in resistance to parasitic plants and genes encoding pathogenesis-related (PR) proteins are upregulated in a number of the resistant interactions. New strategies for engineering resistance to parasitic plants are also being explored, including the expression of parasite-specific toxins in host roots and RNAi to silence parasite genes crucial for development. Copyright 2010 Elsevier Ltd. All rights reserved.