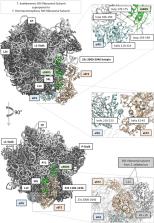 The translation factor IF6 is a protein of about 25 kDa shared by the Archaea and the Eukarya but absent in Bacteria. It acts as a ribosome anti-association factor that binds to the large subunit preventing the joining to the small subunit. It must be released from the large ribosomal subunit to permit its entry to the translation cycle. In Eukarya, this process occurs by the coordinated action of the GTPase Efl1 and the docking protein SBDS. Archaea do not possess a homolog of the former factor while they have a homolog of SBDS. In the past, we have determined the function and ribosomal localization of the archaeal ( Sulfolobus solfataricus) IF6 homolog (aIF6) highlighting its similarity to the eukaryotic counterpart. Here, we analyzed the mechanism of aIF6 release from the large ribosomal subunit. We found that, similarly to the Eukarya, the detachment of aIF6 from the 50S subunit requires a GTPase activity which involves the archaeal elongation factor 2 (aEF-2). However, the release of aIF6 from the 50S subunits does not require the archaeal homolog of SBDS, being on the contrary inhibited by its presence. Molecular modeling, using published structural data of closely related homologous proteins, elucidated the mechanistic interplay between the aIF6, aSBDS, and aEF2 on the ribosome surface. The results suggest that a conformational rearrangement of aEF2, upon GTP hydrolysis, promotes aIF6 ejection. On the other hand, aSBDS and aEF2 share the same binding site, whose occupation by SBDS prevents aEF2 binding, thereby inhibiting aIF6 release.

Philip E. Bourne,  P Bourne,  Ilya Shindyalov (1998)
A new algorithm is reported which builds an alignment between two protein structures. The algorithm involves a combinatorial extension (CE) of an alignment path defined by aligned fragment pairs (AFPs) rather than the more conventional techniques using dynamic programming and Monte Carlo optimization. AFPs, as the name suggests, are pairs of fragments, one from each protein, which confer structure similarity. AFPs are based on local geometry, rather than global features such as orientation of secondary structures and overall topology. Combinations of AFPs that represent possible continuous alignment paths are selectively extended or discarded thereby leading to a single optimal alignment. The algorithm is fast and accurate in finding an optimal structure alignment and hence suitable for database scanning and detailed analysis of large protein families. The method has been tested and compared with results from Dali and VAST using a representative sample of similar structures. Several new structural similarities not detected by these other methods are reported. Specific one-on-one alignments and searches against all structures as found in the Protein Data Bank (PDB) can be performed via the Web at http://cl.sdsc.edu/ce.html.

A. Sali,  T L Blundell (1993)
We describe a comparative protein modelling method designed to find the most probable structure for a sequence given its alignment with related structures. The three-dimensional (3D) model is obtained by optimally satisfying spatial restraints derived from the alignment and expressed as probability density functions (pdfs) for the features restrained. For example, the probabilities for main-chain conformations of a modelled residue may be restrained by its residue type, main-chain conformation of an equivalent residue in a related protein, and the local similarity between the two sequences. Several such pdfs are obtained from the correlations between structural features in 17 families of homologous proteins which have been aligned on the basis of their 3D structures. The pdfs restrain C alpha-C alpha distances, main-chain N-O distances, main-chain and side-chain dihedral angles. A smoothing procedure is used in the derivation of these relationships to minimize the problem of a sparse database. The 3D model of a protein is obtained by optimization of the molecular pdf such that the model violates the input restraints as little as possible. The molecular pdf is derived as a combination of pdfs restraining individual spatial features of the whole molecule. The optimization procedure is a variable target function method that applies the conjugate gradients algorithm to positions of all non-hydrogen atoms. The method is automated and is illustrated by the modelling of trypsin from two other serine proteinases.

ProSA-web: interactive web service for the recognition of errors in three-dimensional structures of proteins

Markus Wiederstein,  Manfred Sippl (2007)
A major problem in structural biology is the recognition of errors in experimental and theoretical models of protein structures. The ProSA program (Protein Structure Analysis) is an established tool which has a large user base and is frequently employed in the refinement and validation of experimental protein structures and in structure prediction and modeling. The analysis of protein structures is generally a difficult and cumbersome exercise. The new service presented here is a straightforward and easy to use extension of the classic ProSA program which exploits the advantages of interactive web-based applications for the display of scores and energy plots that highlight potential problems spotted in protein structures. In particular, the quality scores of a protein are displayed in the context of all known protein structures and problematic parts of a structure are shown and highlighted in a 3D molecule viewer. The service specifically addresses the needs encountered in the validation of protein structures obtained from X-ray analysis, NMR spectroscopy and theoretical calculations. ProSA-web is accessible at https://prosa.services.came.sbg.ac.at

This article was submitted to Biology of Archaea, a section of the journal Frontiers in Microbiology