Carbohydrate Nutrition and the Risk of Cancer 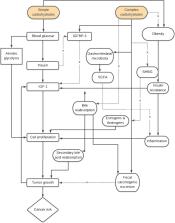 This review summarizes a selection of epidemiologic research assessing the associations between carbohydrate intake and cancer incidence and survival. Evidence for plausible biological mechanisms is also considered.

The mechanistic paradigm explaining the relationship between carbohydrates and cancer risk has been contested by numerous observational studies.

Carbohydrates have conventionally been ascribed a deleterious role in the field of cancer research due to previous preclinical findings. A breadth of studies suggests that complex carbohydrate intake is inversely associated with risk of a number of cancer types. Data from studies assessing simple carbohydrates and cancer risk are mixed. Furthermore, recommendations for subsequent studies are framed.

Gregg L. Semenza (1998)
Hypoxia-inducible factor 1 (HIF-1) is a transcription factor that mediates essential homeostatic responses to reduced O2 availability in mammals. Recent studies have provided insights into the O2-dependent regulation of HIF-1 expression, target genes regulated by HIF-1, and the effects of HIF-1 deficiency on cellular physiology and embryonic development.

Is Akt the "Warburg kinase"?-Akt-energy metabolism interactions and oncogenesis.

R. Brooks Robey,  Nissim Hay (2009)
The serine/threonine kinase Akt - also known as protein kinase B (PKB) - has emerged as one of the most frequently activated protein kinases in human cancer. In fact, most, if not all, tumors ultimately find a way to activate this important kinase. As such, Akt activation constitutes a hallmark of most cancer cells, and such ubiquity presumably connotes important roles in tumor genesis and/or progression. Likewise, the hypermetabolic nature of cancer cells and their increased reliance on "aerobic glycolysis", as originally described by Otto Warburg and colleagues, are considered metabolic hallmarks of cancer cells. In this review, we address the specific contributions of Akt activation to the signature metabolic features of cancer cells, including the so-called "Warburg effect".

Open Access This article is distributed under the terms of the Creative Commons Attribution 4.0 International License ( http://creativecommons.org/licenses/by/4.0/), which permits unrestricted use, distribution, and reproduction in any medium, provided you give appropriate credit to the original author(s) and the source, provide a link to the Creative Commons license, and indicate if changes were made.