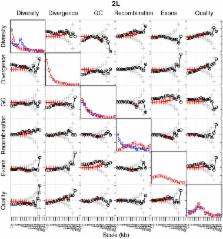 Estimating fine-scale recombination maps of Drosophila from population genomic data is a challenging problem, in particular because of the high background recombination rate. In this paper, a new computational method is developed to address this challenge. Through an extensive simulation study, it is demonstrated that the method allows more accurate inference, and exhibits greater robustness to the effects of natural selection and noise, compared to a well-used previous method developed for studying fine-scale recombination rate variation in the human genome. As an application, a genome-wide analysis of genetic variation data is performed for two Drosophila melanogaster populations, one from North America (Raleigh, USA) and the other from Africa (Gikongoro, Rwanda). It is shown that fine-scale recombination rate variation is widespread throughout the D. melanogaster genome, across all chromosomes and in both populations. At the fine-scale, a conservative, systematic search for evidence of recombination hotspots suggests the existence of a handful of putative hotspots each with at least a tenfold increase in intensity over the background rate. A wavelet analysis is carried out to compare the estimated recombination maps in the two populations and to quantify the extent to which recombination rates are conserved. In general, similarity is observed at very broad scales, but substantial differences are seen at fine scales. The average recombination rate of the X chromosome appears to be higher than that of the autosomes in both populations, and this pattern is much more pronounced in the African population than the North American population. The correlation between various genomic features—including recombination rates, diversity, divergence, GC content, gene content, and sequence quality—is examined using the wavelet analysis, and it is shown that the most notable difference between D. melanogaster and humans is in the correlation between recombination and diversity.

The fine-scale structure of recombination rate variation in the human genome.

Panos Deloukas,  Peter Donnelly,  Stephen Bentley … (2004)
The nature and scale of recombination rate variation are largely unknown for most species. In humans, pedigree analysis has documented variation at the chromosomal level, and sperm studies have identified specific hotspots in which crossing-over events cluster. To address whether this picture is representative of the genome as a whole, we have developed and validated a method for estimating recombination rates from patterns of genetic variation. From extensive single-nucleotide polymorphism surveys in European and African populations, we find evidence for extreme local rate variation spanning four orders in magnitude, in which 50% of all recombination events take place in less than 10% of the sequence. We demonstrate that recombination hotspots are a ubiquitous feature of the human genome, occurring on average every 200 kilobases or less, but recombination occurs preferentially outside genes.

Augustine Kong,  Gudmar Thorleifsson,  Aslaug Jonasdottir … (2010)
Meiotic recombinations contribute to genetic diversity by yielding new combinations of alleles. Recently, high-resolution recombination maps were inferred from high-density single-nucleotide polymorphism (SNP) data using linkage disequilibrium (LD) patterns that capture historical recombination events. The use of these maps has been demonstrated by the identification of recombination hotspots and associated motifs, and the discovery that the PRDM9 gene affects the proportion of recombinations occurring at hotspots. However, these maps provide no information about individual or sex differences. Moreover, locus-specific demographic factors like natural selection can bias LD-based estimates of recombination rate. Existing genetic maps based on family data avoid these shortcomings, but their resolution is limited by relatively few meioses and a low density of markers. Here we used genome-wide SNP data from 15,257 parent-offspring pairs to construct the first recombination maps based on directly observed recombinations with a resolution that is effective down to 10 kilobases (kb). Comparing male and female maps reveals that about 15% of hotspots in one sex are specific to that sex. Although male recombinations result in more shuffling of exons within genes, female recombinations generate more new combinations of nearby genes. We discover novel associations between recombination characteristics of individuals and variants in the PRDM9 gene and we identify new recombination hotspots. Comparisons of our maps with two LD-based maps inferred from data of HapMap populations of Utah residents with ancestry from northern and western Europe (CEU) and Yoruba in Ibadan, Nigeria (YRI) reveal population differences previously masked by noise and map differences at regions previously described as targets of natural selection.