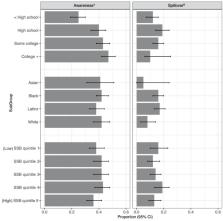 Despite a growing body of evidence showing that sugar-sweetened beverage (SSB) taxes nudge consumers away from SSBs, we lack an understanding of people’s awareness and perceptions of SSB taxes and whether tax awareness and perceptions differ based on sociodemographic characteristics. We used serial cross-sectional study intercept surveys ( n = 2715) in demographically diverse neighborhoods of Berkeley and Oakland in 2015 and 2017, and San Francisco and Richmond in 2017. In the year following successful SSB tax ballot measures, 45% of respondents correctly recalled that an SSB tax had passed in their city. In untaxed cities, 14% of respondents incorrectly thought that a tax had passed. Perceived benefits of SSB taxes to the community and to children’s health were moderate and, like correct recall of an SSB tax, were higher among respondents with higher education levels. Awareness of SSB taxes was low overall, and perceptions about taxes’ benefits varied by educational attainment, reflecting a missed opportunity to educate citizens about how SSB taxes work and their importance. Public health efforts should invest in campaigns that explain the benefits of SSB taxes and provide information about how tax revenues will be invested, both before and after a tax proposal has passed.

Changes in prices, sales, consumer spending, and beverage consumption one year after a tax on sugar-sweetened beverages in Berkeley, California, US: A before-and-after study

Lynn D. Silver, Shu Ng, Suzanne Ryan-Ibarra … (2017)
Background Taxes on sugar-sweetened beverages (SSBs) meant to improve health and raise revenue are being adopted, yet evaluation is scarce. This study examines the association of the first penny per ounce SSB excise tax in the United States, in Berkeley, California, with beverage prices, sales, store revenue/consumer spending, and usual beverage intake. Methods and findings Methods included comparison of pre-taxation (before 1 January 2015) and first-year post-taxation (1 March 2015–29 February 2016) measures of (1) beverage prices at 26 Berkeley stores; (2) point-of-sale scanner data on 15.5 million checkouts for beverage prices, sales, and store revenue for two supermarket chains covering three Berkeley and six control non-Berkeley large supermarkets in adjacent cities; and (3) a representative telephone survey (17.4% cooperation rate) of 957 adult Berkeley residents. Key hypotheses were that (1) the tax would be passed through to the prices of taxed beverages among the chain stores in which Berkeley implemented the tax in 2015; (2) sales of taxed beverages would decline, and sales of untaxed beverages would rise, in Berkeley stores more than in comparison non-Berkeley stores; (3) consumer spending per transaction (checkout episode) would not increase in Berkeley stores; and (4) self-reported consumption of taxed beverages would decline. Main outcomes and measures included changes in inflation-adjusted prices (cents/ounce), beverage sales (ounces), consumers’ spending measured as store revenue (inflation-adjusted dollars per transaction) in two large chains, and usual beverage intake (grams/day and kilocalories/day). Tax pass-through (changes in the price after imposition of the tax) for SSBs varied in degree and timing by store type and beverage type. Pass-through was complete in large chain supermarkets (+1.07¢/oz, p = 0.001) and small chain supermarkets and chain gas stations (1.31¢/oz, p = 0.004), partial in pharmacies (+0.45¢/oz, p = 0.03), and negative in independent corner stores and independent gas stations (−0.64¢/oz, p = 0.004). Sales-unweighted mean price change from scanner data was +0.67¢/oz (p = 0.00) (sales-weighted, +0.65¢/oz, p = 0.003), with +1.09¢/oz (p < 0.001) for sodas and energy drinks, but a lower change in other categories. Post-tax year 1 scanner data SSB sales (ounces/transaction) in Berkeley stores declined 9.6% (p < 0.001) compared to estimates if the tax were not in place, but rose 6.9% (p < 0.001) for non-Berkeley stores. Sales of untaxed beverages in Berkeley stores rose by 3.5% versus 0.5% (both p < 0.001) for non-Berkeley stores. Overall beverage sales also rose across stores. In Berkeley, sales of water rose by 15.6% (p < 0.001) (exceeding the decline in SSB sales in ounces); untaxed fruit, vegetable, and tea drinks, by 4.37% (p < 0.001); and plain milk, by 0.63% (p = 0.01). Scanner data mean store revenue/consumer spending (dollars per transaction) fell 18¢ less in Berkeley (−$0.36, p < 0.001) than in comparison stores (−$0.54, p < 0.001). Baseline and post-tax Berkeley SSB sales and usual dietary intake were markedly low compared to national levels (at baseline, National Health and Nutrition Examination Survey SSB intake nationally was 131 kcal/d and in Berkeley was 45 kcal/d). Reductions in self-reported mean daily SSB intake in grams (−19.8%, p = 0.49) and in mean per capita SSB caloric intake (−13.3%, p = 0.56) from baseline to post-tax were not statistically significant. Limitations of the study include inability to establish causal links due to observational design, and the absence of health outcomes. Analysis of consumption was limited by the small effect size in relation to high standard error and Berkeley’s low baseline consumption. Conclusions One year following implementation of the nation’s first large SSB tax, prices of SSBs increased in many, but not all, settings, SSB sales declined, and sales of untaxed beverages (especially water) and overall study beverages rose in Berkeley; overall consumer spending per transaction in the stores studied did not rise. Price increases for SSBs in two distinct data sources, their timing, and the patterns of change in taxed and untaxed beverage sales suggest that the observed changes may be attributable to the tax. Post-tax self-reported SSB intake did not change significantly compared to baseline. Significant declines in SSB sales, even in this relatively affluent community, accompanied by revenue used for prevention suggest promise for this policy. Evaluation of taxation in jurisdictions with more typical SSB consumption, with controls, is needed to assess broader dietary and potential health impacts.

Rachel K Johnson, Lawrence Appel, Michael Brands … (2009)
High intakes of dietary sugars in the setting of a worldwide pandemic of obesity and cardiovascular disease have heightened concerns about the adverse effects of excessive consumption of sugars. In 2001 to 2004, the usual intake of added sugars for Americans was 22.2 teaspoons per day (355 calories per day). Between 1970 and 2005, average annual availability of sugars/added sugars increased by 19%, which added 76 calories to Americans' average daily energy intake. Soft drinks and other sugar-sweetened beverages are the primary source of added sugars in Americans' diets. Excessive consumption of sugars has been linked with several metabolic abnormalities and adverse health conditions, as well as shortfalls of essential nutrients. Although trial data are limited, evidence from observational studies indicates that a higher intake of soft drinks is associated with greater energy intake, higher body weight, and lower intake of essential nutrients. National survey data also indicate that excessive consumption of added sugars is contributing to overconsumption of discretionary calories by Americans. On the basis of the 2005 US Dietary Guidelines, intake of added sugars greatly exceeds discretionary calorie allowances, regardless of energy needs. In view of these considerations, the American Heart Association recommends reductions in the intake of added sugars. A prudent upper limit of intake is half of the discretionary calorie allowance, which for most American women is no more than 100 calories per day and for most American men is no more than 150 calories per day from added sugars.