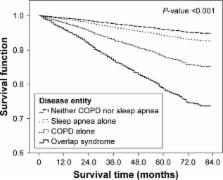 The aim of this study was to investigate the role of obstructive sleep apnea (OSA) on all-cause mortality in patients with COPD.

Data for this cross-sectional study were obtained from the National Health and Nutrition Examination Survey (NHANES) data (year 2005–2008). Eligible subjects were ≥20 years who had no COPD or OSA (n=9,237), had only OSA (n=366), had only COPD (n=695), and had OSA/COPD overlap syndrome (n=90). Univariate and multivariate analyses were used to evaluate factors associated with overall mortality.

Multivariate analysis found that the COPD and OSA/COPD overlap syndrome groups had significantly higher chance of all-cause mortality than the group of subjects who did not have OSA or COPD (adjusted hazard ratio [HR] =1.5 for the COPD group and 2.4 for the overlap syndrome group) ( P≤0.007). Although not significant, having OSA/COPD overlap syndrome was associated with higher likelihood of death than COPD alone (HR =1.5; P=0.160). Other factors associated with higher overall mortality were aging, poorer family status, current smoker, serum vitamin D deficiency, cardiovascular disease, history of cancer, diabetes, and impaired renal function.

The present study found that COPD and OSA/COPD overlap syndrome were associated with higher all-cause mortality compared with patients without either disease and that OSA did not significantly increase mortality in patients with COPD.

Mortality in COPD: Role of comorbidities.

J Soriano,  Don Sin,  N R Anthonisen … (2006)
Chronic obstructive pulmonary disease (COPD) represents an increasing burden throughout the world. COPD-related mortality is probably underestimated because of the difficulties associated with identifying the precise cause of death. Respiratory failure is considered the major cause of death in advanced COPD. Comorbidities such as cardiovascular disease and lung cancer are also major causes and, in mild-to-moderate COPD, are the leading causes of mortality. The links between COPD and these conditions are not fully understood. However, a link through the inflammation pathway has been suggested, as persistent low-grade pulmonary and systemic inflammation, both known risk factors for cardiovascular disease and cancer, are present in COPD independent of cigarette smoking. Lung-specific measurements, such as forced expiratory volume in one second (FEV(1)), predict mortality in COPD and in the general population. However, composite tools, such as health-status measurements (e.g. St George's Respiratory Questionnaire) and the BODE index, which incorporates Body mass index, lung function (airflow Obstruction), Dyspnoea and Exercise capacity, predict mortality better than FEV(1) alone. These multidimensional tools may be more valuable because, unlike predictive approaches based on single parameters, they can reflect the range of comorbidities and the complexity of underlying mechanisms associated with COPD. The current paper reviews the role of comorbidities in chronic obstructive pulmonary disease mortality, the putative underlying pathogenic link between chronic obstructive pulmonary disease and comorbid conditions (i.e. inflammation), and the tools used to predict chronic obstructive pulmonary disease mortality.

Systemic effects of chronic obstructive pulmonary disease: what we know and what we don't know (but should).

Àlvar Agustí (2007)
Chronic obstructive pulmonary disease (COPD) is associated with pulmonary and systemic inflammation. The latter is likely to contribute significantly to the pathobiology of numerous extrapulmonary effects of the disease--the so-called systemic effects of COPD. The clinical relevance of these systemic effects has been recently recognized; however, many important questions about its pathophysiology remain unanswered. This article reviews what is known about it and, more importantly, highlights what is not (but should be) known in order to stimulate research in this area, in the hope that a better understanding of this field may lead to better treatment options for patients with COPD.