The efficacy and safety of S-flurbiprofen plaster in the treatment of knee osteoarthritis: a phase II, randomized, double-blind, placebo-controlled, dose-finding study 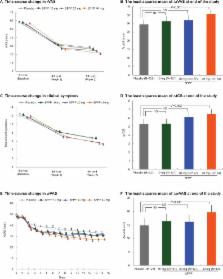 Nonsteroidal anti-inflammatory drug (NSAID) patches are convenient for use and show much less gastrointestinal side effects than oral NSAIDs, whereas its percutaneous absorption is not sufficient for the expression of clinical efficacy at satisfactory level. S-flurbiprofen plaster (SFPP) has shown dramatic improvement in percutaneous absorption results from animal and clinical studies. In this study, the efficacy and safety of SFPP were compared with placebo in patients with knee osteoarthritis (OA) to determine its optimal dose. This was a multicenter, randomized, double-blind, parallel-group comparative study.

Enrolled 509 knee OA patients were treated with placebo or SFPP at 10, 20, or 40 mg applied on the affected site once daily for 2 weeks. The primary endpoint for efficacy was improvement in knee pain on rising from the chair assessed by visual analog scale (VAS). The other endpoints were clinical symptoms, pain on walking, and global assessment by both investigator and patient. Safety was evaluated by observing adverse events (AEs).

VAS change in knee pain from baseline to trial end was dose-dependent, least squares mean was 29.5, 31.5, 32.0, and 35.6 mm in placebo and SFPP 10, 20, and 40 mg, respectively. A significant difference was observed between placebo and SFPP 40 mg ( P=0.001). In contrast, the effect of SFPP at a dose ≤20 mg was not significantly different from that of placebo. The proportion of the patients who achieved 50% pain relief was 72.4% in 40 mg and 51.2% in placebo ( P<0.001). In all other endpoints, SFPP 40 mg showed significant improvement compared with placebo. The incidence of AEs was not different across all four groups, and no severe AEs were observed.

Clinically relevant pain relief was observed in all groups including placebo. Especially 40 mg showed remarkable pain relief in not only primary endpoint but also all the other endpoint with significant differences over placebo. The safety profile of SFPP 40 mg was not different from that of placebo. Therefore, 40 mg was determined as the optimal tested dose.

Knee pain and osteoarthritis in older adults: a review of community burden and current use of primary health care.

Quentin P. Croft,  G. Peat,  Evan R McCarney (2001)
Osteoarthritis is the single most common cause of disability in older adults, and most patients with the condition will be managed in the community and primary care. To discuss case definition of knee osteoarthritis for primary care and to summarise the burden of the condition in the community and related use of primary health care in the United Kingdom. Narrative review. A literature search identified studies of incidence and prevalence of knee pain, disability, and radiographic osteoarthritis in the general population, and data related to primary care consultations. Findings from UK studies were summarised with reference to European and international studies. During a one year period 25% of people over 55 years have a persistent episode of knee pain, of whom about one in six in the UK and the Netherlands consult their general practitioner about it in the same time period. The prevalence of painful disabling knee osteoarthritis in people over 55 years is 10%, of whom one quarter are severely disabled. Knee osteoarthritis sufficiently severe to consider joint replacement represents a minority of all knee pain and disability suffered by older people. Healthcare provision in primary care needs to focus on this broader group to impact on community levels of pain and disability.