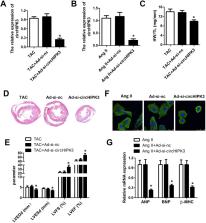 Cardiac hypertrophy is induced by diverse patho-physiological stimuli and indicates an increase in cardiomyocyte size. Circular RNAs (circRNAs) and microRNAs (miRNAs), members of noncoding RNAs, are involved in several biological processes and cardiovascular diseases (CVD). Here, we investigated the potential role of circHIPK3, which is produced by the third exon of the HIPK3 gene in cardiac hypertrophy.

qRT-PCR and Sanger sequencing were conducted to identify the expression and characteristics (head-to-tail structure, stability, and location) of circHIPK3 in cardiac hypertrophy; Immunostaining of α-SMA was performed to evaluate the size of the cardiomyocytes; Transverse aortic constriction (TAC) induced hypertrophy models of mice were established to investigate the effect of circHIPK3 in vivo. Bioinformatics analysis and luciferase reporter assays, RNA immunoprecipitation, and fluorescence in situ hybridization (FISH) experiments were conducted to investigate the mechanism of circHIPK3-mediated cardiac hypertrophy.

Circular RNAs are a large class of animal RNAs with regulatory potency.

Qiupeng Zheng,  Chunyang Bao,  Weijie Guo … (2016)
Circular RNAs (circRNAs) represent a class of widespread and diverse endogenous RNAs that may regulate gene expression in eukaryotes. However, the regulation and function of human circRNAs remain largely unknown. Here we generate ribosomal-depleted RNA sequencing data from six normal tissues and seven cancers, and detect at least 27,000 circRNA candidates. Many of these circRNAs are differently expressed between the normal and cancerous tissues. We further characterize one abundant circRNA derived from Exon2 of the HIPK3 gene, termed circHIPK3. The silencing of circHIPK3 but not HIPK3 mRNA significantly inhibits human cell growth. Via a luciferase screening assay, circHIPK3 is observed to sponge to 9 miRNAs with 18 potential binding sites. Specifically, we show that circHIPK3 directly binds to miR-124 and inhibits miR-124 activity. Our results provide evidence that circular RNA produced from precursor mRNA may have a regulatory role in human cells.

Li-Yang Chiang,  Ling Chen (2014)
Unlike linear RNAs terminated with 5' caps and 3' tails, circular RNAs are characterized by covalently closed loop structures with neither 5' to 3' polarity nor polyadenylated tail. This intrinsic characteristic has led to the general under-estimation of the existence of circular RNAs in previous polyadenylated transcriptome analyses. With the advent of specific biochemical and computational approaches, a large number of circular RNAs from back-spliced exons (circRNAs) have been identified in various cell lines and across different species. Recent studies have uncovered that back-splicing requires canonical spliceosomal machinery and can be facilitated by both complementary sequences and specific protein factors. In this review, we highlight our current understanding of the regulation of circRNA biogenesis, including both the competition between splicing and back-splicing and the previously under-appreciated alternative circularization.