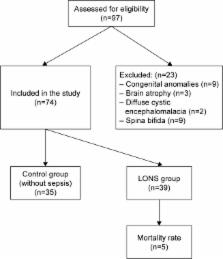 Preterm newborns, due to many factors, are at increased risk for poor neural development, intraventricular hemorrhages, infections, and higher rate of mortality. The aim of this study was to evaluate the risk factors associated with poor outcome in preterm neonates with late-onset neonatal sepsis (LONS) who had posthemorrhagic hydrocephalus and underwent neurosurgical procedures for treatment of the hydrocephalus.

Preterm neonates who had undergone insertion of ventriculoperitoneal shunt or Ommaya reservoir, during the 10-year period at University Children’s Hospital, were retrospectively analyzed. According to the presence or absence of LONS, patients were divided into LONS group and non-LONS group. In both groups, we analyzed demographic and clinical data as well as nondependent factors. Additionally, we evaluated the patients who had lethal outcome in respect to all the analyzed factors.

A total of 74 patients were included in the study, 35 in LONS group and 39 in control group. Patients in LONS group were born significantly earlier with lower birth weight, needed significantly higher O 2 inspiratory concentration, and had longer duration of mechanical ventilation when compared to the nonseptic group. Five patients in LONS group had lethal outcome, and for these patients we identified a grade American Society of Anaesthesiologists score of 4 ( P=0.000), ductus arteriosus persistens ( P=0.000), bronchopulmonary dysplasia ( P=0.003), and pneumothorax ( P=0.003) as independent preoperative risk factors for lethal outcome.

Neurosurgical procedures are relatively safe in neonates with posthemorrhagic hydrocephalus without LONS after birth. However, if LONS is present, various conditions such as preoperative high grade American Society of Anaesthesiologists score, ductus arteriosus persistens, bronchopulmonary dysplasia, and pneumothorax markedly increase the risk for a lethal outcome after the operation.

Praveen Ballabh (2009)
Intraventricular hemorrhage (IVH) is a major complication of prematurity. IVH typically initiates in the germinal matrix, which is a richly vascularized collection of neuronal-glial precursor cells in the developing brain. The etiology of IVH is multifactorial and is primarily attributed to the intrinsic fragility of the germinal matrix vasculature and the disturbance in the cerebral blood flow (CBF). Although this review broadly describes the pathogenesis of IVH, the main focus is on the recent development in molecular mechanisms that elucidates the fragility of the germinal matrix vasculature. The microvasculature of the germinal matrix is frail because of an abundance of angiogenic blood vessels that exhibit paucity of pericytes, immaturity of basal lamina, and deficiency of glial fibrillary acidic protein (GFAP) in the ensheathing astrocytes endfeet. High VEGF and angiopoietin-2 levels activate a rapid angiogenesis in the germinal matrix. The elevation of these growth factors may be ascribed to a relative hypoxia of the germinal matrix perhaps resulting from high metabolic activity and oxygen consumption of the neural progenitor cells. Hence, the rapid stabilization of the angiogenic vessels and the restoration of normal CBF on the first day of life are potential strategies to prevent IVH in premature infants.

A Laptook,  James Walsh,  B Stoll … (2013)
To describe and compare the incidence of late-onset sepsis (LOS) and demographic and clinical characteristics associated with LOS in very low birth weight (VLBW) infants from singleton and multiple births, and to examine the heritability of susceptibility to LOS among VLBW twins by comparing same-sex and unlike-sex twin pairs. The study group comprised infants with birth weight 401-1500 g seen at clinical centers of the Eunice Kennedy Shriver National Institute of Child and Human Development Neonatal Research Network between 2002 and 2008. Only the first episode of LOS was included in our analysis. Stepwise logistic regression models were fitted separately for singleton and multiple pregnancies to examine the maternal and neonatal factors associated with LOS. LOS due solely to gram-negative bacteria in singleton and multiple pregnancies was also examined in separate models. The heritability of LOS was estimated by examining the concordance of LOS in twins from same-sex and unlike-sex pairs. LOS occurred in 25.0% (3797 of 15,178) of singleton and 22.6% (1196 of 5294) of multiple-birth VLBW infants. Coagulase-negative staphylococci were the most common infecting organisms, accounting for 53.2% of all LOS episodes in singletons and 49.2% in multiples. Escherichia coli and Klebsiella species were the most commonly isolated gram-negative organisms, and Candida albicans was the most commonly isolated fungus. Concordance of LOS did not differ significantly between same-sex and unlike-sex twin pairs. LOS remains a common problem in VLBW infants. The incidence of LOS is similar for singleton and multiple-birth infants. The similar concordance of LOS in same-sex and unlike-sex twin pairs provides no evidence that susceptibility to LOS among VLBW infants is genetically determined. Copyright © 2013 Mosby, Inc. All rights reserved.