The Cypriot Indigenous Grapevine Germplasm Is a Multi-Clonal Varietal Mixture 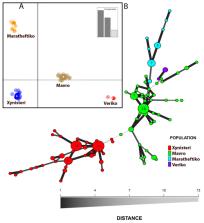 Cypriot vineyards are considered as one among the earliest niches of viticulture and a pivotal hub for the domestication and dissemination of grapevine. The millennial presence of Vitis spp. in this Eastern Mediterranean island has given rise to a plethora of biotypes that have not been adequately characterized, despite their unique attributes and stress tolerance. This ancient germplasm also has an additional value since it survived the phylloxera outbreak; hence, it possesses a large amount of genetic diversity that has been unnoticed. In order to provide useful insights to the lineage of Cypriot vineyards, a two-year-spanning collection of centennial grapevine cultivars mostly regarded to belong to four indigenous variety clusters (“Mavro”, “Xynisteri”, “Maratheftiko”, and “Veriko”) was initiated. There were 164 accessions across the broader Commandaria wine zone sampled and characterized using a universal microsatellite primer set. Genetic analysis indicated that considered indigenous Cypriot germplasm has a polyclonal structure with a high level of heterozygosity. Moreover, several lineages or unexplored varieties may exist, since a larger than considered number of discrete genotypes was discovered. Furthermore, it was established that grapevine lineages in Cyprus were shaped across eras via clonal, as well as, sexual propagation. The special attributes of the Cypriot landscape are discussed.

R Arroyo-García,  L Ruiz-García,  L Bolling … (2006)
The domestication of the Eurasian grape (Vitis vinifera ssp. sativa) from its wild ancestor (Vitis vinifera ssp. sylvestris) has long been claimed to have occurred in Transcaucasia where its greatest genetic diversity is found and where very early archaeological evidence, including grape pips and artefacts of a 'wine culture', have been excavated. Whether from Transcaucasia or the nearby Taurus or Zagros Mountains, it is hypothesized that this wine culture spread southwards and eventually westwards around the Mediterranean basin, together with the transplantation of cultivated grape cuttings. However, the existence of morphological differentiation between cultivars from eastern and western ends of the modern distribution of the Eurasian grape suggests the existence of different genetic contribution from local sylvestris populations or multilocal selection and domestication of sylvestris genotypes. To tackle this issue, we analysed chlorotype variation and distribution in 1201 samples of sylvestris and sativa genotypes from the whole area of the species' distribution and studied their genetic relationships. The results suggest the existence of at least two important origins for the cultivated germplasm, one in the Near East and another in the western Mediterranean region, the latter of which gave rise to many of the current Western European cultivars. Indeed, over 70% of the Iberian Peninsula cultivars display chlorotypes that are only compatible with their having derived from western sylvestris populations.

Development of a standard set of microsatellite reference alleles for identification of grape cultivars.

C Eisenheld,  V Laucou,  Priscila F Monteiro … (2004)
In order to investigate the comparability of microsatellite profiles obtained in different laboratories, ten partners in seven countries analyzed 46 grape cultivars at six loci (VVMD5, VVMD7, VVMD27, VVS2, VrZAG62, and VrZAG79). No effort was made to standardize equipment or protocols. Although some partners obtained very similar results, in other cases different absolute allele sizes and, sometimes, different relative allele sizes were obtained. A strategy for data comparison by means of reference to the alleles detected in well-known cultivars was proposed. For each marker, each allele was designated by a code based on the name of the reference cultivar carrying that allele. Thirty-three cultivars, representing from 13 to 23 alleles per marker, were chosen as references. After the raw data obtained by the different partners were coded, more than 97% of the data were in agreement. Minor discrepancies were attributed to errors, suboptimal amplification and visualization, and misscoring of heterozygous versus homozygous allele pairs. We have shown that coded microsatellite data produced in different laboratories with different protocols and conditions can be compared, and that it is suitable for the identification and SSR allele characterization of cultivars. It is proposed that the six markers employed here, already widely used, be adopted as a minimal standard marker set for future grapevine cultivar analyses, and that additional cultivars be characterized by means of the coded reference alleles presented here. The complete database is available at http://www.genres.de/eccdb/vitis/ Cuttings of the 33 reference cultivars are available on request from the Institut National de la Recherche Agronomique Vassal collection (didier.vares@ensam.inra.fr).

A Spada,  F. Grassi,  S Sgorbati … (2003)
The origin of the grapevine was investigated with archaeobotanical, cultural and historical data. A primary domestication centre was located in the Near East region but there is no agreement on the existence or role of secondary domestication centres. In this work, PCR-based microsatellite analysis has been applied to study the origin of some Italian cultivated grapevines from in situ direct domestication of the wild autoctonous grapevine. Three different Italian locations in Grosseto, Cosenza and Nuoro were identified for this study, and domesticated grapevine as well as wild local accessions growing in these location, were analysed by SSR markers. Cluster analysis performed on Cosenza and Grosseto samples showed a high value of genetic distance between domesticated and wild accessions. On the contrary two cultivars (Bovale Murru and Bovale Muristellu) recovered in Nuoro (in the Sardinia island) were very close to some wild varieties. This suggests that the latter two cultivars may have originated from wild grapevines and consequently that in this location a secondary grapevine domestication event occurred. Six Lambrusco varieties were also included in this analysis as ancient putative ancestors of the cultivated grapevines. The molecular analysis excluded this hypothesis and suggest Lambrusco as an independent Vitis taxon.