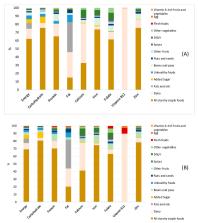 Poor dietary intake during pregnancy remains a significant public health concern, affecting the health of the mother and fetus. This study examines the adequacy of energy, macronutrient, and micronutrient intakes among self-declared lacto-vegetarian and non-vegetarian pregnant women. We analyzed dietary data from 627 pregnant women in Uttar Pradesh, India, using a multiple-pass 24 h diet recall. Compared to non-vegetarians, lacto-vegetarians (~46%) were less likely to report excessive carbohydrate (78% vs. 63%) and inadequate fat intakes (70% vs. 52%). In unadjusted analyses, lacto-vegetarians had a slightly higher mean PA for micronutrients (20% vs. 17%), but these differences were no longer significant after controlling for caste, education, and other demographic characteristics. In both groups, the median intake of 9 out of 11 micronutrients was below the Estimated Average Requirement. In conclusion, the energy and micronutrient intakes were inadequate, and the macronutrient intakes were imbalanced, regardless of stated dietary preferences. Since diets are poor across the board, a range of policies and interventions that address the household food environment, nutrition counseling, behavior change, and supplementation are needed in order to achieve adequate nutrient intake for pregnant women in this population.

Rebecca Stoltzfus (2003)
Iron deficiency is considered to be one of most prevalent forms of malnutrition, yet there has been a lack of consensus about the nature and magnitude of the health consequences of iron deficiency in populations. This paper presents new estimates of the public health importance of iron-deficiency anemia (IDA), which were made as part of the Global Burden of Disease (GBD) 2000 project. Iron deficiency is considered to contribute to death and disability as a risk factor for maternal and perinatal mortality, and also through its direct contributions to cognitive impairment, decreased work productivity, and death from severe anemia. Based on meta-analysis of observational studies, mortality risk estimates for maternal and perinatal mortality are calculated as the decreased risk in mortality for each 1 g/dl increase in mean pregnancy hemoglobin concentration. On average, globally, 50% of the anemia is assumed to be attributable to iron deficiency. Globally, iron deficiency ranks number 9 among 26 risk factors included in the GBD 2000, and accounts for 841,000 deaths and 35,057,000 disability-adjusted life years lost. Africa and parts of Asia bear 71% of the global mortality burden and 65% of the disability-adjusted life years lost, whereas North America bears 1.4% of the global burden. There is an urgent need to develop effective and sustainable interventions to control iron-deficiency anemia. This will likely not be achieved without substantial involvement of the private sector.

Dietary intakes of women during pregnancy in low- and middle-income countries.

Sameera Talegawkar, Mario Merialdi, S Lee … (2013)
To provide a better understanding of dietary intakes of pregnant women in low- and middle-income countries. Systematic review was performed to identify relevant studies which reported nutrient intakes or food consumption of pregnant women in developing countries. Macronutrient and micronutrient intakes were compared by region and the FAO/WHO Estimated Average Requirements. Food consumption was summarized by region. Developing countries in Africa, Asia, and the Caribbean and Central/South America. Pregnant women in the second or third trimester of their pregnancies. From a total of 1499 retrieved articles, sixty-two relevant studies were analysed. The ranges of mean/median intakes of energy, fat, protein and carbohydrate were relatively higher in women residing in the Caribbean and Central/South America than in Africa and Asia. Percentages of energy from carbohydrate and fat varied inversely across studies in all regions, whereas percentage of energy from protein was relatively stable. Among selected micronutrients, folate and Fe intakes were most frequently below the Estimated Average Requirements, followed by Ca and Zn. Usual dietary patterns were heavily cereal based across regions. Imbalanced macronutrients, inadequate micronutrient intakes and predominantly plant-based diets were common features of the diet of pregnant women in developing countries. Cohesive public health efforts involving improving access to nutrient-rich local foods, micronutrient supplementation and fortification are needed to improve the nutrition of pregnant women in developing countries.