Relationships Between Circulating Metabolic Intermediates and Insulin Action in Overweight to Obese, Inactive Men and Women 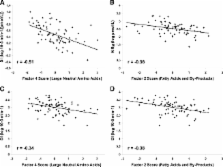 To determine whether circulating metabolic intermediates are related to insulin resistance and β-cell dysfunction in individuals at risk for type 2 diabetes.

Sangeeta Kashyap,  Renata Belfort,  Amalia Gastaldelli … (2003)
Acute elevations in free fatty acids (FFAs) stimulate insulin secretion, but prolonged lipid exposure impairs beta-cell function in both in vitro studies and in vivo animal studies. In humans data are limited to short-term (< or =48 h) lipid infusion studies and have led to conflicting results. We examined insulin secretion and action during a 4-day lipid infusion in healthy normal glucose tolerant subjects with (FH+ group, n = 13) and without (control subjects, n = 8) a family history of type 2 diabetes. Volunteers were admitted twice to the clinical research center and received, in random order, a lipid or saline infusion. On days 1 and 2, insulin and C-peptide concentration were measured as part of a metabolic profile after standardized mixed meals. Insulin secretion in response to glucose was assessed with a +125 mg/dl hyperglycemic clamp on day 3. On day 4, glucose turnover was measured with a euglycemic insulin clamp with [3-3H]glucose. Day-long plasma FFA concentrations with lipid infusion were increased within the physiological range, to levels seen in type 2 diabetes (approximately 500-800 micromol/l). Lipid infusion had strikingly opposite effects on insulin secretion in the two groups. After mixed meals, day-long plasma C-peptide levels increased with lipid infusion in control subjects but decreased in the FH+ group (+28 vs. -30%, respectively, P < 0.01). During the hyperglycemic clamp, lipid infusion enhanced the insulin secretion rate (ISR) in control subjects but decreased it in the FH+ group (first phase: +75 vs. -60%, P < 0.001; second phase: +25 vs. -35%, P < 0.04). When the ISR was adjusted for insulin resistance (ISRRd = ISR / [1/Rd], where Rd is the rate of insulin-stimulated glucose disposal), the inadequate beta-cell response in the FH+ group was even more evident. Although ISRRd was not different between the two groups before lipid infusion, in the FH+ group, lipid infusion reduced first- and second-phase ISR(Rd) to 25 and 42% of that in control subjects, respectively (both P < 0.001 vs. control subjects). Lipid infusion in the FH+ group (but not in control subjects) also caused severe hepatic insulin resistance with an increase in basal endogenous glucose production (EGP), despite an elevation in fasting insulin levels, and impaired suppression of EGP to insulin. In summary, in individuals who are genetically predisposed to type 2 diabetes, a sustained physiological increase in plasma FFA impairs insulin secretion in response to mixed meals and to intravenous glucose, suggesting that in subjects at high risk of developing type 2 diabetes, beta-cell lipotoxicity may play an important role in the progression from normal glucose tolerance to overt hyperglycemia.