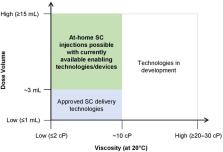 Subcutaneous (SC) delivery of biologics has traditionally been limited to fluid volumes of 1–2 mL, with recent increases to volumes of about 3 mL. This injection volume limitation poses challenges for high-dose biologics, as these formulations may also require increased solution concentration in many cases, resulting in high viscosities which can affect the stability, manufacturability, and delivery/administration of therapeutic drugs. Currently, there are technologies that can help to overcome these challenges and facilitate the delivery of larger amounts of drug through the SC route. This can be achieved either by enabling biologic molecules to be formulated or delivered as high-concentration injectables (>100 mg/mL for antibodies) or through facilitating the delivery of larger volumes of fluid (>3 mL). The SC Drug Delivery and Development Consortium, which was established in 2018, aims to identify and address critical gaps and issues in the SC delivery of high-dose/volume products to help expand this delivery landscape. Identified as a high priority out of the Consortium’s eight problem statements, it highlights the need to shift perceptions of the capabilities of technologies that enable the SC delivery of large-volume (>3 mL) and/or high-dose biologics. The Consortium emphasizes a patient-focused approach towards the adoption of SC delivery of large-volume/high-concentration dosing products to facilitate the continued expansion of the capabilities of novel SC technologies. To raise awareness of the critical issues and gaps in high-dose/volume SC drug development, this review article provides a generalized overview of currently available and emerging technologies and devices that could facilitate SC delivery of high-dose/volume drug formulations. In addition, it discusses the challenges, gaps, and future outlook in high-dose/volume SC delivery as well as potential solutions to exploit the full value of the SC route of administration.

Preference for subcutaneous or intravenous administration of trastuzumab in patients with HER2-positive early breast cancer (PrefHer): an open-label randomised study.

G Frost (2007)
The extracellular matrix is a significant barrier to the effective subcutaneous delivery of many drugs, limiting both pharmacokinetic parameters and injection volumes. The space outside adipocytes in the hypodermis is not a fluid, but rather a solid extracellular matrix of collageneous fibrils embedded within a glycosaminoglycan-rich viscoelastic gel that buffers convective forces. The extracellular matrix limits the volume of drug that can be injected at a single site, as well as the rate and amount that reach the vascular compartment. A fully human recombinant DNA-derived hyaluronidase enzyme (rHuPH20) has been developed to leverage the historical efficacy of animal testes extract-derived spreading factors to reversibly modify the hypodermis, in light of discovery of the human hyaluronidase gene family. The application of this technology to increase both injection volumes and bioavailability from subcutaneous injection may overcome some key limitations of this route of administration in multiple settings of care.