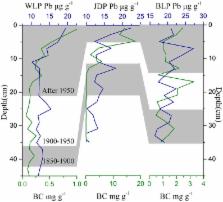 Black carbon (BC), an important component of organic carbon (OC) produced from incomplete combustion of carbon compounds, is widespread and affects the global carbon storage. The objectives of this study were to analyze the BC contents and fluxes in the last 150 years to determine the causes of differences in the three profiles of the Songnen Plain of Northeast China and to estimate the BC storage in the wetlands of the Songnen Plain. In the three sampling sites, BC fluxes in the period between 1950 and the present time increased by the ratios of 1.3, 31.1 and 1.4, respectively, compared to their own baseline between 1850 and 1900. Furthermore, the BC fluxes varying from 0.76 to 5.63 g m -2 y -1 in the three profiles had an opposite trend with the sand percentages with mean values changing from 78.9% to 19.6%, suggesting that sand desertification might additionally affect the BC processes in the region.

Climate effects of black carbon aerosols in China and India.

S Menon (2002)
In recent decades, there has been a tendency toward increased summer floods in south China, increased drought in north China, and moderate cooling in China and India while most of the world has been warming. We used a global climate model to investigate possible aerosol contributions to these trends. We found precipitation and temperature changes in the model that were comparable to those observed if the aerosols included a large proportion of absorbing black carbon ("soot"), similar to observed amounts. Absorbing aerosols heat the air, alter regional atmospheric stability and vertical motions, and affect the large-scale circulation and hydrologic cycle with significant regional climate effects.

Strong radiative heating due to the mixing state of black carbon in atmospheric aerosols.

Z Jacobson,  Jeffrey M. Jacobson (2001)
Aerosols affect the Earth's temperature and climate by altering the radiative properties of the atmosphere. A large positive component of this radiative forcing from aerosols is due to black carbon--soot--that is released from the burning of fossil fuel and biomass, and, to a lesser extent, natural fires, but the exact forcing is affected by how black carbon is mixed with other aerosol constituents. From studies of aerosol radiative forcing, it is known that black carbon can exist in one of several possible mixing states; distinct from other aerosol particles (externally mixed) or incorporated within them (internally mixed), or a black-carbon core could be surrounded by a well mixed shell. But so far it has been assumed that aerosols exist predominantly as an external mixture. Here I simulate the evolution of the chemical composition of aerosols, finding that the mixing state and direct forcing of the black-carbon component approach those of an internal mixture, largely due to coagulation and growth of aerosol particles. This finding implies a higher positive forcing from black carbon than previously thought, suggesting that the warming effect from black carbon may nearly balance the net cooling effect of other anthropogenic aerosol constituents. The magnitude of the direct radiative forcing from black carbon itself exceeds that due to CH4, suggesting that black carbon may be the second most important component of global warming after CO2 in terms of direct forcing.

Radiative absorption enhancements due to the mixing state of atmospheric black carbon.

Christopher D. Cappa,  R Kolesar,  Romesh R. Subramanian … (2012)
Atmospheric black carbon (BC) warms Earth's climate, and its reduction has been targeted for near-term climate change mitigation. Models that include forcing by BC assume internal mixing with non-BC aerosol components that enhance BC absorption, often by a factor of ~2; such model estimates have yet to be clearly validated through atmospheric observations. Here, direct in situ measurements of BC absorption enhancements (E(abs)) and mixing state are reported for two California regions. The observed E(abs) is small-6% on average at 532 nm-and increases weakly with photochemical aging. The E(abs) is less than predicted from observationally constrained theoretical calculations, suggesting that many climate models may overestimate warming by BC. These ambient observations stand in contrast to laboratory measurements that show substantial E(abs) for BC are possible.

Financial support was provided by the National Natural Science Foundation of China (No. 41271209, 41571191), the National Basic Research Program (No. 2012CB956100), and the CAS/SAFEA International Partnership Program for Creative Research Teams (No. KZZD-EW-TZ-07). The funders had no role in study design, data collection and analysis, decision to publish, or preparation of the manuscript.