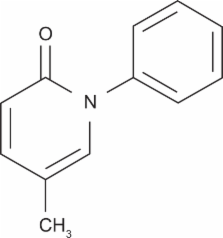 Idiopathic pulmonary fibrosis (IPF) is a discrete clinicopathologic entity defined by the presence of usual interstitial pneumonia on high-resolution CT scan and/or open lung biopsy and the absence of an alternate diagnosis or exposure explaining these findings. There are currently no FDA-approved therapies available to treat this disease, and the 5-year mortality is ∼80%. The pyridone derivative pirfenidone has been studied extensively as a possible therapeutic agent for use in this deadly disease. This review will present the unique clinical features and management issues encountered by physicians caring for IPF patients, including the poor response to conventional therapy. The biochemistry and preclinical efficacy of pirfenidone will be discussed along with a comprehensive review of the clinical efficacy, safety, and side effects and patient-centered foci such as quality of life and tolerability. It is hoped that this information will lend insight into the complex issues surrounding the use of pirfenidone in IPF and lead to further investigation of this agent as a possible therapy in this devastating disease.

David Flaherty,  Alma E. Martínez (2006)
Diffuse parenchymal lung diseases are a group of disorders that involve the space between the epithelial and endothelial basement membranes and are generally segregated into four major categories. These include the idiopathic interstitial pneumonias, which are further categorized into seven clinical/radiologic/pathologic subsets. These disorders generally share a common pattern of physiologic abnormality characterized by a restrictive ventilatory defect and reduced diffusing capacity (DLCO). Pulmonary function testing is often used and recommended in their assessment and management. The potential clinical application of physiologic testing includes to aid in diagnosis, although its value in differential diagnosis is limited. Pulmonary function testing also aids in establishing disease severity and in defining prognosis. In nonspecific interstitial pneumonia and idiopathic pulmonary fibrosis, severely decreased DLCO has proven valuable in this regard. Similarly, exertional desaturation to less than 88% at baseline testing and a decrease in FVC (greater than 10%) over the course of short-term follow-up identify patients at particular risk of mortality. Finally, physiologic testing, especially spirometry and DLCO, have demonstrated value in monitoring response to therapy and identifying disease progression.

Pirfenidone prevents collagen accumulation in the remnant kidney in rats with partial nephrectomy.

S Margolin,  S Hata,  S Yamauchi … (1997)
Pirfenidone (PFD) is a new compound that prevents and even reverses the extracellular matrix accumulation in several organs as shown by experimental and clinical studies. In the present study, we examined the effect of PFD (500 mg/kg daily in the food) on the progression of chronic renal failure (CRF) in the 5/6 nephrectomy rat model. Proteinuria progressively increased in rats with renal ablation (C) at 12 weeks. Urinary protein excretion in PFD-treated rats (P) was numerically lower than C, but the difference did not reach statistical significance. In contrast, in the chronic phase, PFD improved renal function and reduced collagen accumulation detected by hydroxyproline content (OH-Pro) in the cortex of the remnant kidney. Although creatinine clearance decreased with time in C, the values in P were significantly better at 10 and 12 weeks. The OH-Pro in C at 12 weeks was significantly higher than that of no-ablation, sham-operated rats, whereas OH-Pro in CRF was lower in (P). Expression of mRNA for type IV and I collagen in the cortex also increased in C, but it was inhibited in (P). To study the role that TGF-beta plays in the regulatory process following CRF, we examined the expression of TGF-beta mRNA in this model. Levels of cortical TGF-beta mRNA in C were significantly elevated at 12 weeks. The increase was suppressed by PFD. These results demonstrate that PFD attenuates the development of CRF by preventing collagen accumulation in this model, and suggest that PFD can be clinically useful for treating CRF.