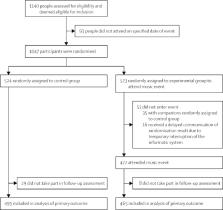 The banning of mass-gathering indoor events to prevent SARS-CoV-2 spread has had an important effect on local economies. Despite growing evidence on the suitability of antigen-detecting rapid diagnostic tests (Ag-RDT) for mass screening at the event entry, this strategy has not been assessed under controlled conditions. We aimed to assess the effectiveness of a prevention strategy during a live indoor concert.

We designed a randomised controlled open-label trial to assess the effectiveness of a comprehensive preventive intervention for a mass-gathering indoor event (a live concert) based on systematic same-day screening of attendees with Ag-RDTs, use of facial masks, and adequate air ventilation. The event took place in the Sala Apolo, Barcelona, Spain. Adults aged 18–59 years with a negative result in an Ag-RDT from a nasopharyngeal swab collected immediately before entering the event were randomised 1:1 (block randomisation stratified by age and gender) to either attend the indoor event for 5 hours or go home. Nasopharyngeal specimens used for Ag-RDT screening were analysed by real-time reverse-transcriptase PCR (RT-PCR) and cell culture (Vero E6 cells). 8 days after the event, a nasopharyngeal swab was collected and analysed by Ag-RDT, RT-PCR, and a transcription-mediated amplification test (TMA). The primary outcome was the difference in incidence of RT-PCR-confirmed SARS-CoV-2 infection at 8 days between the control and the intervention groups, assessed in all participants who were randomly assigned, attended the event, and had a valid result for the SARS-CoV-2 test done at follow-up. The trial is registered at ClinicalTrials.gov, NCT04668625.

Participant enrollment took place during the morning of the day of the concert, Dec 12, 2020. Of the 1140 people who responded to the call and were deemed eligible, 1047 were randomly assigned to either enter the music event (experimental group) or continue with normal life (control group). Of the 523 randomly assigned to the experimental group, 465 were included in the analysis of the primary outcome (51 did not enter the event and eight did not take part in the follow-up assessment), and of the 524 randomly assigned to the control group, 495 were included in the final analysis (29 did not take part in the follow-up). At baseline, 15 (3%) of 495 individuals in the control group and 13 (3%) of 465 in the experimental group tested positive on TMA despite a negative Ag-RDT result. The RT-PCR test was positive in one case in each group and cell viral culture was negative in all cases. 8 days after the event, two (<1%) individuals in the control arm had a positive Ag-RDT and PCR result, whereas no Ag-RDT nor RT-PCR positive results were found in the intervention arm. The Bayesian estimate for the incidence between the experimental and control groups was –0·15% (95% CI –0·72 to 0·44).

Our study provides preliminary evidence on the safety of indoor mass-gathering events during a COVID-19 outbreak under a comprehensive preventive intervention. The data could help restart cultural activities halted during COVID-19, which might have important sociocultural and economic implications.

For the Spanish translation of the abstract see Supplementary Materials section.

Temporal dynamics in viral shedding and transmissibility of COVID-19

Xi. He, Eric Lau, Peng Wu … (2020)
We report temporal patterns of viral shedding in 94 patients with laboratory-confirmed COVID-19 and modeled COVID-19 infectiousness profiles from a separate sample of 77 infector-infectee transmission pairs. We observed the highest viral load in throat swabs at the time of symptom onset, and inferred that infectiousness peaked on or before symptom onset. We estimated that 44% (95% confidence interval, 25-69%) of secondary cases were infected during the index cases' presymptomatic stage, in settings with substantial household clustering, active case finding and quarantine outside the home. Disease control measures should be adjusted to account for probable substantial presymptomatic transmission.

Transmission of 2019-nCoV Infection from an Asymptomatic Contact in Germany

Camilla Rothe, Mirjam Schunk, Peter Sothmann … (2020)
To the Editor: The novel coronavirus (2019-nCoV) from Wuhan is currently causing concern in the medical community as the virus is spreading around the world. 1 Since identification of the virus in late December 2019, the number of cases from China that have been imported into other countries is on the rise, and the epidemiologic picture is changing on a daily basis. We are reporting a case of 2019-nCoV infection acquired outside Asia in which transmission appears to have occurred during the incubation period in the index patient. A 33-year-old otherwise healthy German businessman (Patient 1) became ill with a sore throat, chills, and myalgias on January 24, 2020. The following day, a fever of 39.1°C (102.4°F) developed, along with a productive cough. By the evening of the next day, he started feeling better and went back to work on January 27. Before the onset of symptoms, he had attended meetings with a Chinese business partner at his company near Munich on January 20 and 21. The business partner, a Shanghai resident, had visited Germany between January 19 and 22. During her stay, she had been well with no signs or symptoms of infection but had become ill on her flight back to China, where she tested positive for 2019-nCoV on January 26 (index patient in Figure 1) (see Supplementary Appendix, available at NEJM.org, for details on the timeline of symptom development leading to hospitalization). On January 27, she informed the company about her illness. Contact tracing was started, and the above-mentioned colleague was sent to the Division of Infectious Diseases and Tropical Medicine in Munich for further assessment. At presentation, he was afebrile and well. He reported no previous or chronic illnesses and had no history of foreign travel within 14 days before the onset of symptoms. Two nasopharyngeal swabs and one sputum sample were obtained and were found to be positive for 2019-nCoV on quantitative reverse-transcriptase–polymerase-chain-reaction (qRT-PCR) assay. 2 Follow-up qRT-PCR assay revealed a high viral load of 108 copies per milliliter in his sputum during the following days, with the last available result on January 29. On January 28, three additional employees at the company tested positive for 2019-nCoV (Patients 2 through 4 in Figure 1). Of these patients, only Patient 2 had contact with the index patient; the other two patients had contact only with Patient 1. In accordance with the health authorities, all the patients with confirmed 2019-nCoV infection were admitted to a Munich infectious diseases unit for clinical monitoring and isolation. So far, none of the four confirmed patients show signs of severe clinical illness. This case of 2019-nCoV infection was diagnosed in Germany and transmitted outside Asia. However, it is notable that the infection appears to have been transmitted during the incubation period of the index patient, in whom the illness was brief and nonspecific. 3 The fact that asymptomatic persons are potential sources of 2019-nCoV infection may warrant a reassessment of transmission dynamics of the current outbreak. In this context, the detection of 2019-nCoV and a high sputum viral load in a convalescent patient (Patient 1) arouse concern about prolonged shedding of 2019-nCoV after recovery. Yet, the viability of 2019-nCoV detected on qRT-PCR in this patient remains to be proved by means of viral culture. Despite these concerns, all four patients who were seen in Munich have had mild cases and were hospitalized primarily for public health purposes. Since hospital capacities are limited — in particular, given the concurrent peak of the influenza season in the northern hemisphere — research is needed to determine whether such patients can be treated with appropriate guidance and oversight outside the hospital.

Evolution of antibody immunity to SARS-CoV-2

Christian Gaebler, Zijun Wang, Julio C C Lorenzi … (2021)
Severe acute respiratory syndrome coronavirus 2 (SARS-CoV-2) has infected 78 million individuals and is responsible for over 1.7 million deaths to date. Infection is associated with the development of variable levels of antibodies with neutralizing activity, which can protect against infection in animal models1,2. Antibody levels decrease with time, but, to our knowledge, the nature and quality of the memory B cells that would be required to produce antibodies upon reinfection has not been examined. Here we report on the humoral memory response in a cohort of 87 individuals assessed at 1.3 and 6.2 months after infection with SARS-CoV-2. We find that titres of IgM and IgG antibodies against the receptor-binding domain (RBD) of the spike protein of SARS-CoV-2 decrease significantly over this time period, with IgA being less affected. Concurrently, neutralizing activity in plasma decreases by fivefold in pseudotype virus assays. By contrast, the number of RBD-specific memory B cells remains unchanged at 6.2 months after infection. Memory B cells display clonal turnover after 6.2 months, and the antibodies that they express have greater somatic hypermutation, resistance to RBD mutations and increased potency, indicative of continued evolution of the humoral response. Immunofluorescence and PCR analyses of intestinal biopsies obtained from asymptomatic individuals at 4 months after the onset of coronavirus disease 2019 (COVID-19) revealed the persistence of SARS-CoV-2 nucleic acids and immunoreactivity in the small bowel of 7 out of 14 individuals. We conclude that the memory B cell response to SARS-CoV-2 evolves between 1.3 and 6.2 months after infection in a manner that is consistent with antigen persistence.