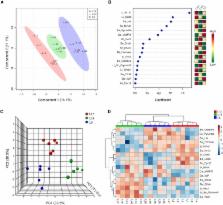 Seasonal variations in day length trigger clear changes in the behavior, growth, food intake, and reproductive status of photoperiod-sensitive animals, such as Fischer 344 rats. However, there is little information about the effects of seasonal fluctuations in day length on glucose and lipid metabolisms and their underlying mechanisms in this model. To gain knowledge on these issues, three groups of male Fischer 344 rats were fed with a standard diet and exposed to different photoperiods for 14 weeks: normal photoperiod (L12, 12 h light/day), long photoperiod (L18, 18 h light/day), and short photoperiod (L6, 6 h light/day). A multivariate analysis carried out with 239 biometric, serum, hepatic and skeletal muscle parameters revealed a clear separation among the three groups. Compared with L12 rats, L6 animals displayed a marked alteration of glucose homeostasis and fatty acid uptake and oxidation, which were evidenced by the following observations: (1) increased circulating levels of glucose and non-esterified fatty acids; (2) a sharp down-regulation of the phosphorylated Akt2 levels, a downstream post-receptor target of insulin, in both the soleus and gastrocnemius muscles; (3) decreased expression in the soleus muscle of the glucose metabolism-related microRNA-194 and lower mRNA levels of the genes involved in glucose metabolism ( Irs1, soleus, and Glut2, liver), β-oxidation ( Had and Cpt1β, soleus) and fatty acid transport ( Cd36, soleus, and liver). L18 animals also displayed higher blood glucose levels than L12 rats and profound changes in other glucose and lipid metabolism-related parameters in the blood, liver, and skeletal muscles. However, the mechanisms that account for the observed effects were less evident than those reported in L6 animals. In conclusion, exposure to different photoperiods strongly modulated glucose and lipid metabolisms in normoweight rats. These findings emphasize the relevance of circannual rhythms in metabolic homeostasis regulation and suggest that Fischer 344 rats are a promising animal model with which to study glucose- and lipid-related pathologies that are influenced by seasonal variations, such as obesity, cardiovascular disease and seasonal affective disorder.

Biliana Marcheva,  Kathryn Moynihan Ramsey,  Ethan D Buhr … (2010)
The molecular clock maintains energy constancy by producing circadian oscillations of rate-limiting enzymes involved in tissue metabolism across the day and night1–3. During periods of feeding, pancreatic islets secrete insulin to maintain glucose homeostasis, and while rhythmic control of insulin release is recognized to be dysregulated in humans with diabetes4, it is not known how the circadian clock may affect this process. Here we show that pancreatic islets possess self-sustained circadian gene and protein oscillations of the transcription factors CLOCK and BMAL1. The phase of oscillation of islet genes involved in growth, glucose metabolism, and insulin signaling is delayed in circadian mutant mice, and both Clock 5,6 and Bmal1 7 mutants exhibit impaired glucose tolerance, reduced insulin secretion, and defects in size and proliferation of pancreatic islets that worsen with age. Clock disruption leads to transcriptome-wide alterations in the expression of islet genes involved in growth, survival, and synaptic vesicle assembly. Remarkably, conditional ablation of the pancreatic clock causes diabetes mellitus due to defective β-cell function at the very latest stage of stimulus-secretion coupling. These results demonstrate a role for the β-cell clock in coordinating insulin secretion with the sleep-wake cycle, and reveal that ablation of the pancreatic clock can trigger onset of diabetes mellitus.

BMAL1 and CLOCK, Two Essential Components of the Circadian Clock, Are Involved in Glucose Homeostasis

This article was submitted to Integrative Physiology, a section of the journal Frontiers in Physiology