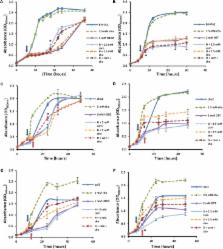 L-Carnitine is a key metabolite in the energy metabolism of eukaryotic cells, functioning as a shuttling molecule for activated acyl-residues between cellular compartments. In higher eukaryotes this function is essential, and defects in carnitine metabolism has severe effects on fatty acid and carbon metabolism. Carnitine supplementation has been associated with an array of mostly beneficial impacts in higher eukaryotic cells, including stress protection and regulation of redox metabolism in diseased cells. Some of these phenotypes have no obvious link to the carnitine shuttle, and suggest that carnitine has as yet unknown shuttle-independent functions. The existence of shuttle-independent functions has also been suggested in Saccharomyces cerevisiae, including a beneficial effect during hydrogen peroxide stress and a detrimental impact when carnitine is co-supplemented with the reducing agent dithiothreitol (DTT). Here we used these two distinct yeast phenotypes to screen for potential genetic factors that suppress the shuttle independent physiological effects of carnitine. Two deletion strains, Δ cho2 and Δ opi3, coding for enzymes that catalyze the sequential conversion of phosphatidylethanolamine to phosphatidylcholine were identified for suppressing the phenotypic effects of carnitine. Additional characterisation indicated that the suppression cannot be explained by differences in phospholipid homeostasis. The phenotypes could be reinstated by addition of extracellular choline, but show that the requirement for choline is not based on some overlapping function or the structural similarities of the two molecules. This is the first study to suggest a molecular link between a specific metabolite and carnitine-dependent, but shuttle-independent phenotypes in eukaryotes.

J Sampaio,  Andrej Shevchenko,  Vineeth Surendranath … (2009)
Although the transcriptome, proteome, and interactome of several eukaryotic model organisms have been described in detail, lipidomes remain relatively uncharacterized. Using Saccharomyces cerevisiae as an example, we demonstrate that automated shotgun lipidomics analysis enabled lipidome-wide absolute quantification of individual molecular lipid species by streamlined processing of a single sample of only 2 million yeast cells. By comparative lipidomics, we achieved the absolute quantification of 250 molecular lipid species covering 21 major lipid classes. This analysis provided approximately 95% coverage of the yeast lipidome achieved with 125-fold improvement in sensitivity compared with previous approaches. Comparative lipidomics demonstrated that growth temperature and defects in lipid biosynthesis induce ripple effects throughout the molecular composition of the yeast lipidome. This work serves as a resource for molecular characterization of eukaryotic lipidomes, and establishes shotgun lipidomics as a powerful platform for complementing biochemical studies and other systems-level approaches.

Metabolism and Regulation of Glycerolipids in the Yeast Saccharomyces cerevisiae

Susan A. Henry,  Sepp D Kohlwein,  George Carman (2012)
Due to its genetic tractability and increasing wealth of accessible data, the yeast Saccharomyces cerevisiae is a model system of choice for the study of the genetics, biochemistry, and cell biology of eukaryotic lipid metabolism. Glycerolipids (e.g., phospholipids and triacylglycerol) and their precursors are synthesized and metabolized by enzymes associated with the cytosol and membranous organelles, including endoplasmic reticulum, mitochondria, and lipid droplets. Genetic and biochemical analyses have revealed that glycerolipids play important roles in cell signaling, membrane trafficking, and anchoring of membrane proteins in addition to membrane structure. The expression of glycerolipid enzymes is controlled by a variety of conditions including growth stage and nutrient availability. Much of this regulation occurs at the transcriptional level and involves the Ino2–Ino4 activation complex and the Opi1 repressor, which interacts with Ino2 to attenuate transcriptional activation of UASINO-containing glycerolipid biosynthetic genes. Cellular levels of phosphatidic acid, precursor to all membrane phospholipids and the storage lipid triacylglycerol, regulates transcription of UASINO-containing genes by tethering Opi1 to the nuclear/endoplasmic reticulum membrane and controlling its translocation into the nucleus, a mechanism largely controlled by inositol availability. The transcriptional activator Zap1 controls the expression of some phospholipid synthesis genes in response to zinc availability. Regulatory mechanisms also include control of catalytic activity of glycerolipid enzymes by water-soluble precursors, products and lipids, and covalent modification of phosphorylation, while in vivo function of some enzymes is governed by their subcellular location. Genome-wide genetic analysis indicates coordinate regulation between glycerolipid metabolism and a broad spectrum of metabolic pathways.

Gisela Vaz,  Ronald J. A. Wanders (2002)
Carnitine is indispensable for energy metabolism, since it enables activated fatty acids to enter the mitochondria, where they are broken down via beta-oxidation. Carnitine is probably present in all animal species, and in numerous micro-organisms and plants. In mammals, carnitine homoeostasis is maintained by endogenous synthesis, absorption from dietary sources and efficient tubular reabsorption by the kidney. This review aims to cover the current knowledge of the enzymological, molecular, metabolic and regulatory aspects of mammalian carnitine biosynthesis, with an emphasis on the human and rat.