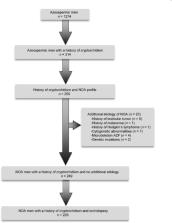 The Istanbul consensus workshop on embryo assessment: proceedings of an expert meeting.

JONATHAN VAN BLERKOM (2011)
Many variations in oocyte and embryo grading make inter-laboratory comparisons extremely difficult. This paper reports the proceedings of an international consensus meeting on oocyte and embryo morphology assessment. Background presentations about current practice were given. The expert panel developed a set of consensus points to define the minimum criteria for oocyte and embryo morphology assessment. It is expected that the definition of common terminology and standardization of laboratory practice related to embryo morphology assessment will result in more effective comparisons of treatment outcomes. This document is intended to be referenced as a global consensus to allow standardized reporting of the minimum data set required for the accurate description of embryo development.

Structural and functional changes to the testis after conventional versus microdissection testicular sperm extraction.

Ranjith Ramasamy,  Neda Yagan,  Peter Schlegel (2005)
To compare, in a retrospective study, the ultrasound findings and hormonal changes after testicular sperm extraction (TESE) using the conventional multiple biopsy approach and the more recent microdissection technique. TESE has been performed using the conventional multiple biopsy approach and the more recent microdissection technique. A total of 435 men with nonobstructive azoospermia who had undergone 543 TESE attempts were included in the study. The initial 83 attempts were done using the conventional open technique and the remaining 460 attempts were performed by microdissection. The sperm retrieval rates were compared, as were the complication rates as assessed by ultrasound and endocrinologic evaluations between the two groups. The retrieval rate by the conventional technique was 32% and by microdissection was 57% (P = 0.0002). In patients with hypospermatogenesis, the retrieval rate differed between the two approaches (P = 0.03). Ultrasound findings demonstrated fewer acute and chronic changes in the microdissection group than in the conventional group (P < 0.05). At 3 to 6 months after surgery, the testosterone levels had dropped to 80% of their pre-TESE levels in both groups (P < 0.01). The levels rose back to 85% after 12 months and to 95% after 18 months. The mean follicle-stimulating hormone levels increased from 22 +/- 2 to 30 +/- 3 IU/L (P = 0.02), and the luteinizing hormone levels increased from 12 +/- 2 to 16 +/- 2 IU/L (P = 0.2). TESE has effects on testicular function, but the microdissection procedure is relatively safer than the conventional technique and improves the sperm retrieval rate significantly in patients with nonobstructive azoospermia.

Role of hormones, genes, and environment in human cryptorchidism.

Daniela Zuccarello,  Andrea Garolla,  Carlo Foresta … (2008)
Cryptorchidism is the most frequent congenital birth defect in male children (2-4% in full-term male births), and it has the potential to impact the health of the human male. In fact, although it is often considered a mild malformation, it represents the best-characterized risk factor for reduced fertility and testicular cancer. Furthermore, some reports have highlighted a significant increase in the prevalence of cryptorchidism over the last few decades. Etiology of cryptorchidism remains for the most part unknown, and cryptorchidism itself might be considered a complex disease. Major regulators of testicular descent from intraabdominal location into the bottom of the scrotum are the Leydig-cell-derived hormones testosterone and insulin-like factor 3. Research on possible genetic causes of cryptorchidism has increased recently. Abundant animal evidence supports a genetic cause, whereas the genetic contribution to human cryptorchidism is being elucidated only recently. Mutations in the gene for insulin-like factor 3 and its receptor and in the androgen receptor gene have been recognized as causes of cryptorchidism in some cases, but some chromosomal alterations, above all the Klinefelter syndrome, are also frequently involved. Environmental factors acting as endocrine disruptors of testicular descent might also contribute to the etiology of cryptorchidism and its increased incidence in recent years. Furthermore, polymorphisms in different genes have recently been investigated as contributing risk factors for cryptorchidism, alone or by influencing susceptibility to endocrine disruptors. Obviously, the interaction of environmental and genetic factors is fundamental, and many aspects have been clarified only recently.