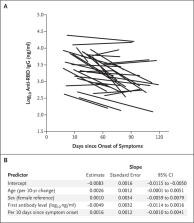 Bookmark
There is no author summary for this article yet. Authors can add summaries to their articles on ScienceOpen to make them more accessible to a non-specialist audience.
To the Editor: A recent article suggested the rapid decay of anti–SARS-CoV-2 IgG in early infection, 1 but the rate was not described in detail. We evaluated persons who had recovered from Covid-19 and referred themselves to our institution for observational research. Written informed consent was obtained from all the participants, with approval by the institutional review board. Blood samples were analyzed by enzyme-linked immunosorbent assay (ELISA) to detect anti–SARS-CoV-2 spike receptor-binding domain IgG. 2 The ELISA was further modified to precisely quantify serum anti–receptor-binding domain activity in terms of equivalence to the concentration of a control anti–receptor-binding domain monoclonal IgG (CR3022, Creative Biolabs). Infection had been confirmed by polymerase-chain-reaction assay in 30 of the 34 participants. The other 4 participants had had symptoms compatible with Covid-19 and had cohabitated with persons who were known to have Covid-19 but were not tested because of mild illness and the limited availability of testing. Most of the participants had mild illness; 2 received low-flow supplemental oxygen and leronlimab (a CCR5 antagonist), but they did not receive remdesivir. There were 20 women and 14 men. The mean age was 43 years (range, 21 to 68) (see the Supplementary Appendix, available with the full text of this letter at NEJM.org). A total of 31 of the 34 participants had two serial measurements of IgG levels, and the remaining 3 participants had three serial measurements. The first measurement was obtained at a mean of 37 days after the onset of symptoms (range, 18 to 65), and the last measurement was obtained at a mean of 86 days after the onset of symptoms (range, 44 to 119). The initial mean IgG level was 3.48 log10 ng per milliliter (range, 2.52 to 4.41). On the basis of a linear regression model that included the participants’ age and sex, the days from symptom onset to the first measurement, and the first log10 antibody level, the estimated mean change (slope) was −0.0083 log10 ng per milliliter per day (range, −0.0352 to 0.0062), which corresponds to a half-life of approximately 36 days over the observation period (Figure 1A). The 95% confidence interval for the slope was −0.0115 to −0.0050 log10 ng per milliliter per day (half-life, 26 to 60 days) (Figure 1B). The protective role of antibodies against SARS-CoV-2 is unknown, but these antibodies are usually a reasonable correlate of antiviral immunity, and anti–receptor-binding domain antibody levels correspond to plasma viral neutralizing activity. Given that early antibody decay after acute viral antigenic exposure is approximately exponential, 3 we found antibody loss that was quicker than that reported for SARS-CoV-1, 4,5 and our findings were more consistent with those of Long et al. 1 Our findings raise concern that humoral immunity against SARS-CoV-2 may not be long lasting in persons with mild illness, who compose the majority of persons with Covid-19. It is difficult to extrapolate beyond our observation period of approximately 90 days because it is likely that the decay will decelerate. 3 Still, the results call for caution regarding antibody-based “immunity passports,” herd immunity, and perhaps vaccine durability, especially in light of short-lived immunity against common human coronaviruses. Further studies will be needed to define a quantitative protection threshold and rate of decline of antiviral antibodies beyond 90 days.

SARS‐CoV‐2 Seroconversion in Humans: A Detailed Protocol for a Serological Assay, Antigen Production, and Test Setup

Daniel Stadlbauer, Fatima Amanat, Veronika Chromikova … (2020)
Abstract In late 2019, cases of atypical pneumonia were detected in China. The etiological agent was quickly identified as a betacoronavirus (named SARS‐CoV‐2), which has since caused a pandemic. Several methods allowing for the specific detection of viral nucleic acids have been established, but these only allow detection of the virus during a short period of time, generally during acute infection. Serological assays are urgently needed to conduct serosurveys, to understand the antibody responses mounted in response to the virus, and to identify individuals who are potentially immune to re‐infection. Here we describe a detailed protocol for expression of antigens derived from the spike protein of SARS‐CoV‐2 that can serve as a substrate for immunological assays, as well as a two‐stage serological enzyme‐linked immunosorbent assay (ELISA). These assays can be used for research studies and for testing in clinical laboratories. © 2020 The Authors. Current Protocols in Microbiology published by Wiley Periodicals LLC. Basic Protocol 1: Mammalian cell transfection and protein purification Basic Protocol 2: A two‐stage ELISA for high‐throughput screening of human serum samples for antibodies binding to the spike protein of SARS‐CoV‐2

Living on Three Time Scales: The Dynamics of Plasma Cell and Antibody Populations Illustrated for Hepatitis A Virus