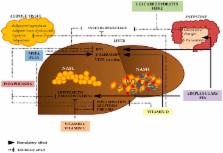 Non-alcoholic fatty liver disease (NAFLD) incorporates an extensive spectrum of histologic liver abnormalities, varying from simple triglyceride accumulation in hepatocytes non-alcoholic fatty liver (NAFL) to non-alcoholic steatohepatitis (NASH), and it is the most frequent chronic liver disease in the industrialized world. Beyond liver related complications such as cirrhosis and hepatocellular carcinoma, NAFLD is also an emerging risk factor for type 2 diabetes and cardiovascular disease. Currently, lifestyle intervention including strategies to reduce body weight and to increase regular physical activity represents the mainstay of NAFLD management. Total caloric intake plays a very important role in both the development and the treatment of NAFLD; however, apart from the caloric restriction alone, modifying the quality of the diet and modulating either the macro- or micronutrient composition can also markedly affect the clinical evolution of NAFLD, offering a more realistic and feasible treatment alternative. The aim of the present review is to summarize currently available evidence from randomized controlled trials on the effects of different nutrients including carbohydrates, lipids, protein and other dietary components, in isocaloric conditions, on NAFLD in people at high cardiometabolic risk. We also describe the plausible mechanisms by which different dietary components could modulate liver fat content.

Miriam B Vos,  Elizabeth Brunt,  D. Tiniakos (2009)
Nonalcoholic fatty liver disease (NAFLD) is recognized as the leading cause of chronic liver disease in adults and children. NAFLD encompasses a spectrum of liver injuries ranging from steatosis to steatohepatitis with or without fibrosis. Fibrosis may progress to cirrhosis and complications including hepatocellular carcinoma. Histologic findings represent the complexity of pathophysiology. NAFLD is closely associated with obesity and is most closely linked with insulin resistance; the current Western diet, high in saturated fats and fructose, plays a significant role. There are several mechanisms by which excess triglycerides are acquired and accumulate in hepatocytes. Formation of steatotic droplets may be disordered in NAFLD. Visceral adipose tissue dysfunction in obesity and insulin resistance results in aberrant cytokine expression; many cytokines have a role in liver injury in NAFLD. Cellular stress and immune reactions, as well as the endocannabinoid system, have been implicated in animal models and in some human studies.

M Maersk,  Bjørn Richelsen,  Dan B Pedersen … (2012)
The consumption of sucrose-sweetened soft drinks (SSSDs) has been associated with obesity, the metabolic syndrome, and cardiovascular disorders in observational and short-term intervention studies. Too few long-term intervention studies in humans have examined the effects of soft drinks. We compared the effects of SSSDs with those of isocaloric milk and a noncaloric soft drink on changes in total fat mass and ectopic fat deposition (in liver and muscle tissue). Overweight subjects (n = 47) were randomly assigned to 4 different test drinks (1 L/d for 6 mo): SSSD (regular cola), isocaloric semiskim milk, aspartame-sweetened diet cola, and water. The amount of intrahepatic fat and intramyocellular fat was measured with (1)H-magnetic resonance spectroscopy. Other endpoints were fat mass, fat distribution (dual-energy X-ray absorptiometry and magnetic resonance imaging), and metabolic risk factors. The relative changes between baseline and the end of 6-mo intervention were significantly higher in the regular cola group than in the 3 other groups for liver fat (132-143%, sex-adjusted mean; P < 0.01), skeletal muscle fat (117-221%; P < 0.05), visceral fat (24-31%; P < 0.05), blood triglycerides (32%; P < 0.01), and total cholesterol (11%; P < 0.01). Total fat mass was not significantly different between the 4 beverage groups. Milk and diet cola reduced systolic blood pressure by 10-15% compared with regular cola (P < 0.05). Otherwise, diet cola had effects similar to those of water. Daily intake of SSSDs for 6 mo increases ectopic fat accumulation and lipids compared with milk, diet cola, and water. Thus, daily intake of SSSDs is likely to enhance the risk of cardiovascular and metabolic diseases. This trial is registered at clinicaltrials.gov as NCT00777647.

Stefano Bellentani (2017)
The increase in Non-alcoholic Fatty Liver Disease (NAFLD) and the imminent disappearance of chronic viral hepatitis thanks to new and effective therapies is motivating hepatologists to change their clinical approach to chronic liver disease. NAFLD-cirrhosis or NAFLD-Hepatocellular Carcinoma (HCC) are now the second cause of liver transplantation in the USA. This short-review is focused to the epidemiology of NAFLD/Non-alchoholic Steatohepatitis (NASH), including the definition of this disease which should be revised as well discussing the prevalence, risk factors for progression, natural history and mortality. NAFLD is considered to be the hepatic manifestation of the metabolic syndrome (MS). It affects 25-30% of the general population and the risk factors are almost identical to those of MS. The natural history involves either the development of cardiovascular diseases or cirrhosis and HCC. HCC can also develop in NASH in the absence of cirrhosis (45% of cases). We conclude that an international consensus conference on the definition, natural history, policies of surveillance and new pharmacological treatments of NAFLD and NASH is urgently needed.