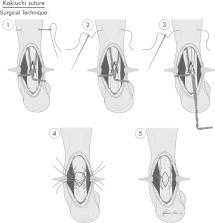 Twenty fresh bovine Achilles tendons were obtained. Ten preparations were randomly assigned to each of two different groups: group A (10 specimens) sutured by IHM technique, and group B (10 specimens) sutured by Kakiuchi technique. Each construct was mounted and fixed on a tensile testing machine. Static preconditioning of 50 N was applied for 5 min as initial tensioning to stabilize the mechanical properties of the graft, then a load to failure test was performed at crosshead speed of 500 mm/min.

Ten specimens were tested for each group. The mean UFL was 228.6 ± 98.6 N in the IHM suture group and 96.57 ± 80.1 N in the Kakiuchi suture group. Statistical analysis showed a significant difference ( p < 0.05) with better UFL in the IHM group. In both groups, the failure mode registered in each specimen was suture breakage (rupture of suture thread).

Early motion of the ankle after operative treatment of a rupture of the Achilles tendon. A prospective, randomized clinical and radiographic study.

Uffe Mortensen,  Lilli Ø Skov,  Leif P Jensen (1999)
Different regimens of early motion of the ankle after operative treatment of a ruptured Achilles tendon have been suggested since the late 1980s. However, as far as we know, no controlled studies comparing these regimens with conventional immobilization in a cast have been reported. In a prospective study, seventy-one patients who had an acute rupture of the Achilles tendon were randomized to either conventional postoperative management with a cast for eight weeks or early restricted motion of the ankle in a below-the-knee brace for six weeks. The brace was modified with an elastic band on the posterior surface, in a manner similar to the principle of Kleinert traction. Metal markers were placed in the tendon, and the separation between them was measured on serial radiographs during the first twelve weeks postoperatively. The patients were assessed clinically when the cast or brace was removed, at twelve weeks postoperatively, and at a median of sixteen months postoperatively. The separation between the markers at twelve weeks postoperatively was nearly identical in the two groups, with a median separation of 11.5 millimeters (range, zero to thirty-three millimeters) in the patients managed with early motion of the ankle and nine millimeters (range, one to forty-one millimeters) in the patients managed with a cast. The separation was primarily correlated with the initial tautness of the repair (r[S] = 0.45). No patient had excessive lengthening of the tendon. The patients managed with early motion had a smaller initial loss in the range of motion, and they returned to work and sports activities sooner than those managed with a cast. Furthermore, there were fewer visible adhesions between the repaired tendon and the skin in the patients managed with early motion, and these patients were subjectively more satisfied with the overall result. The patients in both groups recovered a median of 89 percent of strength of plantar flexion compared with that of the noninjured limb, as measured with an isometric strain-gauge at 15 degrees of dorsiflexion. The heel-rise index was similar for both groups: 0.88 for the patients managed with early motion and 0.89 for those managed with a cast. Early restricted motion appears to shorten the time needed for rehabilitation. There were no complications related to early motion in these patients. However, early unloaded exercises did not prevent muscle atrophy.

Operative versus nonoperative treatment of Achilles tendon rupture. A prospective randomized study and review of the literature.

R Cetti,  S E Christensen,  R Ejsted … (2015)
One hundred eleven patients with acute rupture of the Achilles tendon were included in a prospective trial and randomly assigned to groups for operative (56 patients) or nonoperative (55 patients) treatment. All of the patients were followed with clinic evaluations at 4 months and 1 year after the rupture. The major complications in the operative treatment group were three reruptures and two deep infections as compared with seven reruptures, one second rerupture, and one extreme residual lengthening of the tendon in the nonoperative group. There were fewer minor complications in the nonoperative group than in the operative group. The operatively treated patients had a significantly higher rate of resuming sports activities at the same level, a lesser degree of calf atrophy, better ankle movement, and fewer complaints 1 year after the accident. The conclusion we reached through this randomized prospective study is that operative treatment of ruptured Achilles tendons is preferable, but nonoperative treatment is an acceptable alternative.