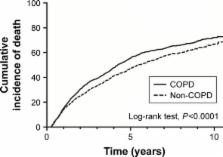 The aim of this study was to investigate the impact of COPD on the outcomes of patients with advanced chronic kidney disease (CKD).

All patients with advanced CKD from 2000 to 2010 were identified from the Taiwanese National Health Insurance Research Database. Associations between COPD and the risk of long-term dialysis and all-cause mortality were assessed.

Jia Liu,  Yu Chen,  Wen-Lin Kuo … (2014)
The benefit of using a renin-angiotensin-aldosterone system blocker such as an angiotensin-converting enzyme inhibitor (ACEI) or an angiotensin II receptor blocker (ARB) for patients with advanced chronic kidney disease (CKD) remains undetermined. To assess the effectiveness and safety of ACEI/ARB use for advanced predialysis CKD in patients with hypertension and anemia. DESIGN Prospective cohort study. Taiwan. From January 1, 2000, through June 30, 2009, we selected 28 497 hypertensive adult patients with CKD. Serum creatinine levels were greater than 6 mg/dL, hematocrit levels were less than 28%, and patients were treated with erythropoiesis-stimulating agents. Users (n = 14,117) and nonusers (n = 14,380) of ACEIs/ARBs. We used Cox proportional hazards regression models to estimate hazard ratios (HRs) for commencement of long-term dialysis and all-cause mortality for ACRI/ARB users vs nonusers. In a median follow-up of 7 months, 20,152 patients (70.7%) required long-term dialysis and 5696 (20.0%) died before progression to end-stage renal disease requiring dialysis. Use of ACEIs/ARBs was associated with a lower risk for long-term dialysis (HR, 0.94 [95% CI, 0.91-0.97]) and the composite outcome of long-term dialysis or death (0.94 [0.92-0.97]). The renal benefit of ACEI/ARB use was consistent across most patient subgroups, as was that of ACEI or ARB monotherapy. Compared with nonusers, the ACEI/ARB users had a higher hyperkalemia-associated hospitalization rate, but the risk of predialysis mortality caused by hyperkalemia was not significantly increased (HR, 1.03 [95% CI, 0.92-1.16]; P = .30). Patients with stable hypertension and advanced CKD who receive therapy with ACEIs/ARBs exhibit an association with lower risk for long-term dialysis or death by 6%. This benefit does not increase the risk of all-cause mortality.

Sarah Landis,  Hana Muellerova,  David Mannino … (2014)
Purpose The Continuing to Confront COPD International Patient Survey aimed to estimate the prevalence and burden of COPD globally and to update findings from the Confronting COPD International Survey conducted in 1999–2000. Materials and methods Chronic obstructive pulmonary disease (COPD) patients in 12 countries worldwide were identified through systematic screening of population samples. Telephone and face-to-face interviews were conducted between November 2012 and May 2013 using a structured survey that incorporated validated patient-reported outcome instruments. Eligible patients were adults aged 40 years and older who were taking regular respiratory medications or suffered with chronic respiratory symptoms and reported either 1) a physician diagnosis of COPD/emphysema, 2) a physician diagnosis of chronic bronchitis, or 3) a symptom-based definition of chronic bronchitis. The burden of COPD was measured with the COPD Assessment Test (CAT) and the modified Medical Research Council (mMRC) Dyspnea Scale. Results Of 106,876 households with at least one person aged ≥40 years, 4,343 respondents fulfilled the case definition of COPD and completed the full survey. COPD prevalence ranged from 7% to 12%, with most countries falling within the range of 7%–9%. In all countries, prevalence increased with age, and in all countries except the US was greater among men (range 6%–14%) than among women (range 5%–11%). A significant disease burden was observed when considering COPD symptoms or health status, and showed wide variations across countries. Prevalence of moderate-to-severe dyspnea (mMRC scale ≥2) ranged from 27% to 61%, and mean CAT score ranged from 16.0 to 24.8, indicating medium-to-high impairment. Conclusion This survey, representing 12 countries, showed similar rates of estimated COPD prevalence across countries that were higher than those reported a decade ago in the original Confronting COPD International Survey. A significant burden of COPD was demonstrated by symptoms and health care-resource use, similar to that reported in the original survey.