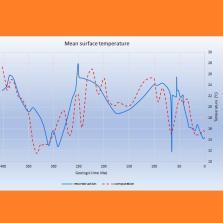 While presenting simplified quantifications on the natural climate (change) processes to enhance reproducibility and communication to the broader audience, the study results are unique in many respects.

Pencil-and-paper climate modelling is extracted from the comprehensive previous research on the inherently complex natural processes. A major goal is to mediate between general scientific knowledge and the wide-spread scepticism by identifying the driving forces, seeking simple descriptions, uncovering reproducibility, and thus contributing to transparency. The results of the shortcut model are in outstanding agreement with earlier measurement data and simulation studies. Two observations are fundamentally novel requiring scrutinization by the natural sciences community: (1) near-proportionality of atmospheric infrared absorption to particle densities and (2), temperature impact from human energy consumption. Independently, the presented framework allows for straightforward climate projections and risk assessment. As result, future economic growth is demanded to zero, even in a renewables (Green Growth) world.