Expanding the CRISPR Toolbox in Zebrafish for Studying Development and Disease 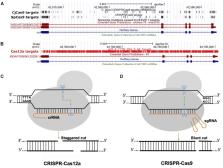 The study of model organisms has revolutionized our understanding of the mechanisms underlying normal development, adult homeostasis, and human disease. Much of what we know about gene function in model organisms (and its application to humans) has come from gene knockouts: the ability to show analogous phenotypes upon gene inactivation in animal models. The zebrafish ( Danio rerio) has become a popular model organism for many reasons, including the fact that it is amenable to various forms of genetic manipulation. The RNA-guided CRISPR/Cas9-mediated targeted mutagenesis approaches have provided powerful tools to manipulate the genome toward developing new disease models and understanding the pathophysiology of human diseases. CRISPR-based approaches are being used for the generation of both knockout and knock-in alleles, and also for applications including transcriptional modulation, epigenome editing, live imaging of the genome, and lineage tracing. Currently, substantial effort is being made to improve the specificity of Cas9, and to expand the target coverage of the Cas9 enzymes. Novel types of naturally occurring CRISPR systems [Cas12a (Cpf1); engineered variants of Cas9, such as xCas9 and SpCas9-NG], are being studied and applied to genome editing. Since the majority of pathogenic mutations are single point mutations, development of base editors to convert C:G to T:A or A:T to G:C has further strengthened the CRISPR toolbox. In this review, we provide an overview of the increasing number of novel CRISPR-based tools and approaches, including lineage tracing and base editing.

Woong Hwang,  Yanfang Fu,  Deepak Reyon … (2013)
Clustered regularly interspaced short palindromic repeats (CRISPR)/CRISPR-associated (Cas) systems have evolved in bacteria and archaea as a defense mechanism to silence foreign nucleic acids of viruses and plasmids. Recent work has shown that bacterial type II CRISPR systems can be adapted to create guide RNAs (gRNAs) capable of directing site-specific DNA cleavage by the Cas9 nuclease in vitro. Here we show that this system can function in vivo to induce targeted genetic modifications in zebrafish embryos with efficiencies comparable to those obtained using ZFNs and TALENs for the same genes. RNA-guided nucleases robustly enabled genome editing at 9 of 11 different sites tested, including two for which TALENs previously failed to induce alterations. These results demonstrate that programmable CRISPR/Cas systems provide a simple, rapid, and highly scalable method for altering genes in vivo, opening the door to using RNA-guided nucleases for genome editing in a wide range of organisms.

Isaac B. Hilton,  Anthony M. D’Ippolito,  Christopher M. Vockley … (2015)
Technologies that facilitate the targeted manipulation of epigenetic marks could be used to precisely control cell phenotype or interrogate the relationship between the epigenome and transcriptional control. Here we have generated a programmable acetyltransferase based on the CRISPR/Cas9 gene regulation system, consisting of the nuclease-null dCas9 protein fused to the catalytic core of the human acetyltransferase p300. This fusion protein catalyzes acetylation of histone H3 lysine 27 at its target sites, corresponding with robust transcriptional activation of target genes from promoters, proximal enhancers, and distal enhancers. Gene activation by the targeted acetyltransferase is highly specific across the genome. In contrast to conventional dCas9-based activators, the acetyltransferase effectively activates genes from enhancer regions and with individual guide RNAs. The core p300 domain is also portable to other programmable DNA-binding proteins. These results support targeted acetylation as a causal mechanism of transactivation and provide a new robust tool for manipulating gene regulation.

Edited by: Gokhan Dalgin, The University of Chicago, United States