Access to and Payment for Office-Based Buprenorphine Treatment in Ohio 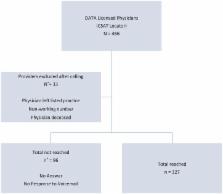 Office-based opiate agonist therapy has dramatically expanded access to medication-assisted treatment over the past decade but has also led to increased buprenorphine diversion.

Our study sought to characterize physicians who participate in office-based therapy (OBT) to assess patient access to OBT in Ohio 10 years after its introduction.

Of the 466 listed physicians, 327 (70.2%) practice representatives were reached for interview. Thirty-three physicians were excluded, with a true response rate of 75.5%. In total, 80.7% of providers reached were active OBT prescribers. Of these, 52.7% accepted insurance for OBT, 20.8% accepted insurance for non-OBT services but not for OBT, and 26.5% did not accept insurance for any services. Practices who did not accept insurance were more likely among dedicated addiction clinics located outside of Ohio’s 6 major cities. Practices who normally accepted insurance but did not for OBT services were more likely in urban locations and were not associated with dedicated addiction practices. Neither business practice was associated with physician specialty

Access to OBT in Ohio is far lower than what the 466 listed physicians suggests. Nearly 1 in 5 of those physicians are not active OBT prescribers, and 1 in 2 active prescribers do not accept insurance for OBT. Further research is needed to determine whether practices who do not accept insurance provide care consistent with CSAT guidelines and whether such practice patterns contribute to buprenorphine diversion.

Cynthia L Arfken,  Chris-Ellyn Johanson,  Salvatore di Menza … (2010)
Office-based treatment of opioid dependence with buprenorphine has the potential to expand treatment capacity in the United States. However, nationally, little is known about the number, characteristics, and experiences of physicians certified to prescribe buprenorphine. Moreover, little is known about the impact of easing federal regulations on the number of patients a physician is allowed to treat concurrently. To address these questions, surveys of national samples of physicians certified to prescribe buprenorphine (2004-2008) were analyzed (N = 6,892). There has been a continual increase in the number of physicians certified to prescribe buprenorphine, increase in the mean number of patients treated by physicians, and decrease in patients turned away, coinciding temporally with easing of federal regulations. In addition, most physicians prescribed buprenorphine outside of traditional treatment settings. The U.S. experiment in expanding Schedule III-V medications for opioid dependence to physicians outside of formal substance abuse treatment facilities appears to have resulted in expanded capacity.

Diversion and abuse of buprenorphine: findings from national surveys of treatment patients and physicians.

Illicit use of buprenorphine in a community sample of young adult non-medical users of pharmaceutical opioids.

Raminta Daniulaityte,  Russel Falck,  Robert G. Carlson (2012)
There is growing evidence about illicit use of buprenorphine in the U.S. The study aims to: (1) identify prevalence and predictors of illicit buprenorphine use in a community sample of 396 young adult (18-23 years old) non-medical users of pharmaceutical opioids and (2) describe knowledge, attitudes and behaviors linked to illicit buprenorphine use as reported by a qualitative sub-sample (n=51).