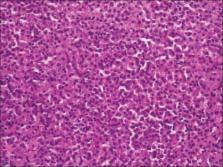 Solitary plasmacytoma of base of skull is a rare disease. It presents with headache, swelling, and other vague symptoms. Systemic work-up to rule out multiple myeloma is necessary. Radiotherapy is the treatment of choice. We, here, present a case of solitary plasmacytoma of base of skull in right temporal bone in a 50-year-old female treated with surgery and radiotherapy.

M Dimopoulos, L Moulopoulos, Nikolaos Maniatis … (2000)
Most patients with multiple myeloma (MM) present with symptoms, have evidence of generalized disease, and require chemotherapy promptly to reduce the malignant clone. Some patients present with a local symptom from a single plasmacytoma but no myeloma elsewhere. Such patients usually become free of symptoms after local radiotherapy. In patients with MM without symptoms, the diagnosis is made on the basis of screening laboratory tests. In patients with either solitary plasmacytoma of bone or asymptomatic MM, systemic treatment should be deferred until there is evidence of disease progression.

L-Y Shih, P Dunn, Winnie W. M. Leung … (1995)
The clinical features and response to therapy of 32 Chinese patients with localised plasmacytoma are presented, and a comparison between extramedullary plasmacytoma (EMP) and solitary plasmacytoma of bone (SPB) is made. Twenty-two patients had SPB and ten had EMP, accounting for 9% of all of our plasma cell neoplasms. Both groups had a male predominance with a median age of 54 years for SPB and 63 years for EMP. The common sites of SPB included vertebral bodies (15) and the skull (4). Most EMPs occurred in the oronasopharynx (6) and paranasal sinuses (2). An M-protein was detected in eight patients with SPB and in six with EMP. Seventeen patients with SPB and seven with EMP received radiation therapy, and all achieved initial local control. The pattern of failure in 22 patients with SPB manifested as local recurrence in two, multiple bone metastases without bone marrow plasmacytosis in two, multiple EMP progression in two, and development of multiple myeloma (MM) in one. There were two local recurrences, one further solitary bone involvement and one MM conversion in the EMP group. Local recurrence or dissemination was associated with the appearance of M-protein or an increase in the M-protein level in both groups. There was no significant difference in M-protein status or incidence and patterns of failure between the two groups. Patients with EMP had a more favourable overall survival than those with SPB (P = 0.03). The 5 year disease-free survival rate was 79% for EMP and 58% for SPB (P = 0.53). Patients aged less than 60 years had a better overall survival in the SPB group, but location of tumour, presence of M-protein, radiation dose and chemotherapy did not influence prognosis in either group. Our results indicate that adequate local therapy can result in long-term survival with a low frequency of MM progression for patients with localised plasmacytomas, and both EMP and SPB appear to be similar in terms of frequency and patterns of failure.