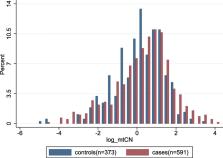 Although human papillomavirus (HPV) infection has been regarded as the cause of cervical cancer in over 99% of cases, only a small fraction of HPV-infected women develop this malignancy. Emerging evidence suggests that alterations of mitochondrial DNA copy number (mtCN) may contribute to carcinogenesis. However, the relationship between mtCN and cervical cancer remains undetermined.

The current study included 591 cervical cancer cases and 373 cancer-free controls, all of whom were infected with high-risk HPV. Relative mtCN in cervical cancer exfoliated cells was measured by qRT-PCR assays, and logistic regression analysis was performed to compute odds ratios (ORs) and 95% confidence intervals (CIs). Interaction between mtCN and HPV types was assessed by using the Wald test in logistic regression models.

Satoaki Matoba,  Ju-Gyeong Kang,  Willmar Patino … (2006)
The energy that sustains cancer cells is derived preferentially from glycolysis. This metabolic change, the Warburg effect, was one of the first alterations in cancer cells recognized as conferring a survival advantage. Here, we show that p53, one of the most frequently mutated genes in cancers, modulates the balance between the utilization of respiratory and glycolytic pathways. We identify Synthesis of Cytochrome c Oxidase 2 (SCO2) as the downstream mediator of this effect in mice and human cancer cell lines. SCO2 is critical for regulating the cytochrome c oxidase (COX) complex, the major site of oxygen utilization in the eukaryotic cell. Disruption of the SCO2 gene in human cancer cells with wild-type p53 recapitulated the metabolic switch toward glycolysis that is exhibited by p53-deficient cells. That SCO2 couples p53 to mitochondrial respiration provides a possible explanation for the Warburg effect and offers new clues as to how p53 might affect aging and metabolism.

F. Yakes,  Johannes van Goudoever (1997)
A significant amount of reactive oxygen species (ROS) is generated during mitochondrial oxidative phosphorylation. Several studies have suggested that mtDNA may accumulate more oxidative DNA damage relative to nuclear DNA. This study used quantitative PCR to examine the formation and repair of hydrogen peroxide-induced DNA damage in a 16.2-kb mitochondrial fragment and a 17.7-kb fragment flanking the beta-globin gene. Simian virus 40-transformed fibroblasts treated with 200 microM hydrogen peroxide for 15 or 60 min exhibited 3-fold more damage to the mitochondrial genome compared with the nuclear fragment. Following a 60-min treatment, damage to the nuclear fragment was completely repaired within 1.5 hr, whereas no DNA repair in the mitochondrion was observed. Mitochondrial function, as assayed by 3-(4,5-dimethylthiazol-2-yl)-2,5-diphenyl tetrazolium bromide reduction, also showed a sharp decline. These cells displayed arrested-cell growth, large increases in p21 protein levels, and morphological changes consistent with apoptosis. In contrast, when hydrogen peroxide treatments were limited to 15 min, mtDNA damage was repaired with similar kinetics as the nuclear fragment, mitochondrial function was restored, and cells resumed division within 12 hr. These results indicate that mtDNA is a critical cellular target for ROS. A model is presented in which chronic ROS exposure, found in several degenerative diseases associated with aging, leads to decreased mitochondrial function, increased mitochondrial-generated ROS, and persistent mitochondrial DNA damage. Thus persistent mitochondrial DNA damage may serve as a useful biomarker for ROS-associated diseases.

Claes M. Gustafsson,  Maria Falkenberg,  Nils-Göran Larsson (2016)
Mammalian mitochondrial DNA (mtDNA) encodes 13 proteins that are essential for the function of the oxidative phosphorylation system, which is composed of four respiratory-chain complexes and adenosine triphosphate (ATP) synthase. Remarkably, the maintenance and expression of mtDNA depend on the mitochondrial import of hundreds of nuclear-encoded proteins that control genome maintenance, replication, transcription, RNA maturation, and mitochondrial translation. The importance of this complex regulatory system is underscored by the identification of numerous mutations of nuclear genes that impair mtDNA maintenance and expression at different levels, causing human mitochondrial diseases with pleiotropic clinical manifestations. The basic scientific understanding of the mechanisms controlling mtDNA function has progressed considerably during the past few years, thanks to advances in biochemistry, genetics, and structural biology. The challenges for the future will be to understand how mtDNA maintenance and expression are regulated and to what extent direct intramitochondrial cross talk between different processes, such as transcription and translation, is important.