Vibrio cholerae genomic diversity within and between patients 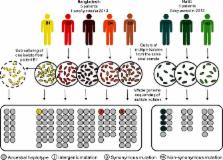 Cholera is a severe, water-borne diarrhoeal disease caused by toxin-producing strains of the bacterium Vibrio cholerae. Comparative genomics has revealed ‘waves’ of cholera transmission and evolution, in which clones are successively replaced over decades and centuries. However, the extent of V. cholerae genetic diversity within an epidemic or even within an individual patient is poorly understood. Here, we characterized V. cholerae genomic diversity at a micro-epidemiological level within and between individual patients from Bangladesh and Haiti. To capture within-patient diversity, we isolated multiple (8 to 20) V. cholerae colonies from each of eight patients, sequenced their genomes and identified point mutations and gene gain/loss events. We found limited but detectable diversity at the level of point mutations within hosts (zero to three single nucleotide variants within each patient), and comparatively higher gene content variation within hosts (at least one gain/loss event per patient, and up to 103 events in one patient). Much of the gene content variation appeared to be due to gain and loss of phage and plasmids within the V. cholerae population, with occasional exchanges between V. cholerae and other members of the gut microbiota. We also show that certain intra-host variants have phenotypic consequences. For example, the acquisition of a Bacteroides plasmid and non-synonymous mutations in a sensor histidine kinase gene both reduced biofilm formation, an important trait for environmental survival. Together, our results show that V. cholerae is measurably evolving within patients, with possible implications for disease outcomes and transmission dynamics.

Trisheeta Hasan,  Gordon Choi,  Jongsik Chun … (2009)
Vibrio cholerae, the causative agent of cholera, is a bacterium autochthonous to the aquatic environment, and a serious public health threat. V. cholerae serogroup O1 is responsible for the previous two cholera pandemics, in which classical and El Tor biotypes were dominant in the sixth and the current seventh pandemics, respectively. Cholera researchers continually face newly emerging and reemerging pathogenic clones carrying diverse combinations of phenotypic and genotypic properties, which significantly hampered control of the disease. To elucidate evolutionary mechanisms governing genetic diversity of pandemic V. cholerae, we compared the genome sequences of 23 V. cholerae strains isolated from a variety of sources over the past 98 years. The genome-based phylogeny revealed 12 distinct V. cholerae lineages, of which one comprises both O1 classical and El Tor biotypes. All seventh pandemic clones share nearly identical gene content. Using analogy to influenza virology, we define the transition from sixth to seventh pandemic strains as a "shift" between pathogenic clones belonging to the same O1 serogroup, but from significantly different phyletic lineages. In contrast, transition among clones during the present pandemic period is characterized as a "drift" between clones, differentiated mainly by varying composition of laterally transferred genomic islands, resulting in emergence of variants, exemplified by V. cholerae O139 and V. cholerae O1 El Tor hybrid clones. Based on the comparative genomics it is concluded that V. cholerae undergoes extensive genetic recombination via lateral gene transfer, and, therefore, genome assortment, not serogroup, should be used to define pathogenic V. cholerae clones.

Sandrine Borgeaud,  Lisa Metzger,  Tiziana Scrignari … (2015)
Natural competence for transformation is a common mode of horizontal gene transfer and contributes to bacterial evolution. Transformation occurs through the uptake of external DNA and its integration into the genome. Here we show that the type VI secretion system (T6SS), which serves as a predatory killing device, is part of the competence regulon in the naturally transformable pathogen Vibrio cholerae. The T6SS-encoding gene cluster is under the positive control of the competence regulators TfoX and QstR and is induced by growth on chitinous surfaces. Live-cell imaging revealed that deliberate killing of nonimmune cells via competence-mediated induction of T6SS releases DNA and makes it accessible for horizontal gene transfer in V. cholerae.

All supporting data, code and protocols have been provided within the article or through supplementary data files. Supplementary material is available with the online version of this article.