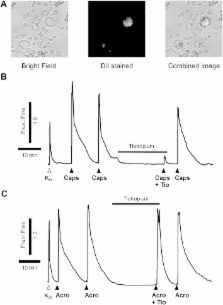 Journal: The Journal of Allergy and Clinical Immunology

Recent studies have suggested that the long-acting muscarinic receptor antagonist tiotropium, a drug widely prescribed for its bronchodilator activity in patients with chronic obstructive pulmonary disease and asthma, improves symptoms and attenuates cough in preclinical and clinical tussive agent challenge studies. The mechanism by which tiotropium modifies tussive responses is not clear, but an inhibition of vagal tone and a consequent reduction in mucus production from submucosal glands and bronchodilation have been proposed.

The aim of this study was to investigate whether tiotropium can directly modulate airway sensory nerve activity and thereby the cough reflex.

For the first time, we have shown that tiotropium inhibits neuronal TRPV1-mediated effects through a mechanism unrelated to its anticholinergic activity. We speculate that some of the clinical benefit associated with taking tiotropium (eg, in symptom control) could be explained through this proposed mechanism of action.

Kathryn Evans,  Erin S R Lashinger,  T C Westfall … (2008)
The transient receptor potential (TRP) vanilloid 4 (TRPV4) member of the TRP superfamily has recently been implicated in numerous physiological processes. In this study, we describe a small molecule TRPV4 channel activator, (N-((1S)-1-{[4-((2S)-2-{[(2,4-dichlorophenyl)sulfonyl]amino}-3-hydroxypropanoyl)-1-piperazinyl]carbonyl}-3-methylbutyl)-1-benzothiophene-2-carboxamide (GSK1016790A), which we have used as a valuable tool in investigating the role of TRPV4 in the urinary bladder. GSK1016790A elicited Ca2+ influx in mouse and human TRPV4-expressing human embryonic kidney (HEK) cells (EC50 values of 18 and 2.1 nM, respectively), and it evoked a dose-dependent activation of TRPV4 whole-cell currents at concentrations above 1 nM. In contrast, the TRPV4 activator 4alpha-phorbol 12,13-didecanoate (4alpha-PDD) was 300-fold less potent than GSK1016790A in activating TRPV4 currents. TRPV4 mRNA was detected in urinary bladder smooth muscle (UBSM) and urothelium of TRPV4+/+ mouse bladders. Western blotting and immunohistochemistry demonstrated protein expression in both the UBSM and urothelium that was absent in TRPV4-/- bladders. TRPV4 activation with GSK1016790A contracted TRPV4+/+ mouse bladders in vitro, both in the presence and absence of the urothelium, an effect that was undetected in TRPV4-/- bladders. Consistent with the effects on TRPV4 HEK whole-cell currents, 4alpha-PDD demonstrated a weak ability to contract bladder strips compared with GSK1016790A. In vivo, urodynamics in TRPV4+/+ and TRPV4-/- mice revealed an enhanced bladder capacity in the TRPV4-/- mice. Infusion of GSK1016790A into the bladders of TRPV4+/+ mice induced bladder overactivity with no effect in TRPV4-/- mice. Overall TRPV4 plays an important role in urinary bladder function that includes an ability to contract the bladder as a result of the expression of TRPV4 in the UBSM.

Muscarinic receptor signaling in the pathophysiology of asthma and COPD

Reinoud Gosens,  Johan Zaagsma,  Herman Meurs … (2006)
Anticholinergics are widely used for the treatment of COPD, and to a lesser extent for asthma. Primarily used as bronchodilators, they reverse the action of vagally derived acetylcholine on airway smooth muscle contraction. Recent novel studies suggest that the effects of anticholinergics likely extend far beyond inducing bronchodilation, as the novel anticholinergic drug tiotropium bromide can effectively inhibit accelerated decline of lung function in COPD patients. Vagal tone is increased in airway inflammation associated with asthma and COPD; this results from exaggerated acetylcholine release and enhanced expression of downstream signaling components in airway smooth muscle. Vagally derived acetylcholine also regulates mucus production in the airways. A number of recent research papers also indicate that acetylcholine, acting through muscarinic receptors, may in part regulate pathological changes associated with airway remodeling. Muscarinic receptor signalling regulates airway smooth muscle thickening and differentiation, both in vitro and in vivo. Furthermore, acetylcholine and its synthesizing enzyme, choline acetyl transferase (ChAT), are ubiquitously expressed throughout the airways. Most notably epithelial cells and inflammatory cells generate acetylcholine, and express functional muscarinic receptors. Interestingly, recent work indicates the expression and function of muscarinic receptors on neutrophils is increased in COPD. Considering the potential broad role for endogenous acetylcholine in airway biology, this review summarizes established and novel aspects of muscarinic receptor signaling in relation to the pathophysiology and treatment of asthma and COPD.