Surveillance in Patients With Barrett's Esophagus for Early Detection of Esophageal Adenocarcinoma: A Systematic Review and Meta-Analysis 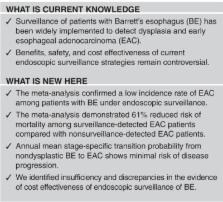 Although endoscopic surveillance of patients with Barrett's esophagus (BE) has been widely implemented for early detection of esophageal adenocarcinoma (EAC), its justification has been debated. This systematic review aimed to evaluate benefits, safety, and cost effectiveness of surveillance for patients with BE.

MEDLINE, EMBASE, EconLit, Scopus, Cochrane, and CINAHL were searched for published human studies that examined screening practices, benefits, safety, and cost effectiveness of surveillance among patients with BE. Reviewers independently reviewed eligible full-text study articles and conducted data extraction and quality assessment, with disagreements resolved by consensus. Random effects meta-analyses were performed to assess the incidence of EAC, EAC/high-grade dysplasia (HGD), and annual stage-specific transition probabilities detected among BE patients under surveillance, and relative risk of mortality among EAC patients detected during surveillance compared with those not under surveillance.

A total of 51 studies with 11,028 subjects were eligible; the majority were of high quality based on the Newcastle–Ottawa quality scale. Among BE patients undergoing endoscopic surveillance, pooled EAC incidence per 1,000 person-years of surveillance follow-up was 5.5 (95% confidence interval (CI): 4.2–6.8) and pooled EAC/HGD incidence was 7.7 (95% CI: 5.7–9.7). Pooled relative mortality risk among surveillance-detected EAC patients compared with nonsurveillance-detected EAC patients was 0.386 (95% CI: 0.242–0.617). Pooled annual stage-specific transition probabilities from nondysplastic BE to low-grade dysplasia, high-grade dysplasia, and EAC were 0.019, 0.003, and 0.004, respectively. There was, however, insufficient scientific evidence on safety and cost effectiveness of surveillance for BE patients.

Our findings confirmed a low incidence rate of EAC among BE patients undergoing surveillance and a reduction in mortality by 61% among those who received regular surveillance and developed EAC. Because of knowledge gaps, it is important to assess safety of surveillance and health-care resource use and costs to supplement existing evidence and inform a future policy decision for surveillance programs.

Lidia Arends,  Paul A. C. Duijn,  Theo Stijnen (2002)
This tutorial on advanced statistical methods for meta-analysis can be seen as a sequel to the recent Tutorial in Biostatistics on meta-analysis by Normand, which focused on elementary methods. Within the framework of the general linear mixed model using approximate likelihood, we discuss methods to analyse univariate as well as bivariate treatment effects in meta-analyses as well as meta-regression methods. Several extensions of the models are discussed, like exact likelihood, non-normal mixtures and multiple endpoints. We end with a discussion about the use of Bayesian methods in meta-analysis. All methods are illustrated by a meta-analysis concerning the efficacy of BCG vaccine against tuberculosis. All analyses that use approximate likelihood can be carried out by standard software. We demonstrate how the models can be fitted using SAS Proc Mixed. Copyright 2002 John Wiley & Sons, Ltd.

The incidence of esophageal cancer and high-grade dysplasia in Barrett's esophagus: a systematic review and meta-analysis.

Updated guidelines for the diagnosis, surveillance, and therapy of Barrett's esophagus.

Clinical and Translational Gastroenterology is an open-access journal published by Nature Publishing Group. This work is licensed under a Creative Commons Attribution-NonCommercial-NoDerivs 4.0 International License. The images or other third party material in this article are included in the article's Creative Commons license, unless indicated otherwise in the credit line; if the material is not included under the Creative Commons license, users will need to obtain permission from the license holder to reproduce the material. To view a copy of this license, visit http://creativecommons.org/licenses/by-nc-nd/4.0/