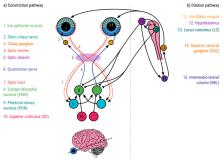 Pupils respond to three distinct kinds of stimuli: they constrict in response to brightness (the pupil light response), constrict in response to near fixation (the pupil near response), and dilate in response to increases in arousal and mental effort, either triggered by an external stimulus or spontaneously. In this review, I describe these three pupil responses, how they are related to high-level cognition, and the neural pathways that control them. I also discuss the functional relevance of pupil responses, that is, how pupil responses help us to better see the world. Although pupil responses likely serve many functions, not all of which are fully understood, one important function is to optimize vision either for acuity (small pupils see sharper) and depth of field (small pupils see sharply at a wider range of distances), or for sensitivity (large pupils are better able to detect faint stimuli); that is, pupils change their size to optimize vision for a particular situation. In many ways, pupil responses are similar to other eye movements, such as saccades and smooth pursuit: like these other eye movements, pupil responses have properties of both reflexive and voluntary action, and are part of active visual exploration.

European Yearbook of the History of Psychology

The pupil as a measure of emotional arousal and autonomic activation.

Margaret M Bradley, Laura Miccoli, Miguel A. Escrig … (2008)
Pupil diameter was monitored during picture viewing to assess effects of hedonic valence and emotional arousal on pupillary responses. Autonomic activity (heart rate and skin conductance) was concurrently measured to determine whether pupillary changes are mediated by parasympathetic or sympathetic activation. Following an initial light reflex, pupillary changes were larger when viewing emotionally arousing pictures, regardless of whether these were pleasant or unpleasant. Pupillary changes during picture viewing covaried with skin conductance change, supporting the interpretation that sympathetic nervous system activity modulates these changes in the context of affective picture viewing. Taken together, the data provide strong support for the hypothesis that the pupil's response during affective picture viewing reflects emotional arousal associated with increased sympathetic activity.

Heiner Deubel, Werner X. Schneider (1996)
The spatial interaction of visual attention and saccadic eye movements was investigated in a dual-task paradigm that required a target-directed saccade in combination with a letter discrimination task. Subjects had to saccade to locations within horizontal letter strings left and right of a central fixation cross. The performance in discriminating between the symbols "E" and "E", presented tachistoscopically before the saccade within the surrounding distractors was taken as a measure of visual attention. The data show that visual discrimination is best when discrimination stimulus and saccade target refer to the same object; discrimination at neighboring items is close to chance level. Also, it is not possible, in spite of prior knowledge of discrimination target position, to direct attention to the discrimination target while saccading to a spatially close saccade target. The data strongly argue for an obligatory and selective coupling of saccade programming and visual attention to one common target object. The results favor a model in which a single attentional mechanism selects objects for perceptual processing and recognition, and also provides the information necessary for motor action.