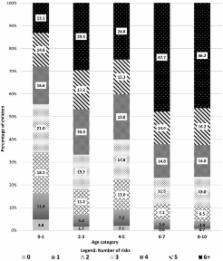 ScienceOpenPublisherPMC
Bookmark
There is no author summary for this article yet. Authors can add summaries to their articles on ScienceOpen to make them more accessible to a non-specialist audience.
Policy Points:

Mental illness is a high source of disease burden across the globe. Mental illness is now understood as largely developmental, with its genesis at least in part in adverse childhood experiences. We sought to estimate the prevalence of childhood risks for poor mental health in Indigenous Australian children, noting that Indigenous Australians by virtue of their history of traumatic colonization and dispossession, child removal, and racism are potentially at greater risk.

We conducted a descriptive study of the modifiable risks and adversities associated with mental illness in Australian Indigenous children (infancy to 10 years), using data from the Longitudinal Study of Indigenous Children (LSIC), a cohort of 1,671 infants enrolled in 2008 and followed up annually. Risk factors of interest were identified from a comprehensive literature review of childhood determinants of adult mental illness by Fryers and Brugha (2013). The age‐category prevalence of individual risks and a multiple‐risk score were computed using data extracted from 6 waves of LSIC.

The analytic data comprised 8,378 person‐observations from the first 6 waves. Children in LSIC experience high rates of adversities. In utero, nearly 50% were exposed to smoking and 22% to alcohol. As infants, 42.5% were not living with both birth parents. Over two‐thirds of survey children were in households that had experienced, in the previous 12 months, 3 or more major life events; 22% to 26% lived in households with a drug or alcohol problem; and 18% were exposed to domestic violence (41% were ever‐exposed to age 10). At school, nearly 40% of children were bullied. Over 45% of children aged 6 to 10 years were exposed to 6 or more risks for mental illness. Few children (< 2%) were exposed to low parental warmth and, despite the high exposure to adversities, less than 5% of children report low self‐confidence. This suggests considerable resilience. More than 1 in 4 children had conduct problems in the clinical range and more than 1 in 5 were experiencing high psychological distress.

The interrelatedness of multiple forms of childhood abuse, neglect, and household dysfunction.

Robert Anda,  Christopher Thompson,  Vincent Felitti … (2004)
Childhood abuse and other adverse childhood experiences (ACEs) have historically been studied individually, and relatively little is known about the co-occurrence of these events. The purpose of this study is to examine the degree to which ACEs co-occur as well as the nature of their co-occurrence. We used data from 8,629 adult members of a health plan who completed a survey about 10 ACEs which included: childhood abuse (emotional, physical, and sexual), neglect (emotional and physical), witnessing domestic violence, parental marital discord, and living with substance abusing, mentally ill, or criminal household members. The bivariate relationship between each of these 10 ACEs was assessed, and multivariate linear regression models were used to describe the interrelatedness of ACEs after adjusting for demographic factors. Two-thirds of participants reported at least one ACE; 81%-98% of respondents who had experienced one ACE reported at least one additional ACE (median: 87%). The presence of one ACE significantly increased the prevalence of having additional ACEs, elevating the adjusted odds by 2 to 17.7 times (median: 2.8). The observed number of respondents with high ACE scores was notably higher than the expected number under the assumption of independence of ACEs (p <.0001), confirming the statistical interrelatedness of ACEs. The study provides strong evidence that ACEs are interrelated rather than occurring independently. Therefore, collecting information about exposure to other ACEs is advisable for studies that focus on the consequences of a specific ACE. Assessment of multiple ACEs allows for the potential assessment of a graded relationship between these childhood exposures and health and social outcomes.

Childhood abuse, household dysfunction, and the risk of attempted suicide throughout the life span: findings from the Adverse Childhood Experiences Study.