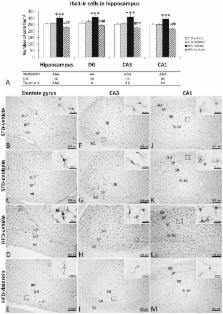 Soy extracts have been claimed to be neuroprotective against brain insults, an effect related to the estrogenic properties of isoflavones. However, the effects of individual isoflavones on obesity-induced disruption of adult neurogenesis have not yet been analyzed. In the present study we explore the effects of pharmacological administration of daidzein, a main soy isoflavone, in cell proliferation, cell apoptosis and gliosis in the adult hippocampus of animals exposed to a very high-fat diet. Rats made obese after 12-week exposure to a standard or high-fat (HFD, 60%) diets were treated with daidzein (50 mg kg −1) for 13 days. Then, plasma levels of metabolites and metabolic hormones, cell proliferation in the subgranular zone of the dentate gyrus (SGZ), and immunohistochemical markers of hippocampal cell apoptosis (caspase-3), gliosis (GFAP and Iba-1), food reward factor FosB and estrogen receptor alpha (ERα) were analyzed. Treatment with daidzein reduced food/caloric intake and body weight gain in obese rats. This was associated with glucose tolerance, low levels of HDL-cholesterol, insulin, adiponectin and testosterone, and high levels of leptin and 17β-estradiol. Daidzein increased the number of phospho-histone H3 and 5-bromo-2-deoxyuridine (BrdU)-ir cells detected in the SGZ of standard diet and HFD-fed rats. Daidzein reversed the HFD-associated enhanced immunohistochemical expression of caspase-3, FosB, GFAP, Iba-1 and ERα in the hippocampus, being more prominent in the dentate gyrus. These results suggest that pharmacological treatment with isoflavones regulates metabolic alterations associated with enhancement of cell proliferation and reduction of apoptosis and gliosis in response to high-fat diet.

Estrogen stimulates a transient increase in the number of new neurons in the dentate gyrus of the adult female rat.

Patima Tanapat,  Nicholas B. Hastings,  Alison J Reeves … (1999)
To determine whether a sex difference exists in the production of hippocampal cells during adulthood, we examined proliferating cells and their progeny in adult rats using the thymidine analog bromodeoxyuridine (BrdU) combined with immunohistochemistry for markers of neurons and glia. Additionally, to determine whether ovarian hormones affect cell proliferation, we examined the numbers of BrdU-labeled cells at different estrous cycle stages and after ovarian steroid manipulation. Stereological analyses of the numbers of BrdU-labeled cells revealed that females produced more cells than males in the dentate gyrus but not in the subventricular zone. The production of new hippocampal cells in females appears to be affected by ovarian hormone levels; ovariectomy diminished the number of BrdU-labeled cells, an effect reversed by estrogen replacement. A natural fluctuation in cell proliferation was also noted; females produced more cells during proestrus (when estrogen levels are highest) compared with estrus and diestrus. Many of these cells acquired neuronal characteristics, including the formation of dendrites and expression of Turned-On-After-Division 64 kDa, a marker of immature granule neurons, and the calcium-binding protein calbindin, a marker of mature granule neurons. However, examination of the numbers of pyknotic cells and the numbers of BrdU-labeled cells at longer survival times revealed that many new cells in the dentate gyrus eventually degenerate. Consistently the number of labeled cells in females is no longer higher than that observed in males by 2 weeks after the last BrdU injection. These findings suggest that estrogen-enhanced cell proliferation during proestrus results in more immature neurons in the hippocampal formation of females compared with males and present the possibility that these new cells exert an important influence on hippocampal function.

Y Hojo,  T.-a. Hattori,  T Enami … (2004)
In adult mammalian brain, occurrence of the synthesis of estradiol from endogenous cholesterol has been doubted because of the inability to detect dehydroepiandrosterone synthase, P45017alpha. In adult male rat hippocampal formation, significant localization was demonstrated for both cytochromes P45017alpha and P450 aromatase, in pyramidal neurons in the CA1-CA3 regions, as well as in the granule cells in the dentate gyrus, by means of immunohistochemical staining of slices. Only a weak immunoreaction of these P450s was observed in astrocytes and oligodendrocytes. ImmunoGold electron microscopy revealed that P45017alpha and P450 aromatase were localized in pre- and postsynaptic compartments as well as in the endoplasmic reticulum in principal neurons. The expression of these cytochromes was further verified by using Western blot analysis and RT-PCR. Stimulation of hippocampal neurons with N-methyl-d-aspartate induced a significant net production of estradiol. Analysis of radioactive metabolites demonstrated the conversion from [(3)H]pregnenolone to [(3)H]estradiol through dehydroepiandrosterone and testosterone. This activity was abolished by the application of specific inhibitors of cytochrome P450s. Interestingly, estradiol was not significantly converted to other steroid metabolites. Taken together with our previous finding of a P450scc-containing neuronal system for pregnenolone synthesis, these results imply that 17beta-estradiol is synthesized by P45017alpha and P450 aromatase localized in hippocampal neurons from endogenous cholesterol. This synthesis may be regulated by a glutamate-mediated synaptic communication that evokes Ca(2+) signals.

Regulation of gene expression and cocaine reward by CREB and DeltaFosB.

Colleen A. McClung,  Eric J. Nestler (2003)
DeltaFosB (a truncated form of FosB) and CREB (cAMP response element binding protein) are transcription factors induced in the brain's reward pathways after chronic exposure to drugs of abuse. However, their mechanisms of action and the genes they regulate remain unclear. Using microarray analysis in the nucleus accumbens of inducible transgenic mice, we found that CREB and a dominant-negative CREB have opposite effects on gene expression, as do prolonged expression of DeltaFosB and the activator protein-1 (AP-1) antagonist DeltacJun. However, unlike CREB, short-term and prolonged DeltaFosB induction had opposing effects on gene expression. Gene expression induced by short-term DeltaFosB and by CREB was strikingly similar, and both reduced the rewarding effects of cocaine, whereas prolonged DeltaFosB expression increased drug reward. Gene expression after a short cocaine treatment was more dependent on CREB, whereas gene expression after a longer cocaine treatment became increasingly DeltaFosB dependent. These findings help define the molecular functions of CREB and DeltaFosB and identify clusters of genes that contribute to cocaine addiction.