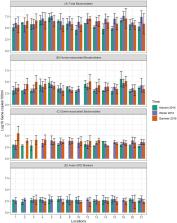 Taihu Lake is one of the largest freshwater lakes in China, serving as an important source of drinking water; >60% of source water to this lake is provided by the Tiaoxi River. This river faces serious fecal contamination issues, and therefore, a comprehensive investigation to identify the sources of fecal contamination was carried out and is presented here. The performance of existing universal (BacUni and GenBac), human (HF183-Taqman, HF183-SYBR, BacHum, and Hum2), swine (Pig-2-Bac), ruminant (BacCow), and avian (AV4143 and GFD) associated microbial source tracking (MST) markers was evaluated prior to their application in this region. The specificity and sensitivity results indicated that BacUni, HF183-TaqMan, Pig-2-Bac, and GFD assays are the most suitable in identifying human and animal fecal contamination. Therefore, these markers along with marker genes specific to selected bacterial pathogens were quantified in water and sediment samples of the Tiaoxi River, collected from 15 locations over three seasons during 2014 and 2015. Total/universal Bacteroidales markers were detected in all water and sediment samples (mean concentration 6.22 log 10 gene copies/100 ml and 6.11 log 10 gene copies/gram, respectively), however, the detection of host-associated MST markers varied. Human and avian markers were the most frequently detected in water samples (97 and 89%, respectively), whereas in sediment samples, only human-associated markers were detected more often (86%) than swine (64%) and avian (8.8%) markers. The results indicate that several locations in the Tiaoxi River are heavily polluted by fecal contamination and this correlated well with land use patterns. Among the five bacterial pathogens tested, Shigella spp. and Campylobacter jejuni were the most frequently detected pathogens in water (60% and 62%, respectively) and sediment samples (91% and 53%, respectively). Shiga toxin-producing Escherichia coli (STEC) and pathogenic Leptospira spp. were less frequently detected in water samples (55% and 33%, respectively) and sediment samples (51% and 13%, respectively), whereas E. coli O157:H7 was only detected in sediment samples (11%). Overall, the higher prevalence and concentrations of Campylobacter jejuni, Shigella spp., and STEC, along with the MST marker detection at a number of locations in the Tiaoxi River, indicates poor water quality and a significant human health risk associated with this watercourse. 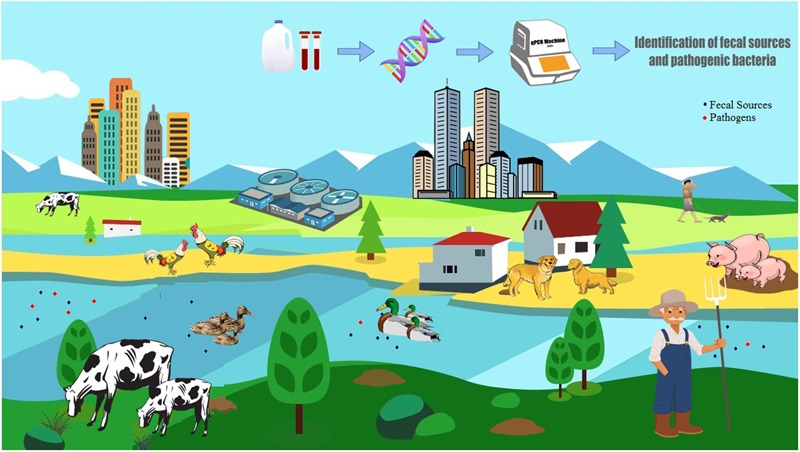 Z Layton,  James V. Garrett,  Dan Williams … (2006)
Bacteroides species are promising indicators for differentiating livestock and human fecal contamination in water because of their high concentration in feces and potential host specificity. In this study, a real-time PCR assay was designed to target Bacteroides species (AllBac) present in human, cattle, and equine feces. Direct PCR amplification (without DNA extraction) using the AllBac assay was tested on feces diluted in water. Fecal concentrations and threshold cycle were linearly correlated, indicating that the AllBac assay can be used to estimate the total amount of fecal contamination in water. Real-time PCR assays were also designed for bovine-associated (BoBac) and human-associated (HuBac) Bacteroides 16S rRNA genes. Assay specificities were tested using human, bovine, swine, canine, and equine fecal samples. The BoBac assay was specific for bovine fecal samples (100% true-positive identification; 0% false-positive identification). The HuBac assay had a 100% true-positive identification, but it also had a 32% false-positive rate with potential for cross-amplification with swine feces. The assays were tested using creek water samples from three different watersheds. Creek water did not inhibit PCR, and results from the AllBac assay were correlated with those from Escherichia coli concentrations (r2= 0.85). The percentage of feces attributable to bovine and human sources was determined for each sample by comparing the values obtained from the BoBac and HuBac assays with that from the AllBac assay. These results suggest that real-time PCR assays without DNA extraction can be used to quantify fecal concentrations and provide preliminary fecal source identification in watersheds.

Cyril Carroll,  Leigh Murphy,  Carly N. Jordan (2006)
Campylobacter spp. continue to be the greatest cause of bacterial gastrointestinal infections in humans worldwide. They encounter many stresses in the host intestinal tract, on foods and in the environment. However, in common with other enteric bacteria, they have developed survival mechanisms to overcome these stresses. Many of the survival mechanisms used by Campylobacter spp. differ from those used by other bacteria, such as Escherichia coli and Salmonella spp. This review summarizes the mechanisms by which Campylobacter spp. adapt to stress conditions and thereby increase their ability to survive on food and in the environment.

This article was submitted to Aquatic Microbiology, a section of the journal Frontiers in Microbiology