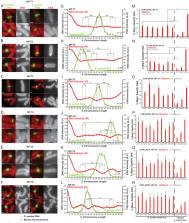 During mitosis chromosomes reorganise into highly compact, rod-shaped forms, thought to consist of consecutive chromatin loops around a central protein scaffold. Condensin complexes are involved in chromatin compaction, but the contribution of other chromatin proteins, DNA sequence and histone modifications is less understood. A large region of fission yeast DNA inserted into a mouse chromosome was previously observed to adopt a mitotic organisation distinct from that of surrounding mouse DNA. Here, we show that a similar distinct structure is common to a large subset of insertion events in both mouse and human cells and is coincident with the presence of high levels of heterochromatic H3 lysine nine trimethylation (H3K9me3). Hi-C and microscopy indicate that the heterochromatinised fission yeast DNA is organised into smaller chromatin loops than flanking euchromatic mouse chromatin. We conclude that heterochromatin alters chromatin loop size, thus contributing to the distinct appearance of heterochromatin on mitotic chromosomes.

Job Dekker,  Leonid A. Mirny,  Maxim Imakaev … (2013)
Mitotic chromosomes are among the most recognizable structures in the cell, yet for over a century their internal organization remains largely unsolved. We applied chromosome conformation capture methods, 5C and Hi-C, across the cell cycle and revealed two distinct three-dimensional folding states of the human genome. We show that the highly compartmentalized and cell type-specific organization described previously for nonsynchronous cells is restricted to interphase. In metaphase, we identified a homogenous folding state that is locus-independent, common to all chromosomes, and consistent among cell types, suggesting a general principle of metaphase chromosome organization. Using polymer simulations, we found that metaphase Hi-C data are inconsistent with classic hierarchical models and are instead best described by a linearly organized longitudinally compressed array of consecutive chromatin loops.

Differential contributions of condensin I and condensin II to mitotic chromosome architecture in vertebrate cells.

Michael Myers,  Ana Paula Losada,  Andrew Neuwald … (2003)
The canonical condensin complex (henceforth condensin I) plays an essential role in mitotic chromosome assembly and segregation from yeast to humans. We report here the identification of a second condensin complex (condensin II) from vertebrate cells. Condensins I and II share the same pair of structural maintenance of chromosomes (SMC) subunits but contain different sets of non-SMC subunits. siRNA-mediated depletion of condensin I- or condensin II-specific subunits in HeLa cells produces a distinct, highly characteristic defect in chromosome morphology. Simultaneous depletion of both complexes causes the severest defect. In Xenopus egg extracts, condensin I function is predominant, but lack of condensin II results in the formation of irregularly shaped chromosomes. Condensins I and II show different distributions along the axis of chromosomes assembled in vivo and in vitro. We propose that the two condensin complexes make distinct mechanistic contributions to mitotic chromosome architecture in vertebrate cells.

Understanding the relationship between DNA methylation and histone lysine methylation☆