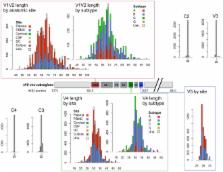 The V3 loop of the HIV-1 Env protein is the primary determinant of viral coreceptor usage, whereas the V1V2 loop region is thought to influence coreceptor binding and participate in shielding of neutralization-sensitive regions of the Env glycoprotein gp120 from antibody responses. The functional properties and antigenicity of V1V2 are influenced by changes in amino acid sequence, sequence length and patterns of N-linked glycosylation. However, how these polymorphisms relate to HIV pathogenesis is not fully understood. We examined 5185 HIV-1 gp120 nucleotide sequence fragments and clinical data from 154 individuals (152 were infected with HIV-1 Subtype B). Sequences were aligned, translated, manually edited and separated into V1V2, C2, V3, C3, V4, C4 and V5 subregions. V1-V5 and subregion lengths were calculated, and potential N-linked glycosylation sites (PNLGS) counted. Loop lengths and PNLGS were examined as a function of time since infection, CD4 count, viral load, and calendar year in cross-sectional and longitudinal analyses. V1V2 length and PNLGS increased significantly through chronic infection before declining in late-stage infection. In cross-sectional analyses, V1V2 length also increased by calendar year between 1984 and 2004 in subjects with early and mid-stage illness. Our observations suggest that there is little selection for loop length at the time of transmission; following infection, HIV-1 adapts to host immune responses through increased V1V2 length and/or addition of carbohydrate moieties at N-linked glycosylation sites. V1V2 shortening during early and late-stage infection may reflect ineffective host immunity. Transmission from donors with chronic illness may have caused the modest increase in V1V2 length observed during the course of the pandemic.

The HIV envelope gene ( env) encodes viral surface proteins (Env) that are vital to the basic processes used by the virus to infect and cause disease in humans. Adaptations in env determine which cells the virus can infect, and permit the virus to avoid elimination by the immune system. Env is one of the most variable genes known, and it can change dramatically over time in a single individual. However, Env-host cell interactions are complex and incompletely understood, and changes in this viral protein during infection have not yet been systematically described. We examined a large number of env sequences from 154 individuals at various stages of HIV infection but who had never received antiretroviral treatment. We found that the env V1V2 region lengthens during chronic infection and becomes more heavily glycosylated. However, these changes partially reverse during late-stage illness, possibly in response to a weakening host immune system. V1V2 lengths are also increasing over time in the epidemic at large, possibly related to the epidemiology of HIV transmission within the subtype B epidemic. These results provide fundamental insights into the biology of HIV.

K Liang,  S Zeger,  David Shay (1986)
Longitudinal data sets are comprised of repeated observations of an outcome and a set of covariates for each of many subjects. One objective of statistical analysis is to describe the marginal expectation of the outcome variable as a function of the covariates while accounting for the correlation among the repeated observations for a given subject. This paper proposes a unifying approach to such analysis for a variety of discrete and continuous outcomes. A class of generalized estimating equations (GEEs) for the regression parameters is proposed. The equations are extensions of those used in quasi-likelihood (Wedderburn, 1974, Biometrika 61, 439-447) methods. The GEEs have solutions which are consistent and asymptotically Gaussian even when the time dependence is misspecified as we often expect. A consistent variance estimate is presented. We illustrate the use of the GEE approach with longitudinal data from a study of the effect of mothers' stress on children's morbidity.

Evidence of HIV-1 adaptation to HLA-restricted immune responses at a population level.

S Mallal,  Mina John,  Mark I. James … (2002)
Antigen-specific T cell immunity is HLA-restricted. Human immunodeficiency virus-type 1 (HIV-1) mutations that allow escape from host immune responses may therefore be HLA allele-specific. We analyzed HIV-1 reverse transcriptase sequences from a large HLA-diverse population of HIV-1-infected individuals. Polymorphisms in HIV-1 were most evident at sites of least functional or structural constraint and frequently were associated with particular host HLA class I alleles. Absence of polymorphism was also HLA allele-specific. At a population level, the degree of HLA-associated selection in viral sequence was predictive of viral load. These results support a fundamental role for HLA-restricted immune responses in driving and shaping HIV-1 evolution in vivo.

Publisher ID: 10-PLPA-RA-3405R2
DOI: 10.1371/journal.ppat.1001228
PMC ID: 3002983
PubMed ID: 21187897
Copyright statement: Curlin et al. This is an open-access article distributed under the terms of the Creative Commons Attribution License, which permits unrestricted use, distribution, and reproduction in any medium, provided the original author and source are credited.